Samsung unveiled two of the most talked-about smartphones in its grand history earlier this month at Mobile World Congress — the Galaxy S6 and curved-screen Galaxy S6 Edge.

It was plain to see from the earliest leaked images of the new S6 that Samsung had hit upon some new design inspiration in the new phones. Samsung called the design process of the new phones “emotional,” and stressed the process was governed by an emphasis on “meaningful innovation” and “purposeful design.”

After using the phones for awhile I can see they weren’t just blowing smoke. The new S6 is a 5.1-inch screened smartphone with rounded edges, while the new S6 Edge is a similar phone with the same-size screen, but one that curves downward at both sides of the phone.

Some reviewers have complained about the feel of the curved-screen S6 Edge in the hand, but it’s very subjective: I like the narrower metal sides of the Edge, which is caused by the glass sloping downward from sides of the display. It makes the phone easier to grip. 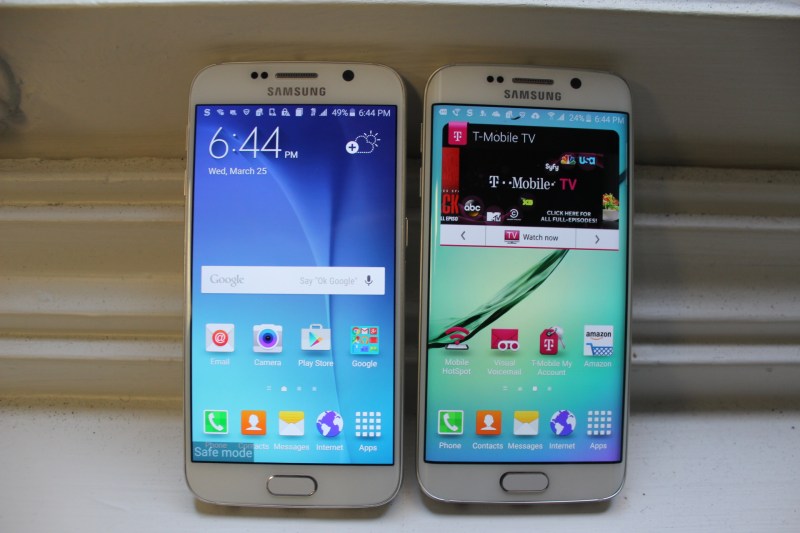 The display is beautiful

After watching some HD video on both phones, I’m impressed at how beautiful the picture is. This is Samsung playing one of its strong suits: displays. The 5.1-inch displays on the phones are 577 pixels-per-inch HD super-AMOLED. They’re brighter than in earlier Samsung devices, so that they’re easier to see in sunlit conditions. 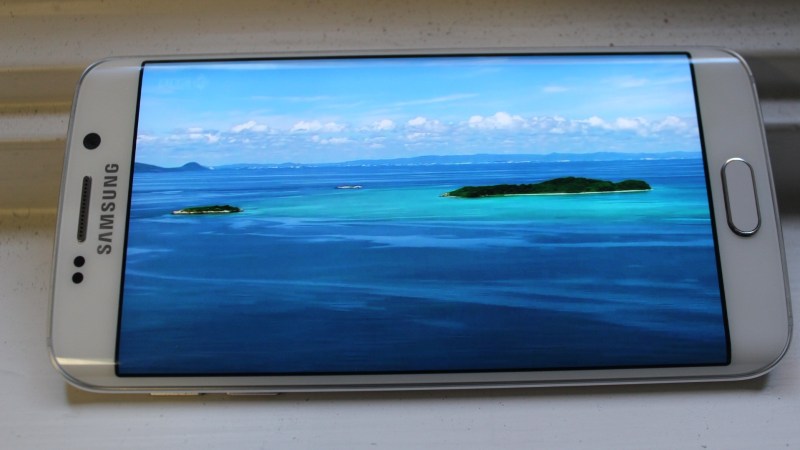 Above: Video looked pretty stellar on the S6 display.

On the S6 Edge it seems to me that video appeared just as big as on the flat-screened S6, even though the top and bottom edges (when in landscape view) roll back from the flat surface. The curved edges create the illusion that the Edge is a smaller phone than the S6, but it really isn’t — it’s just a different shape.

Both the S6 and the S6 Edge run on Samsung processors, not Qualcomm Snapdragon processors, as had been expected. Samsung has a large-scale chip foundry that uses a cutting-edge 14-nanometer process to push the number of transistors in the tiny mobile chips to new levels.

And the S6 is fast. I turned on some HD video in split screen mode and began to launch apps and navigate around. I noticed no lag at all — the touch screen was very responsive, and apps opened and responded quickly. 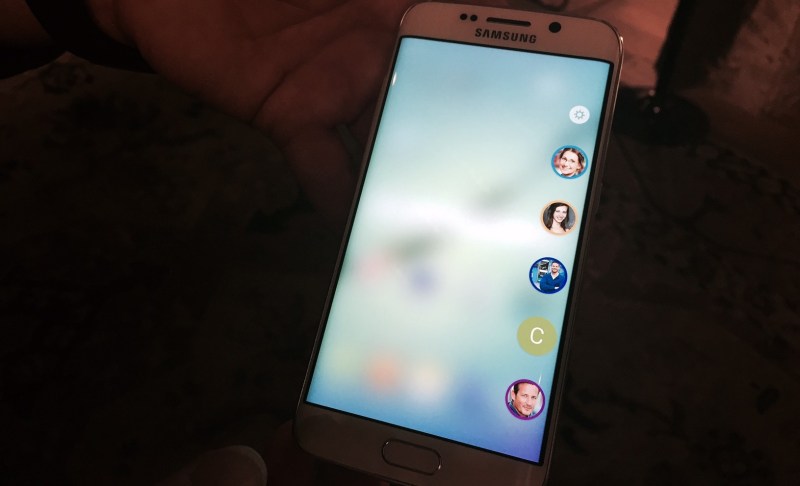 Above: One use of the curved sides of the screen is the presentation of five of your best friends or social contacts. You can also instruct the phone to emit different colors of light for each of your friends when they call.

The UI stays out of its own way

Earlier Galaxy S series phones had taken criticism for including a lot of bloatware in the build — software apps, widgets, and features that got in the way of navigating and accessing the core functions of the phone.

Samsung’s new focus on simplicity and purposeful design is very evident in the interface design of these new phones. The company has dialed its TouchWiz Android overlay way back, so that you see a lot more of Android’s elegant “Material Design” and less clutter on top.

TouchWiz seems to have been stripped down to a limited set of features that can legitimately help productivity. For instance, the screen-splitting feature lets you pull a phone number from an email and then punch it into a phone dialer that’s also visible on the screen. You can also save the number in a little bookmark on the home screen for dialing later.

A Samsung person told me the company has been trying to rediscover the old “desktop” paradigm of the PC age in its phones, where users organize content and tools on a home screen for maximum productivity. 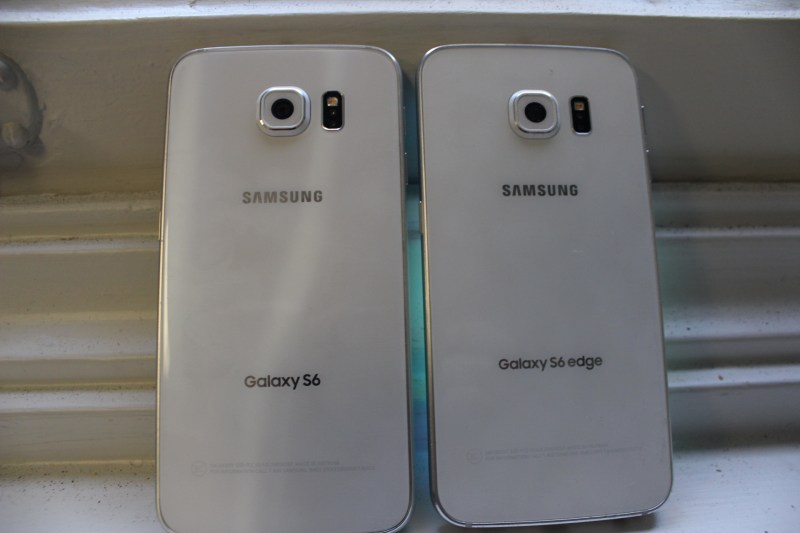 Above: From the back the phones look almost identical. Notice that the camera is raised a couple of millimeters off the back surface of the phones.

I was impressed again in my tests of the camera. Both the S6 and the S6 Edge have dual-lens 16-megapixel cameras on their backsides, with F1.9 shutter speed.

The camera has something called auto real-time HDR, which Samsung says reduces shutter lag. White balance is detected by a sensor and auto-corrected. Image stabilization software helps reduce shakey-cam. An autofocus feature puts a square around faces and follows them when you’re shooting people in motion (although I had mixed results when I tested this).

In a head-to-head test between cameras on the iPhone 6 and the Galaxy S6, I couldn’t help but notice the difference in the image clarity, detail, and white balance. The Samsung’s camera produced a brighter shot that is, I think, a bit more true to life than the iPhone’s shot. The iPhone 6 produced an image that was sharp and pleasing to the eye, with a more dramatic light/dark balance. 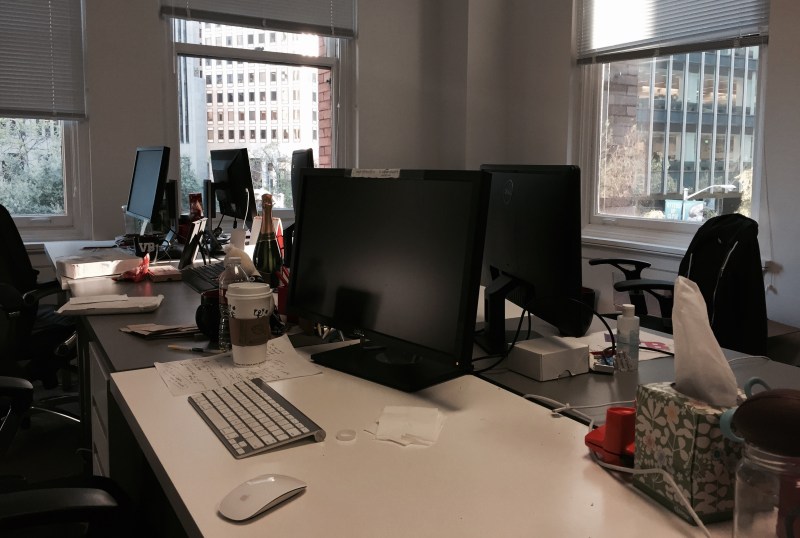 Above: Photo of the VentureBeat office taken with the Apple iPhone 6. 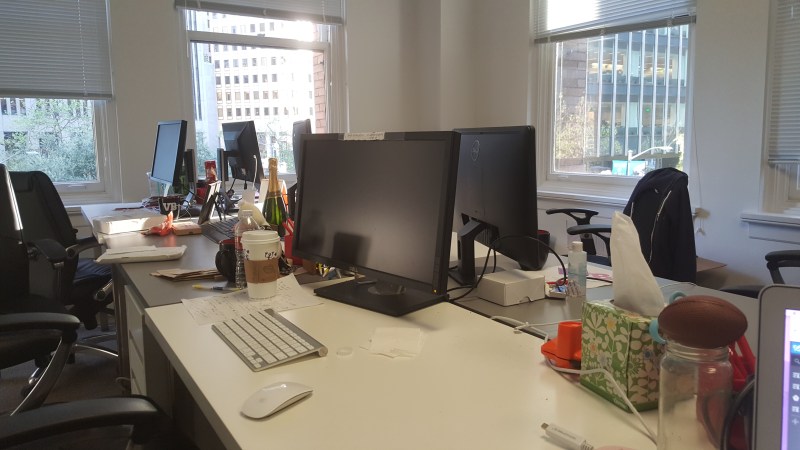 Above: Photo of the VentureBeat office taken with the Samsung Galaxy S6 Edge.

The front camera on the S6 phones is 5-megapixel, more than enough for selfies and video chats. This camera also has F1.9 shutter speed for more light, as well as auto real-time HDR.

Both the S6 and the S6 Edge have integrated wireless charging built in, so there is no need for adapters. The phones support both the WPC and PMA wireless charging standards. Samsung says the phones wirelessly charge their batteries to 20 percent capacity in 30 minutes. 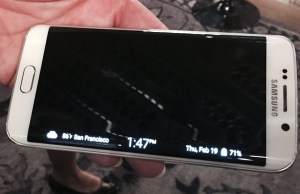 Above: For certain interface functions, the curved edges work independently of the rest of the screen.

Samsung also jacked up the speaker volume in the S6 and S6 Edge. I can attest to its loudness — it’s clearly louder than the speaker in my iPhone 6 — but I did notice a bit of distortion at high volume levels.

The new Galaxy phones got an updated fingerprint reader, which is used to log into the phone and for mobile payments. After spending a few minutes resting my thumb and finger on the reader during set-up, the reader responded very quickly and accurately to my touch. The set-up process was similar to that of the iPhone 6, although the S6 reader might be just a hair faster to respond than Apple’s NXP reader.

This improved fingerprint reader will become even more important later this year when Samsung launches its new Samsung Pay mobile payments platform. The new service will be based in part on technology from a company Samsung bought called LoopPay. This technology is more versatile, Samsung said, than that of Apple Pay or Android Pay (as it will soon be called), in that it can do near field communications (NFC), magnetic strip, and barcode mobile payments. Google and Apple support only NFC payments.

Samsung Pay will launch on Galaxy S6 and Galaxy S6 Edge in the United States during the second half of this year. 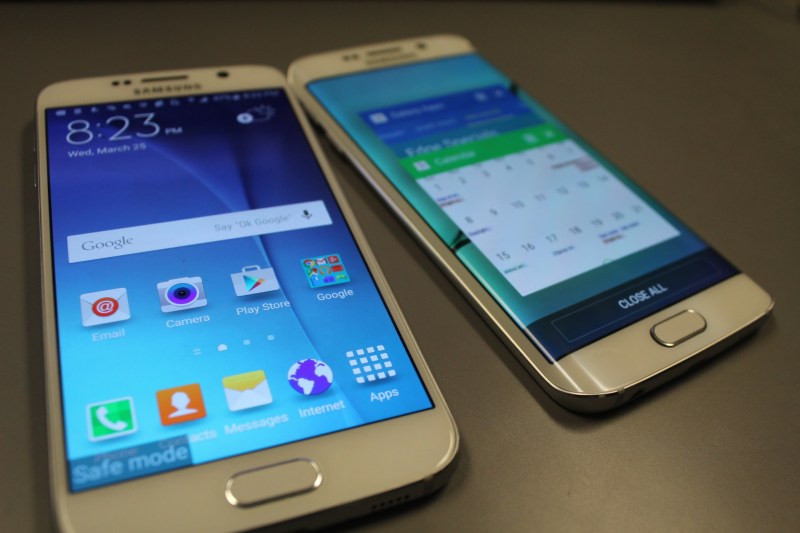 As you will hear many reviewers say, the S6 phones (deservedly) get some points taken away for having no removable battery and for not offering an SD card port for additional storage.

But the improved design of the phones, and the simplification of the user interface from earlier Galaxy S series phones, will offset those criticisms for most people.

Samsung is hoping the phones will bring back some of the mojo its mobile devices business has lost over the past 18 months in the face of new releases from rival Apple. I think they might well wrest some of that mojo back.

But the curved screen of the Edge won’t be the killer design innovation Samsung had with its outsized “phablet” devices back in 2011 (which people loved and other smartphone makers, including Apple, eventually copied). We might have to wait until next year when Samsung thrills us again with the introduction of mobile devices with folding screens.