For an entire week, I’ve forced myself to live more actively — and not because I read a quote on Instagram that inspired me be healthy. Nope, it’s because I was testing Samsung’s new Gear Fit 2.

I have a complicated relationship with fitness — I’ve struggled for a long time to make fitness part of my daily routine — and I hoped the Fit 2 might help me fix it, for only $179. And to some degree, it did.

With the Fit 2 on my wrist, I walked everywhere I could instead of taking the bus in order to reach my steps goal. I tracked how much water I drank (OK, just for the first two days) and my caffeine intake (for the first day). The Fit 2 also helped me realize how much sleep I was getting (very little). But the highlight of my experience was that I went to the gym and remained active for nearly a week.

If the Fit 2 was designed to motivate its owner and look pretty good while doing it, then good work, Samsung; you succeeded. However, this device also has some serious flaws that need to be addressed — hopefully before the Fit 3.

The Fit 2 features a rubber strap, with no fancy leather or metal options, but it looks good for a fitness band. I easily styled it with different outfits and didn’t find it uncomfortable or embarrassing to wear at any point. 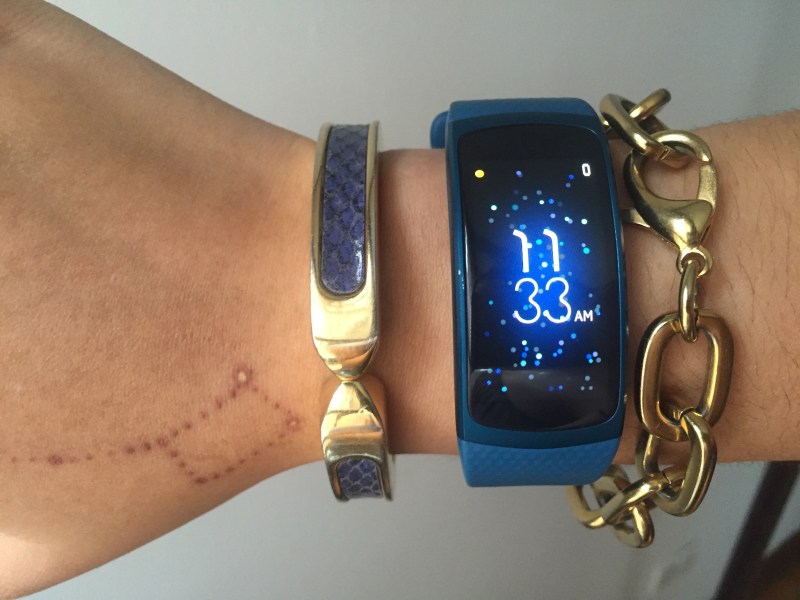 The curved, 1.5 inch display is truly beautiful, with sharp, colorful graphics that make it easy on the eyes while you’re navigating your fitness stats. Wider in comparison to its predecessor, the Fit 2’s interface stacks the layout upright by default instead of horizontal, so you don’t have to twist your head or arm to read it.

It doesn’t take long to get used to the Fit 2’s features and navigation buttons, but I struggled to take advantage of this wearable’s biggest selling point: activity tracking.

The first Gear Fit could only track four activities. The Fit 2, however, tracks 15 different exercises, including outdoor cardio, workout machines, and strength training. Running and elliptical training are tracked automatically, along with cycling, walking, and rowing — or so Samsung says.

The Fit 2 tracks steps, but all smartwatches, even those not fitness oriented, do that. The nice thing is that after about five minutes, the walking feature turns on “automatically” and tells you to keep up your pace — thanks!

Then it tells you your heart rate, the distance you walked, the calories you burned, and your average speed. 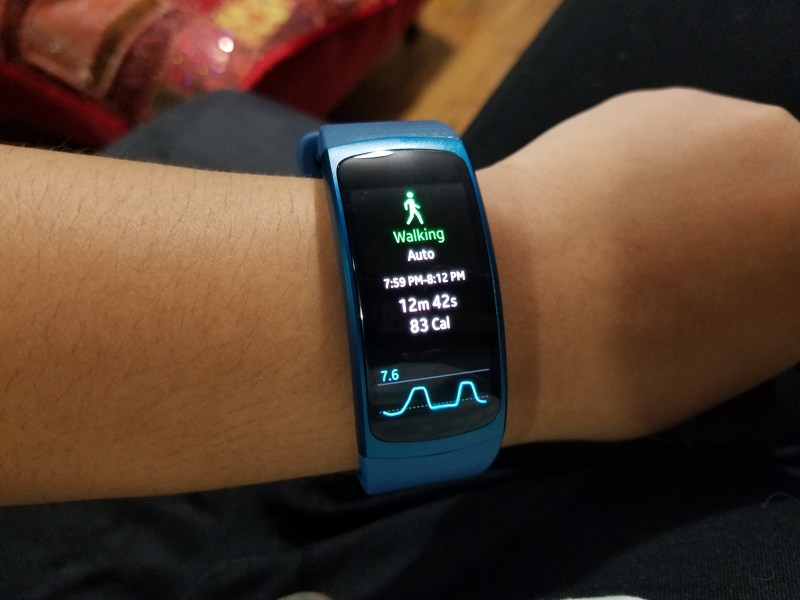 But I didn’t have much luck with automatic tracking while running. Maybe my running game is not on point, but I could not get the running feature to turn on automatically. I went to the park with the Fit 2’s battery at 15 percent, and after waiting 10 minutes for it to automatically detect my run, I gave up and turned it on manually. 15 minutes later, the battery life fell to 3 percent and I turned on power save mode, ending my workout. 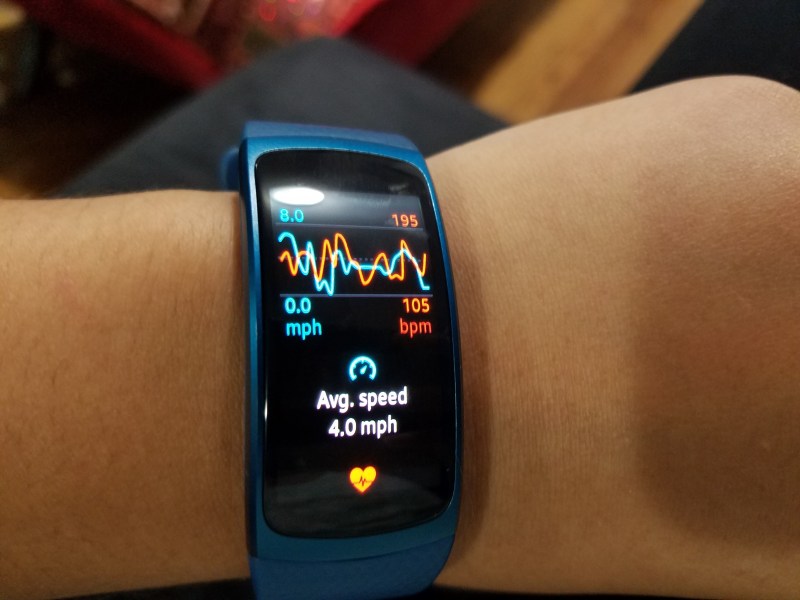 After the Fit 2 didn’t automatically track my run, I didn’t risk it with the elliptical. I adjusted my goal and went on the machine. When I stepped down, I was happy to see it had tracked my heart rate in detail — the ups and downs of the whole workout.

Then the Fit 2 said that I had burned only 131 calories, while the elliptical said I had burned almost double that. Bummer.

Doing yoga with the Fit 2 was a pleasant surprise; I usually think of yoga as just an opportunity to stretch, and never count it as part of my workout. However, tracking everything that happened to my body during yoga made me appreciate it more. Kudos for that.

Running and yoga aren’t the only ways to work your butt off, so I went to a Zumba class to see how the Fit 2 tracks off-beat workouts. Unsure of what exercise to pick, I selected “other workout” to track my dance moves. This might have been a poor choice, as that setting doesn’t track heart rate.

Six minutes later, when I realized this was the case, I changed the setting to walking mode. This was also a bad decision: 20 minutes later, the watch said I had burned eight calories. Are you kidding me? I switched the device back to “other workout” mode. 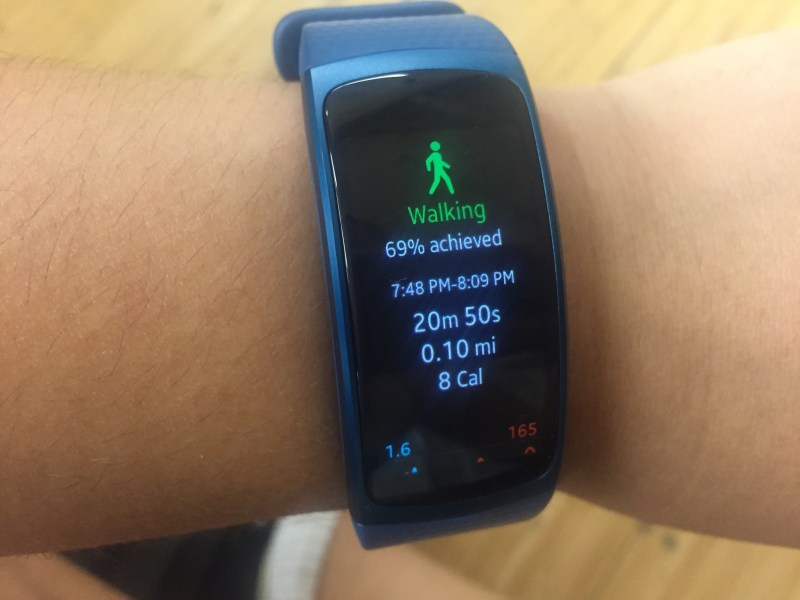 The Fit 2’s strength training monitoring could use some tweaking. After I hit start, the feature only displayed a timer, but did not track my heart rate during the activity. Once I was done, I could see the number of calories burned and an option to share my workout on Facebook. 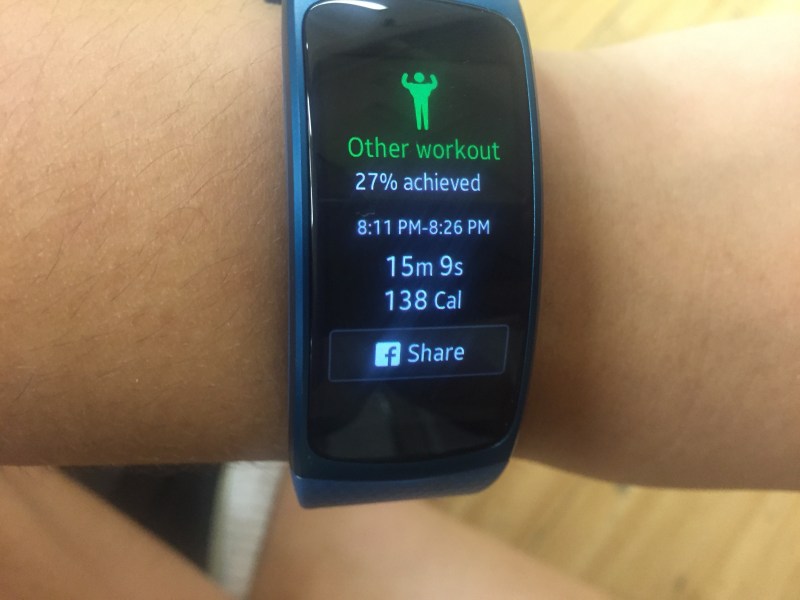 The Fit 2’s squats-tracking feature is simple. Select your target — repetition goal, time, or a general workout — and pick which wrist you’re wearing your watch on, then squat your butt off.

I did two sets of front barbell squats (with weights), only to notice the Fit 2 had counted just three repetitions altogether. Then I went for back squats, and the band only counted half of them. I picked up the phone Samsung lent us for this review — the Galaxy S7 Edge — from the floor to take a picture, and when I glanced back at the watch, I saw it had counted bending down for the phone as two squats. Only then did I realize the Fit 2 could only count squats in which you hold both of your arms in front of you. 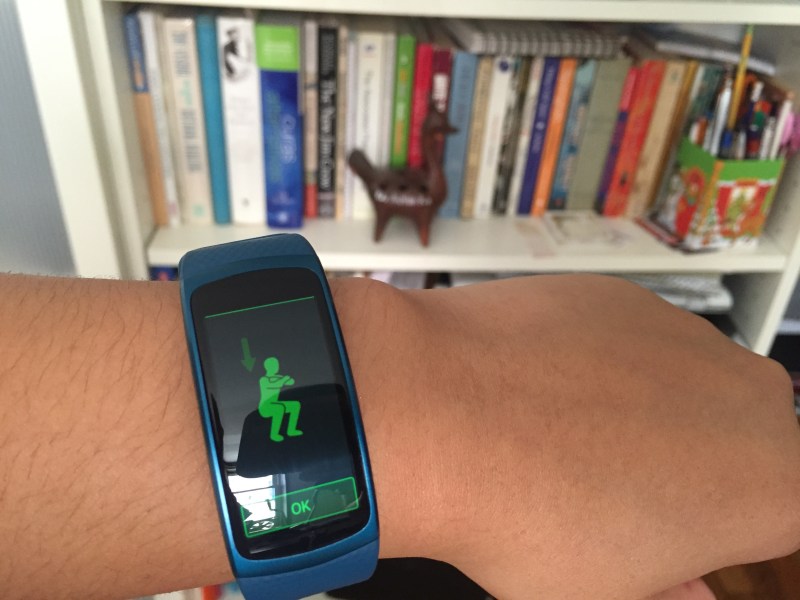 Four sets and 24 repetitions later, the band had counted 14 squats — including a few false positives. 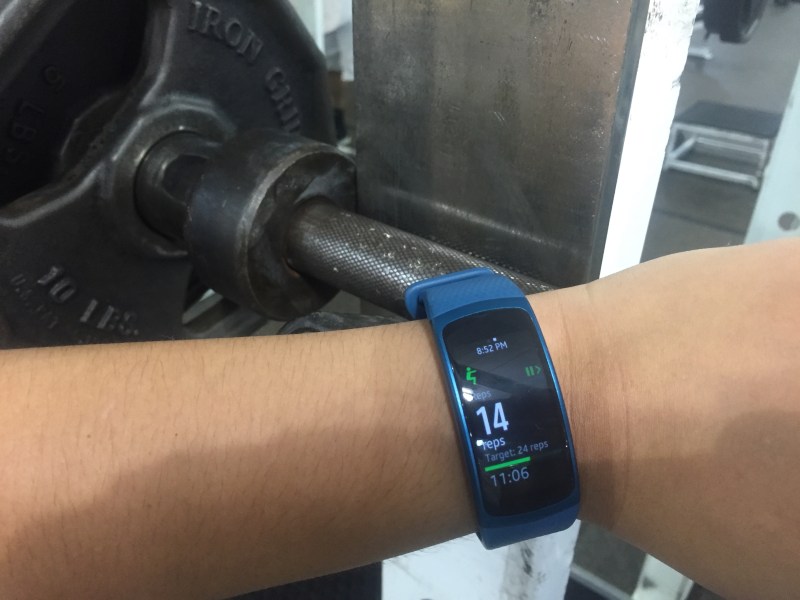 By design, the Fit 2’s crunch counter wouldn’t start until I lay on the floor and crossed my arms in front of my chest. The gadget successfully counted all of my regular, long arm, and knee crunches, but when I switched it up to crunch twists, the Fit 2 didn’t count them — nor did it count bicycle crunches.

Just like squats, you need to set a target, as well as the wrist you are wearing the Fit 2 on. What could go wrong when counting lunges? Nothing. It worked as promised. 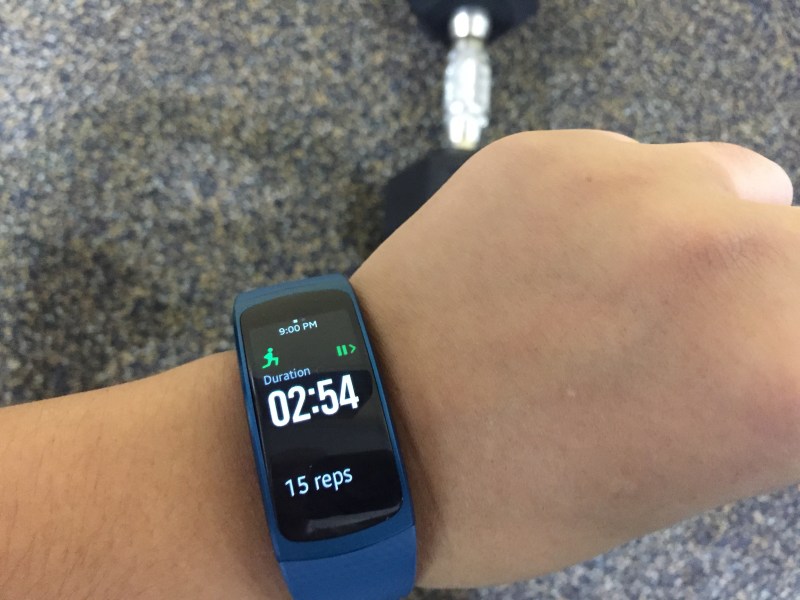 I went dancing one night and ignored the Fit 2 for a while. When I felt a little buzz on my wrist, there was my workout companion, telling me to keep up the healthy pace.

That made me smile. Then I realized the drink in my hand was probably not healthy at all.

Whenever I work out, music is key. But after using the Fit 2’s built-in music feature during a workout, I found it didn’t bring anything new to my experience.

The wearable’s native Spotify app left a lot to be desired — it’s simply a remote control that needs to be connected to your phone at all times. And just like my old TV remote, sometimes it doesn’t work. At times, the Fit 2 struggled to sync with the Spotify app on my phone; the wearable would say I was listening to Avicii when I was playing Jess Glynne, and it often wouldn’t let me change songs (not hating on Ms. Glynne).

The 4GB memory inside the Fit 2 also didn’t do much for my run, because I — like many people — don’t own music anymore; I usually just stream Pandora. You know those music geeks who have a playlist for every occasion? I am not one of them.

I ended up pairing my headset to my phone, where I could seamlessly listen to Pandora’s Latin workout station (which doesn’t work with the Fit 2 yet).

Battery life is always a struggle for me, and the last thing I want is to have to constantly charge everything. On a single charge, Fit 2’s battery lasted me approximately two and a half days (with GPS and Bluetooth on), which is pretty good considering the quality of the display.

Samsung proudly boasted about the Fit 2’s onboard GPS when it launched this month, as the feature was not available in the original Fit. While testing the device, I kept GPS on at all times, and it successfully tracked my walking distance as well as my average speed.

But I found the Fit 2’s maps frustrating. During and after my run, all I saw was a blue outline of where I went on a black-and-white grid. An actual map wouldn’t display on my watch until I synced it with the phone — even though the Fit 2 had been set up with my home Wi-Fi. Before that, all my maps looked like this: 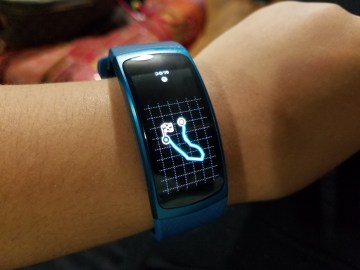 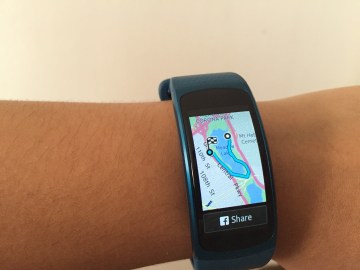 The Gear Fit 2 is a great fitness companion, but its music features and some of its activity-tracking functions seriously underdelivered. Maybe I had high expectations. But to my credit, those expectations were largely put there by Samsung itself.

This is purely a fitness band. It motivated me to reach targets and break my own records. And, maybe most importantly, I felt like a slacker when I got sick and couldn’t work out for two days.

This device, by the way, is compatible with any Android devices 4.4 and up, and the best way to realize its full potential is to sync it with Samsung Health. How unfortunate for you, iPhone users. 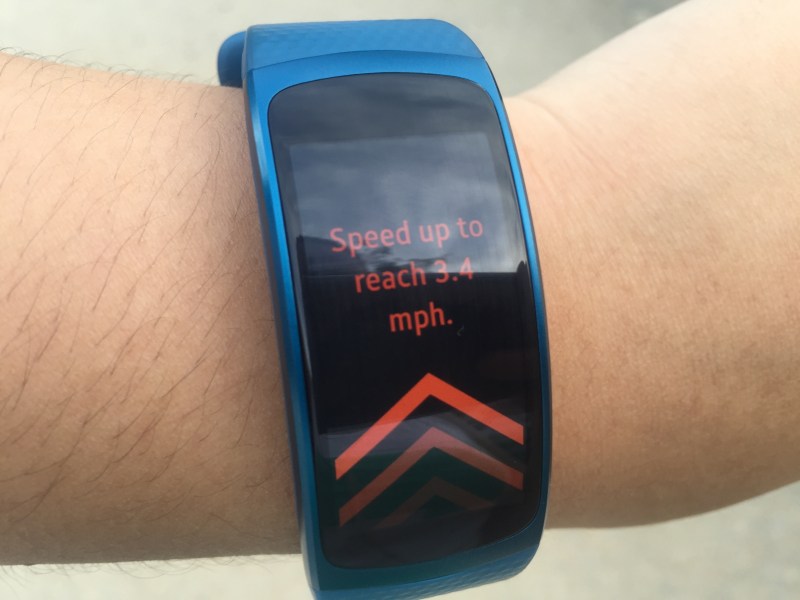 I could live — and work out — with the problems I see in the Fit 2. I just need to bring to expectations down a notch.

Now, if you’ll excuse me, I need to hit the gym.