And that assorted other “white box” manufacturers have now captured more market share than Apple, at 35.3 percent. 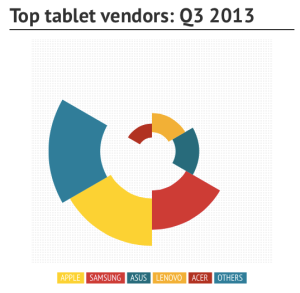 There is hope, however, for Apple, given its recent product announcements.

“With two 7.9-inch models starting at $299 and $399, and two 9.7-inch models starting at $399 and $499, Apple is taking steps to appeal to multiple segments,” Jitesh Ubrani, an IDC analyst, said in a statement. “While some undoubtedly hoped for more aggressive pricing from Apple, the current prices clearly reflect Apple’s ongoing strategy to maintain its premium status.”

Apple sold 14.1 million iPads in the past quarter, up only marginally from the 14 million it sold in the same quarter in 2012.

That means its market share dropped from 40.2 percent to 29.6 percent — a far cry from the education market share of 94 percent in the U.S. that Apple CEO Tim Cook crowed about in the company’s recent earnings call.

Part of the reason for Samsung’s success might, of course, be its pricing strategy — significantly cheaper than iPad. But the IDC says that there’s another factor: bundling. Samsung, the report says, “owes a measure of its tablet success to its ability to bundle them with other successful Samsung products, such as smartphones and televisions.”

Interestingly, the IDC buried Amazon — which makes the popular Kindle Fire — in the “other” category, which was bigger than Apple’s this quarter. HP, Microsoft, and Dell are also in this category. But the Kindle Fire has often been one of the most popular Android tablets.

Also in that category are the white-box manufacturers, which is good for Android units, but perhaps not so good for customer experience. 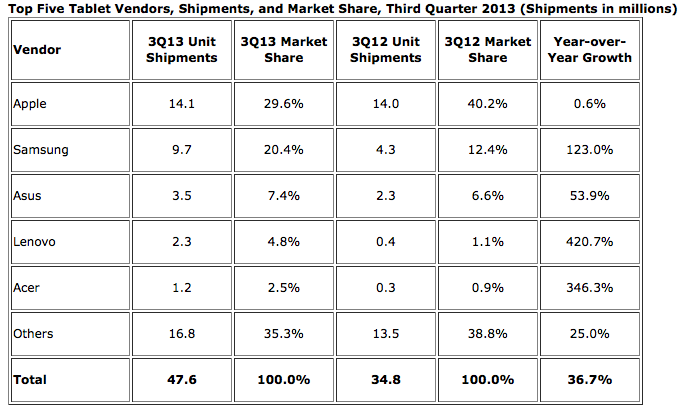 “White box tablet shipments continue to constitute a fairly large percentage of the Android devices shipped into the market,” said Tom Mainelli, IDC’s research director on tablets. “These low cost Android-based products make tablets available to a wider market of consumers, which is good. However, many use cheap parts and non Google-approved versions of Android that can result in an unsatisfactory customer experience, limited usage, and very little engagement with the ecosystem.”

Clearly that’s a market Apple is not interested in.