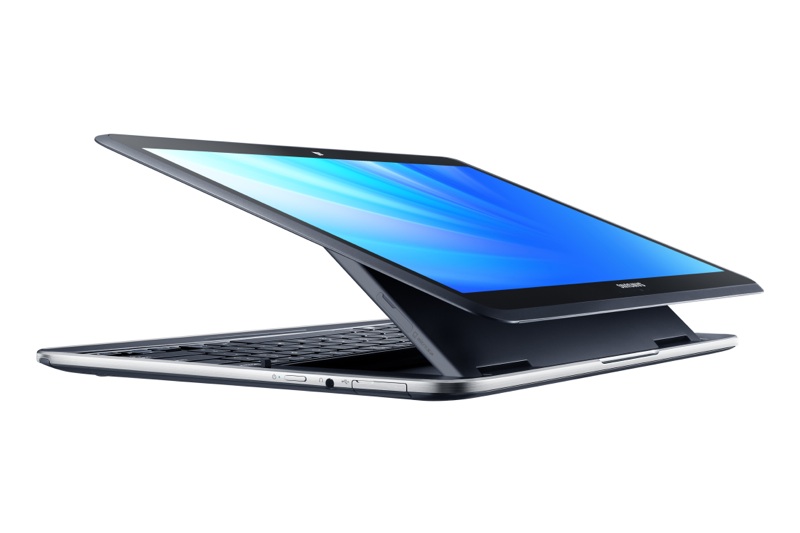 If you’ve been holding out for some interesting Windows 8 devices, Samsung’s latest lineup could be just for you.

Samsung just announced a new convertible Windows 8 laptop, the Ativ Q, as well as an incredibly thin tablet, the Ativ Tab 3, at its Premiere 2013 media event in London. Additionally, the company also announced two standard laptops — the Ativ Book 9 Plus and Ativ Book 9 Lite — as well as the all-in-one Ativ One Style 5 desktop.

“There’s a magic to pop-up books,” the event’s master of ceremonies said as he kicked off the event, which was fitting for the pop-up like Ativ Q.

The big draw of the Ativ Q is its screen hinge, which can place its 13.3-inch touch-screen display in four orientations: flat over the keyboard like a tablet, upright like a laptop, floating above the keyboard, and flipped all the way up (with the keyboard behind it like a stand). It also sports a sharp 3200 by 1800 pixel resolution, the highest for a display this size. The Ativ Q weighs only 2.8 pounds and measures 13.9 millimeters thick.

The Ativ Q can run Android apps right alongside Windows 8 (likely by taking advantage of Bluestacks’ technology). During an onstage demo, Samsung reps were able to flip between the Android home screen and Windows 8 Start screen instantly.

Whereas the Ativ Q is all about versatility, the Ativ Tab 3 is focused entirely on being the thinnest Windows 8 tablet on the market. It’s just 8.2 millimeters thick and weighs 1.2 pounds. Samsung claims it also has over 10 hours of battery life, which is typical for tablets.

Both machines also sport Samsung’s S Pen stylus. I’ve noticed for a while that Samsung has placed far more emphasis on its Note lineup compared to its standard Galaxy tablets over the last few years, so today’s announcements are yet another sign of the S Pen’s growing importance for Samsung.

Samsung didn’t offer up any pricing or availability details for either Ativ device today, but we expect to hear more in the next few months.