In its big analyst event in Korea last night, the electronics giant laid out its plans for the future and answered concerns about its current business. Most notably, Samsung says that by 2015 it will have mobile devices with foldable displays, and that it expects major advancements in its processor and memory technology, the Wall Street Journal’s live blog reports.

Out of nowhere, Samsung also made the term “phablet” seem a bit less obnoxious with its own term for big-screen phones, “fonblet.” The company claims it was the pioneer of that new category of phones with handwriting recognition.

Why all the early details? Samsung is likely trying to sway investors who may be worried about slowing smartphone sales (the Galaxy S4 reportedly didn’t sell as well as some had hoped, which led to a huge stock hit) by showing its hand a bit. And another bonus: Now it can say it’s been working on specific tech without copying Apple.

At CES earlier this year, Samsung hinted that foldable displays were coming soon (the company released a cheesy promo for a foldable phone). And it’s clear that Samsung is making strides towards the technology with the Galaxy Round, a phone with a curved display. According to Samsung’s timeline (below), we’ll see bendable displays next year, which will lead to foldable displays in 2015. 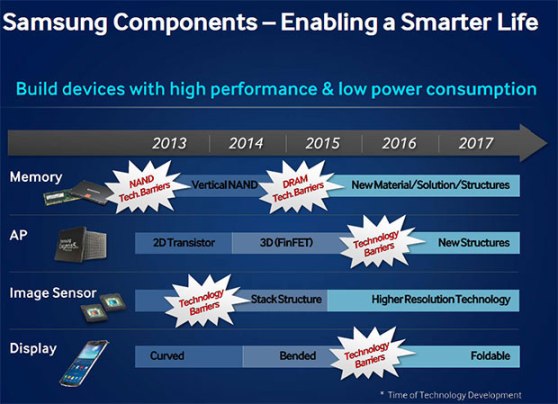 Folding displays could lead to a radical reinvention of the “flip phone,” where you can literally fold up a phone like a wallet. And both foldable and bendable displays will undoubtedly play a big role in wearable gadgets (imagine how much better the Galaxy Gear would be if it had a curved display).

Samsung also notes that its smartphone displays will reach an incredbly high resolution of 2,560 by 1,440 pixels next year, which will make for a density of 550 pixels per inch. That’s a big leap over the 1,920 by 1,080 resolution displays most new smartphones sport, but it’s also an unnecessary upgrade since no human will ever be able to see the difference.

In a surprising admission, Samsung’s executives didn’t shy away from the fact that the company’s software efforts run far behind its hardware. Samsung said that it will spend half of its R&D budget (which totals around $3 billion a quarter) to focus on improving its software chops.