The ambitious Herrera sent a cease-and-desist letter to MonkeyParking chief executive Paolo Dobrowolny this week, demanding that the mobile startup, which is based in Rome, discontinue its app that auctions parking spaces to the highest bidder. The letter was also copied to Apple, which offers the app in its App Store.

MonkeyParking, which currently operates in Rome and San Francisco, allows people leaving a public parking space to auction it off to nearby drivers looking to park.

Two other apps made by Sweetch and ParkModo also received the letter. In a seemingly weird bid to make money, ParkModo was offering drivers on Craigslist $13 an hour to reserve public parking spots in the city’s Mission neighborhood.

Herrera said if the apps don’t disappear, their developers face fines of up to $2,500 for each transaction that occurs through the apps.

In a press release, the exasperated Herrera put it this way:

That’s right. The apps cause people to “engage in online bidding wars” while behind the wheel of their ride! 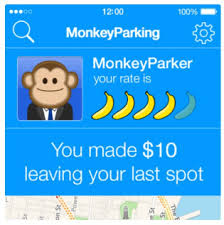 Above: The Parking Monkey app

Currently, San Francisco has a love-hate relationship with the tech companies that have set up shop in the city, beginning, really, in the late 1990s, during the first bubble. It’s the age-old dilemma that while the city derives much-needed revenue through taxes on the IT outfits, the tech companies drive up rent and prices for goods like gas and bread.

Herrera, in his letter, added:

“People are free to rent out their own private driveways and garage spaces should they choose to do so. But we will not abide businesses that hold hostage on-street public parking spots for their own private profit.”

Herrera claims MonkeyParking is based on the facilitation of illegal transactions. He vowed to enforce the stiff fines as warranted under the Golden State’s rigorous Unfair Competition Law. Indeed, Herrera threatened that if the apps weren’t pulled by July 11, the companies would face the full brunt of a city lawsuit.

Herrera could not be reached for comment. Neither could his spokesman.

As for MonkeyParking’s Dobrowolny, he did not respond to an email asking him for comment.

As MonkeyParking says on its site: “Anyone can be a MonkeyParker: just download MonkeyParking, set your parking spot, and start receiving bid for it!”

Anybody want a banana?