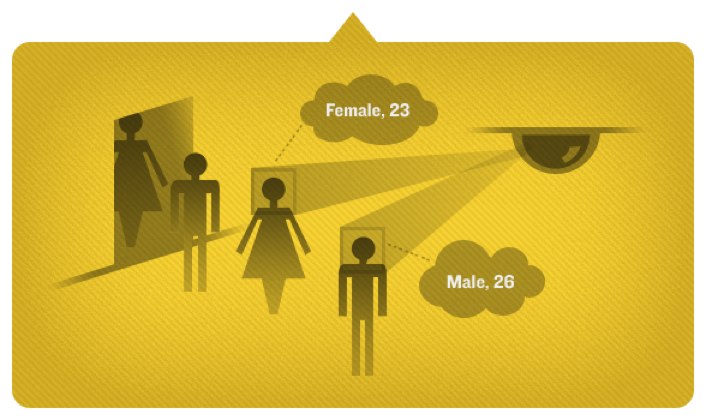 Imagine this. You and your girlfriend walk into a neighborhood bar, order a cocktail, and, unbeknownst to you both, a camera above is scanning your faces to determine your age and gender. Your deets are combined with data on other bar patrons and then spit out to looky-loo mobile application users trolling for a good-time venue with the right genetic make-up.

This isn’t make believe, folks. Rather, it’s a very real scenario that you may have already experienced thanks to a Chicago-based startup called SceneTap, which will go live in San Francisco at 25 bars on May 18.

SceneTap is a maker of cameras that pick up on facial characteristics to determine a person’s approximate age and gender. The company works with venues to install these cameras and track customers. It also makes web and mobile applications that allow random observers to find out, in real-time, the male-to-female ratio, crowd size, and average age of a bar’s patrons. And no one goes unnoticed. “We represent EVERYONE in the venue,” SceneTap proudly proclaims on its website.

Launched in Chicago last July, SceneTap is live in seven markets, including San Francisco and Austin, and has tracked more than 8.5 million people at 400 partner venues. Bamboo Hut, Bar None, milk bar, The Abassador, Fluid Ultra Lounge and 20 other San Francisco locations will have the i-spy cameras in place.

The technology walks the thin line between creepy and fascinating. SceneTap promises that all data is collected anonymously and that nothing is recorded or stored. For nightlife-lovers, it’s a fail-proof way to get a preview of a bar or club. Venues can offer specials, and are given tools to gauge the effectiveness of their campaigns. Did that happy hour margie discount, for instance, bring in more ladies?

Okay so, some may think, no big deal. What’s the harm in a little anonymous profiling? In fact, the company said it’s already fast-approaching 100,000 users (we’d like to know the demographic breakdown of those people).

But others may find it disconcerting, sketchy, and perfect for the opportunist. Do we really want the bad eggs of the world to know when a bar or restaurant is overpopulated with young women? My colleague Jolie O’Dell likened it to creepster application Girls Around Me, recently calling SceneTap, “an absolute sewer of an application.”

What’s most troubling about SceneTap, at least to this social media enthusiast who often overexposes herself by way of public Foursquare check-ins and tweets, is that the consumer has no say in the matter. Walk into one of these bars and you’re being digitally sized up — and there’s nothing you can do about it. And who’s to say SceneTap won’t start collecting other traits such as height, weight, ethnicity, or wealth?

We do know that SceneTap hopes to put its facial detection cameras to work in other markets. The startup already has its eyes on the retail sector. Let’s just hope the cameras don’t find their way into dressing rooms.

SceneTap is seed funded and has 17 employees. The startup said it’s in the process of raising a Series A round of financing.