Scottish startup eeGeo has raised $5 million from a range of investors, including NetSol Technologies, as it looks to continue growing its 3D mapping platform globally.

Founded in 2010, eeGeo is setting out to revolutionize the digital mapping realm with a 3D representation of the world that’s geospatially accurate and includes detail down to the level of buildings — including interiors. While the company offers up a number of mobile apps to help demonstrate how 3D maps can improve virtual navigation of cities such as London and New York, eeGeo’s cross-platform software development kit (SDK) gives any company access to its maps, similar to how the likes of Google, OpenStreetMap, Here, and TomTom let third parties use their respective mapping smarts.

Though eeGeo only officially launched last year, it has already worked with a number of big-name clients, including Cisco, which tapped eeGeo to create a mobile app that guides visitors through its Customer Experience Centers (CXC) using interior maps. 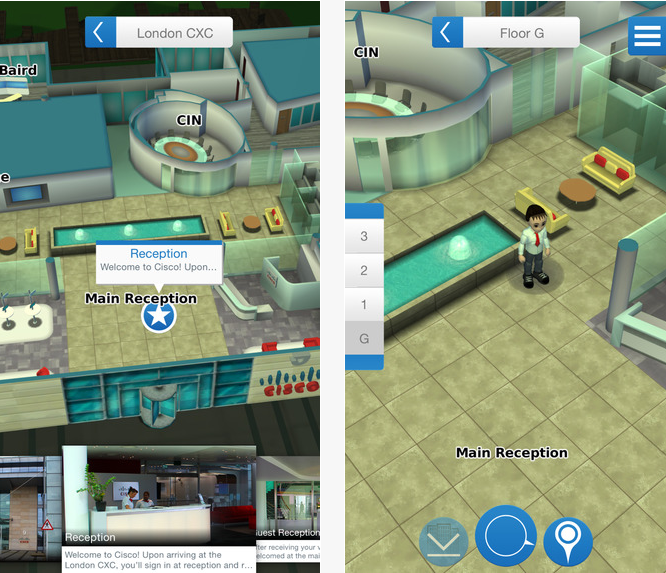 Using the app, anyone visiting Cisco can see where they are in the building in real time and navigate to where they need to be, whether that’s the reception desk, restroom, or any other point of interest. Elsewhere, Samsung also turned to the startup to create immersive city-guide apps for the 2014 FIFA World Cup in Brazil.

Scottish tech companies have experienced mixed fortunes in recent times. Edinburgh-based flight search engine Skyscanner recently raised $192 million, reportedly raising it to the much-coveted “unicorn” status and making it one of Britain’s most valuable companies in the process. Elsewhere, fantasy sports site FanDuel — which was also founded out of Edinburgh but operates entirely in North America — is currently facing a number of legal entanglements in the States that are threatening its very existence.

As for eeGeo, it counts a 25-strong team based at its headquarters in Dundee, Scotland’s fourth largest city, on the east of the country. But it has expanded beyond Scotland and now counts staff in London and San Francisco too.

Company CEO Ian Hetherington has an impressive background in the gaming realm, as he played a pivotal part in the early years of Lemmings, Grand Theft Auto, and Sony PlayStation. Hetherington cofounded a company called Psygnosis back in 1984, which he later sold to Sony — this was to be the genesis for the launch of the now-famous games console. In a funny coincidence, VentureBeat recently covered a fledgling startup from Hetherington’s Psygnosis cofounder Jonathan Ellis — but Yubl is an entirely different proposition than eeGeo.

Though the $5 million cash influx isn’t eeGeo’s first outside funding, it is the first that it’s choosing to publicly announce — and it will be used to expedite development of its 3D mapping platform, extend its coverage around the world, and “build a range of market-specific products that customers can personalise,” the company said.

“Following the official company launch in 2015, we have seen an increase in customers and partners wanting to implement our mapping technology as part of their business offerings, in order to better engage with their end-users, maximise efficiency and create additional revenue streams,” said Hetherington. “This strategic funding will put us in a position to serve a much larger market, whilst delivering new features and making our solution widely available.”