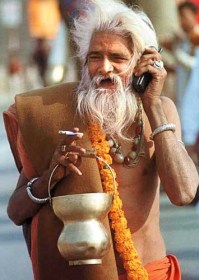 As part of Google’s ongoing battle to conquer the mobile advertising market, the company commissioned research from Ipsos OTX to understand how smartphones are used in people’s daily lives. Mobile ad network InMobi also just released some data on consumer’s attitudes to mobile shopping. Let’s see what they found.

Google’s research was conducted at the end of 2010 among 5,000 US adults. The first surprise is that the most common location to use a smartphone was actually at home (93 percent). 72 percent of smartphone users use their phones while consuming other media, with one-third using it while watching TV.

Smartphone users seem to be a very action-oriented group. Google’s results showed that 90 percent act on the information they find in a mobile search, with half making a purchase. This is particularly true with local searches where 88 percent of information seekers take action like calling a business or making a purchase within a day.

InMobi’s survey of 2,500 cell phone users found that while half of them still prefer to hit the stores (49 percent), over a third are now comfortable with shopping on their phone, and only 16 percent prefer to shop from their PC or laptop. 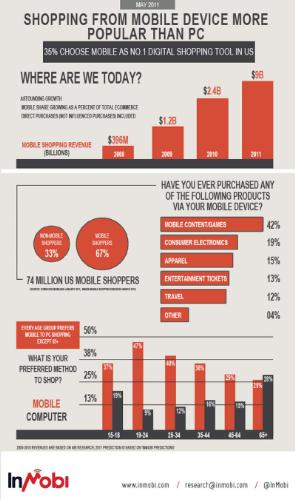 A sizeable 74 million US citizens, almost one in four, currently shop on their phones. ABI research estimates that the mobile shopping market doubled in revenue from $1.2 billion in 2009 to $2.4 billion in 2010 in the US alone. InMobi predicts growth will skyrocket to $9 billion over the next year.

Unsurprisingly, by far the most common purchases are mobile content and games (42 percent) with consumer electronics and clothing trailing far behind at 19 and 17 percent respectively.

Google concluded that mobile ads are actually reaching smartphone users. 71 percent search for information because of an ad they saw, online or offline; 82 percent notice mobile ads; and over half take some kind of action after noticing the ad, from visiting a website to making a purchase. This is much higher than the reaction rate to most online advertising.