Shazam is the latest tech company to embrace iMessage, as the music-recognition service arrives in Apple’s newest App Store. 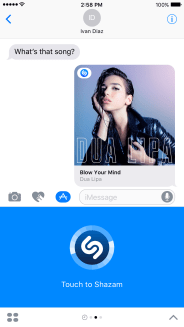 Above: Shazam for iMessage

Shazam is known for its app that lets you identify songs playing in the background, and the company recently announced one billion app downloads across the board and revealed that it is now profitable. Last week, Shazam followed another emerging trend by launching a new “Lite” version of its Android app, aimed at those in emerging markets.

Now, with the latest version of Shazam for iOS that launched last week, iMessage users can tap to detect a song directly from within iMessage. The result will appear in the “compose window,” where users can add a message before sending. The resulting message can be tapped by either party to view the artwork and see contextual data, such as how many Shazams the song has had. It also provides the opportunity to access the song in Apple Music and iTunes.