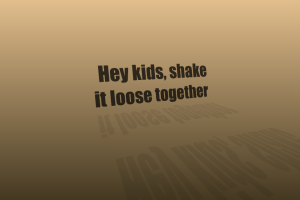 There’s nothing more perplexing than figuring out the lyrics to an Elton John song — it’s a running joke on the Internet and in television shows and commercials — but a new iOS application from one of the most recognizable startups in the music space could stop the head-scratching for good.

Shazam Player launched Wednesday in the App Store as the be-all, end-all music player for the lyrically challenged or karaoke-obsessed people of the world. The free iPad, iPhone and iPod touch application is the first separate application to be released by Shazam. The company first became famous years ago for its track-identifying technology.

The app starts by scanning your device’s music library to match your tracks against the tracks in Shazam’s LyricPlay database. The end result is list of tracks, organized by artists, albums or playlists if you wish, that you can play (and sing-a-long to) with synchronized lyric-streaming.

“We think the Shazam Player App is a great new addition and is an excellent complement to our Shazam App,” Shazam CEO Andrew Fisher said, “so that people will always have a magical musical discovery experience, whether the song is something that they’re just hearing for the first time or is a favorite in their collection.”

For a little history, not-as-cool LyricPlay features were first introduced into the standard Shazam mobile application in June 2011, following the company’s acquisition of Tunezee. The company’s lyrics library has grown from 25,000 to 30,000 songs since that time, and Shazam promises to continue adding lyrics for even more tracks over time.

The core of the new application experience centers around the streaming lyrics functionality, and Shazam Player’s interface will likely delight the listener with its colorful, animated and whimsical lyrics display. The application also presents you with a track-by-track menu called a “track tray” (click the down arrow next to each song to access it), which includes YouTube watching options, band tour dates, a lyrics sheet, and Facebook and Twitter sharing buttons.

Altogether, the Shazam Player application offers an experience that is equally as fun as it is educational — even if it is a productivity killer. In fact, to the dismay of those nearby, this reporter just spent the last 30 minutes singing along to lyrically-complex songs. Sign me up for karaoke night boys and girls, I’m ready.

In recent months, Shazam has seemed especially motivated to break away from being labeled as “that app that helps you figure out what’s playing on the radio.” It’s been busy broadening its scope to include broadcast content discovery (primarily around sponsored advertisements), raising $32 million in additional funding and working with big brands like Starbucks to further promote its mobile apps.