Song-tagging and recognition platform Shazam is the latest tech company to roll out a “lite” version of its flagship app. 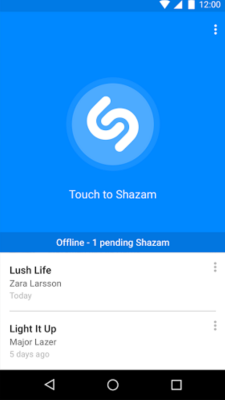 Launching today for Android users, Shazam Lite is available in only a handful of markets, including India, Indonesia, Vietnam, Venezuela, and Nigeria. Weighing in at less than 1MB, the app strives to operate on as little bandwidth as possible, serving up the basic functions of the main Shazam app.

For the uninitiated, Shazam is best known for the eponymous app that lets users identify songs playing in the background by holding their phone up to the audio, though it has branched out into other media genres, including TV. The company recently announced one billion app downloads across the board, and revealed that it was now profitable.

Its new slimmed-down app serves up offline functionality, letting users “Shazam” songs while they’re not online, though song names will only appear once a user has established a connection. It’s worth noting here that this is already a feature of the main Shazam app, but it will perhaps resonate more in markets where Wi-Fi or mobile internet is patchy.

Notably, the app lacks many of the additional social features that have become a mainstay of the company’s core app, but that’s no bad thing — Shazam Lite offers the one thing that the company is known for, and that will suffice for most people.

“We’re focused on providing Shazam in areas where connectivity is poor and available devices may be limited,” explained Iordanis Giannakakis, head of Android engineering at Shazam. “Shazam Lite was built from the ground up with listeners from these regions in mind and it aims to bring the core, ‘magic’ Shazam experience to them.”

As with many other companies in the mobile realm, Shazam is seeking growth through catering to the millions of people who either don’t have access to the latest slick smartphone, or reliable mobile internet. Just this week, Facebook introduced Messenger Lite, a smaller version of its super-popular messaging app, which followed a year after a similar lite version of the main Facebook app.

Last week, Facebook’s adversary Google went all-in on targeting those with poor internet connections as part of its mission to grab the “next billion” internet users. The internet giant announced a new “offline first” YouTube app, which will be available only in India at first, that has been rebuilt from scratch to work when connectivity either sucks or doesn’t exist. It also launched a number of new initiatives to reduce the amount of data its apps need to function properly.

Earlier this year, IronSource, an app monetization, discovery, and analytics company, tapped internal trend data to reveal that lite apps are growing across the board, including on iOS.

Moreover, lite apps are not always focused on saving data, and can often be more about offering free, stripped-down versions of “bigger” paid-for apps, with a view toward hooking people and their wallets. However, as millions more people join the smartphone brigade around the world, it is those in emerging markets who sit squarely in tech companies’ sights.

“The increase of Lite apps being developed by important players in the app industry is a clear identifier that this is a growing field with the potential to become a key factor in successfully accessing emerging markets,” said Omer Kaplan, chief marketing officer and cofounder of IronSource. “With massive populations and smartphone adoption at an all-time high, these markets represent a huge opportunity for app developers, and building Lite versions of their apps is a critical step in taking advantage of this huge potential.”