Creating a buzz around your event can be hard, even in a social media-driven world. And providing attendees with extra value is often difficult too.

Today, Shoto – the photo aggregator app — has released a major AI-powered update that focuses on solving these exact problems.

The app itself is a simple affair. Shoto was originally intended to let family and friends bring photos and videos, taken on separate devices, into a single album. This new edition takes that foundation and adds the ability for event organizers to create shareable albums that not only pull in content associated with the inevitable event hashtag — from public Twitter and Facebook posts — but also to pull together photos taken at the right time and in the right vicinity, via the Shoto app.

So how is AI helping with this process?

“We create a geofence using a supervised learning algorithm,” Sachin Dev Duggal, chief executive wizard and founder at Shoto, told me. “It looks at a number of the tags and data points around the event’s location, the density of attendees, and the graph of the people who are there, and their interlinking. This helps us narrow down the right ‘circumference’ to use.”

That’s when the AI gets to work.

“Where AI and machine learning really picks up is in the random forest/k-clustering implementation we have on the ‘album match’ feature, which shows you who has photos that you might like to ‘swap’ with using your photos as the currency to do the exchange,” Duggal said.

While that is smart, the real benefit for event organizers is in the analytics available once the content has been collected. You can see which sessions, talks, and speakers solicited the greatest number of photos and videos, and you can determine which of your attendees has the biggest reach. That helps with booking speakers for future events and understanding what content sparked an emotional reaction with the audience.

“We aim to use our dataset to give event organizers a better idea of who to invite in the future because we can correlate the number — and segments — of photo takers to what’s happening on stage,” Duggal said. “This is more than just event sharing — it is also everyday photo swapping/journaling.”

Shoto’s new events feature is aimed at creating a highlight reel from your event using photos taken by hosts, professional photographers, and guests. Organizers have full control over which crowdsourced photos should be visible, and attendees can see all the images in real time, which in turn — like many a “Twitter wall” before it — encourages guests to share more content. Additionally, Shoto lets guests order physical prints.

The real core of Shoto Events is its ability to triangulate demographic, social, and photo data so that organizers know at which moments in time their audiences were most excited, and also which demographics reacted well to certain performances or keynotes. 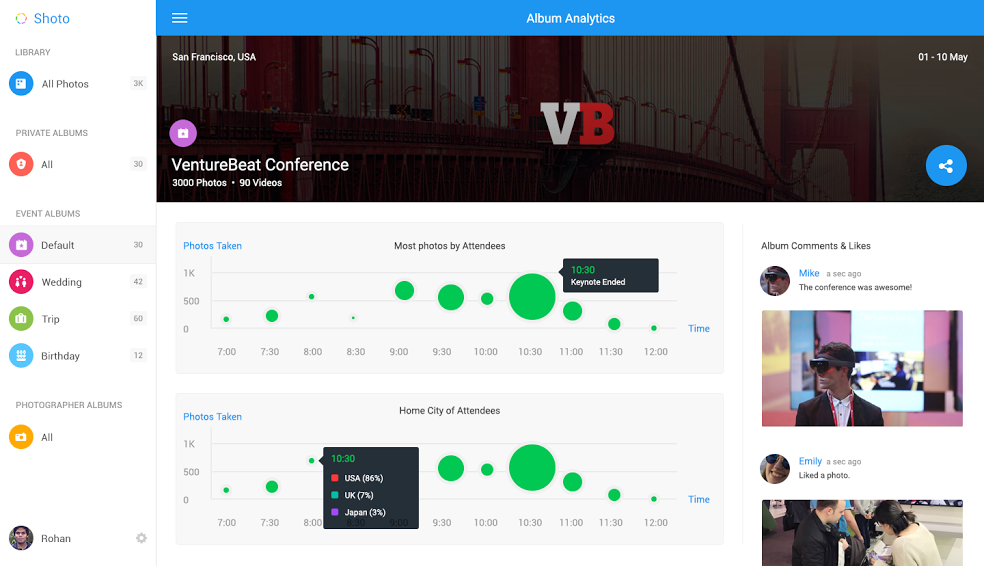 Of course, one has to be careful about how user-generated content is solicited, used, and shared. Shoto has extensive privacy controls to ensure its users understand what is shared and with whom at all times, and it doesn’t share photos or content without the user’s permission. Content coming in from public Twitter and Facebook posts, attached to the event hashtag, can be moderated by the organizer.

Does Shoto also pull in videos, and what if attendees are livestreaming from the event?

“Yes it pulls in recorded videos,” Duggal said. “Livestreaming is on the roadmap and will be coming soon, as well as highlight reels that get automatically created from your event.”

Shoto’s new events feature is available from today via its web app, iOS, and Android.