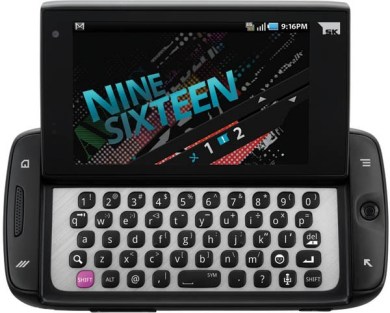 T-Mobile has finally offered up some details and images of its upcoming Android-powered Sidekick 4G smartphone — and at first glance, it appears the carrier may have another teen hit on its hands when it lands this spring.

As we reported previously, T-Mobile tapped Samsung to revive the Sidekick brand (previous models were built by Sharp). The new Sidekick won’t feature the iconic rotating screens from its predecessors — instead, it has a “pop-tilt” hinge that raises the screen up at an angle to reveal its hardware keyboard. The phone will also be the first Sidekick to sport a touchscreen (at 3.5 inches).

Clearly, T-Mobile is aiming to make the Sidekick 4G more than just a messaging phone like the original Sidekick line. It will run Android 2.2 and sport a 1 gigahertz processor. Camera-wise, it has a 3-megapixel shooter in the rear as well as a front-facing camera for video conferencing (Qik video chat is built-in). The phone will also sport a customized user interface to make it stand out from the many Android competitors on the market. Since it’s a Samsung phone, the Sidekick 4G also has access to Samsung’s Media Hub, which allows users to rent or purchase movies and TV episodes.

The phone will run on T-Mobile’s HSPA+ 4G network with theoretical speeds up to 21 megabits per second. In real-world usage those speeds will be significantly slower, but still noticeably faster than typical 3G phones.

As I wrote previously, the resurrection of the Sidekick came as a surprise. Danger, the company that created the original Sidekick, was acquired by Microsoft in 2008 — but the only fruits of that union were the failed Kin phones. (Danger called its early smartphones “Hiptops,” but T-Mobile controls the “Sidekick” trademark for smartphones.) T-Mobile has a better chance at finding success with a new Sidekick with the combination of fast 4G speeds and Android.