In the midst of Silicon Valley, the San Francisco 49ers NFL football team now have what could be the best high-tech stadium in the world.

Levi’s Stadium, located next to the Great America theme park in Santa Clara, Calif., was built in the modern era of mobile technology. It’s been called a smart stadium, and it’s full of gadgets. It took about two years to build at a cost of $1.2 billion.

The stadium has high-tech amenities like fast Wi-Fi connectivity and mobile apps that are accessible from any seat in the stadium. I’ve been to the stadium twice now, once during the San Diego Chargers preseason game, and again in a tour led by 49er and Comcast executives. The press on the tour got to see the technical guts of the stadium. 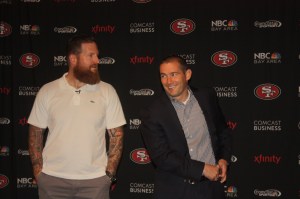 Above: Dan Williams and Al Guido of the 49ers

Al Guido, the chief operating officer of the 49ers, said the technology is aimed at enhancing the fan experience and not taking away from the “stars” on the gridiron. But during a six-hour experience, the actual playing time on the field is relatively short. And these days, it’s not an option to be unplugged from your smartphone for that long, Guido said.

“When we talk about tech, we never want to take away from the hero feature, the 11 guys down on the field,” Guido said. “Tech has to be ancillary to what is happening on the field. We didn’t want people staring at their phones and not making noise. We need a home field advantage. What we can do is build the infrastructure and tech to enhance the experience.”

I was able to watch the Chargers game from the owner’s club suite (all sponsored by tech firm Citrix) that belongs to venture capitalist Rick Thompson. He hosted 18 executives from Chinese mobile game and tech companies, as well as a bunch of local game company leaders. They weren’t all interested in watching their first football game, but everybody seemed impressed with the amenities and the tech. You could look down on the field, or at the 4K TV in the suite. There are 170 luxury suites, each able to accommodate approximately 25 guests, in the 1.85 million square feet stadium. 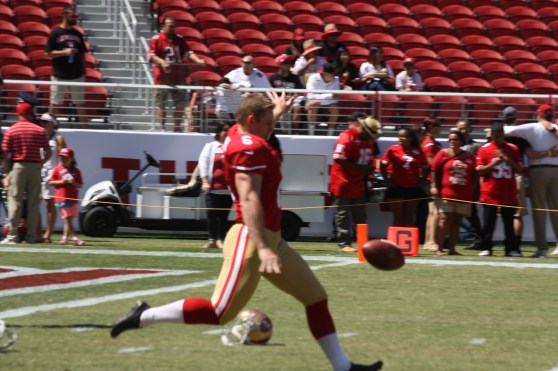 Above: A 49ers kicker warms up on the field.

Comcast has wired the place with multiple 10-gigabit Ethernet networking cables (combined into 40 gigabits per second bandwidth), bringing a total of 400 miles of fiber-optic cable into the stadium. At any given spot, you can access super-fast WiFi, thanks to 1,200 routers in the stadium (with 600 of them placed above and under the seats). I used a speed-measurement app to test the connection, and I was getting 28 megabits a second downstream and 47 megabits upstream on my iPhone 5. That is faster than what I can get at home. At another spot in the stadium, I got 40 megabits downstream.

In a recent Broncos preseason game, the stadium had 20,000 concurrrent WiFi users, with a peak data usage of over 2 gigabits a second. For three hours, the average was above 1 gigabit per second in terms of usage.

“That’s never been seen in a stadium before,” said Dan Williams, vice president of technology for Levi’s Stadium. “We still feel like we have work to do.”

Guido said that Silicon Valley companies stepped up to help. Comcast NBC Universal broadcasts the games, but is has also cut a 10-year deal to provide all of the internet connectivity for the stadium. Other major sponsors and partners are Intel, SAP, Yahoo and Brocade.

“This contributes to the fan experience,” said Comcast Business vice president Ted Girdner. “This is the most technologically advanced stadium in the world, from the moment you step in and get your ticket scanned.”

You can get your tickets without going to a Will Call window, over a PC or mobile device. You can transfer the game tickets or parking passes to your friends in a digital way, so they can print the tickets at home. Half of the season ticket holders are distributing tickets this way.

“Before this year, you had to send your parking passes to friends in the mail,” said Chris Giles, director of business operations for the 49ers, during a press tour.

SAP sponsored a bunch of the kiosks where you can take quizzes on a touchscreen, answering questions about 49ers trivia. Lots of buses and light rail trains bring fans into and out of the stadium. 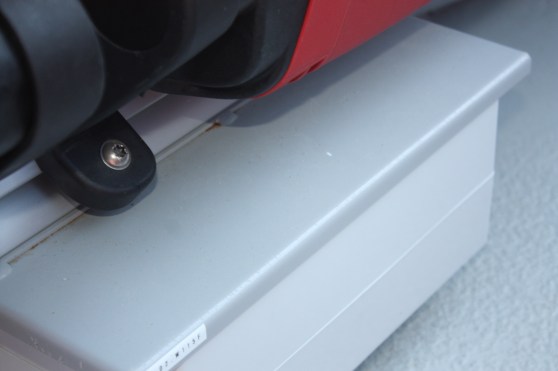 Above: WiFi boxes are under the seats.

Atop the stadium is an environmentally friendly “green roof,” the NRG Solar Terrace with 27,000 square feet of plants and solar cells.  NRG Energy has provided three pedestrian bridges with solar cells Silicon Valley’s SunPower on top of the roofs. The staff monitors the stadium’s resource use in terms of photovoltaic electricity and water usage. The bathrooms use reclaimed water in the toilets. The stadium has received the Leadership in Energy & Environmental Design (LEED) gold rating from the U.S. Green Building Council.

The stadium has huge decks of suites that look like a skyscraper laying on its side. They have amenities like free gourmet food, no lines for burgers, and visits from the dozens of cheerleaders. Owner suite customers also get passes to visit the field, where, just before the Chargers game, the caretakers were frantically replacing the grass on the field because the earlier turf took too much damage from the football players’ cleats.

The stadium is 40 miles south of San Francisco, in the heart of the traditional Silicon Valley and just a short distance away from the headquarters of Intel, the world’s largest chip maker. It replaced the aging Candlestick Park, and is just opening for fans this season.

Williams said it takes dozens of staffers to run the tech for the stadium. On a press tour, he showed us a data center inside the stadium, where there are hundreds of Intel-based servers in racks that are connected to high-speed fiber-optic cables. The data center is the transfer point for moving the data from the fans to the broader internet. If necessary, Levi’s Stadium can tap computing power in distant data centers as well.

“Selfishly, what I’ve done is build my own experience as a fan,” Williams said.

Comcast’s NBC Universal division also provides the news coverage of the sporting events. Outside the stadium, there’s an NBC booth where fans can pretend to give their own live newscasts of the events. 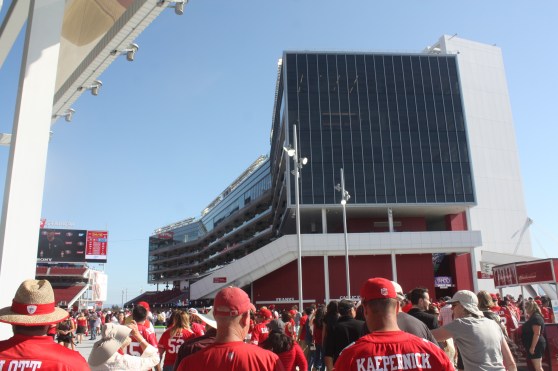 Above: The view entering the stadium.

When the stadium is filled with as many as 68,500 fans, you have to share that wireless connectivity with others. But the size of each WiFi picocell is relatively small, limited to about five rows each, with a radius of about 20 feet. Each box serves about 100 people. This means that tens of thousands of devices could be used to get on the internet in a very concentrated space. There will be gridlock in the parking lot, but the hosts don’t expect gridlock on the internet.

About two of every three smartphones log into the Wi-Fi using the 5 gigahertz band of the wireless spectrum. But a third of the phones are older models, such as the iPhone 4, and they log in using the 2.4-gigahertz band. Everyone can send their proud selfies out to friends in real-time. About 60 percent of the users are on an iPhone.

“We’re still not quite in the most technologically advanced place, for Silicon Valley,” Williams said. “We hope a lot of people will buy the iPhone 6.”

Up at the top level, on either side of the U-shape in the oval stadium, are two giant video screens from Sony. The light-emitting diode (LED) are 48 feet high and 200 feet wide, with a resolution of 4648 x 1120. The video is dubbed HD13, for the 13 millimeter-pixel pitch between the LEDs. There are 5.2 million pixels in each of the giant video boards. The aspect ratio of 20:9 isn’t quite 4K, but it’s better than most high-definition TVs at home. The imagery is sharp when you view it from the stands. And it should, as each screen cost $15 million.

Sony also provided more than 2,000 TVs around the venue. All told, there is 13,000 square feet of video space in the stadium.

Those TVs and big screens broadcast in-stadium interviews that fans can see while they’re watching the game.

“For the fans in the stands, we should deliver something that is even better than what you get at home,” Guido said. “When Patrick Willis gets everyone fired up in the huddle, why shouldn’t our fans in the stadium see that?” 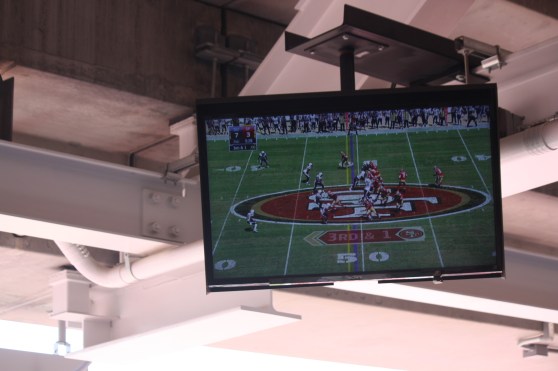 In the interactive 49ers museum, there are four motion-sensing games where you can act out some plays as if you were a player. In an augmented reality exhibit, you can step into an image alongside a video of a player.

The Levi’s Stadium mobile app lets you order hotdogs and sodas, delivered to your seat. You can tap on the screen to pick what you want from a limited menu, and you don’t have to wait in long lines. You can also order food that you can pick up at an express line at the concession stands too. This is helpful for people who want to order a lot of stuff and don’t want to wait for people who don’t know what to order, said Giles during a press tour. If you don’t pick up the express order, you don’t have to pay for it.

That makes fans feel more like VIPs in the suites.

About 80,000 people have already downloaded the app. More than 1,000 people ordered food delivered to their seats at the Chargers game, and the average delivery time was 12 minutes, said Giles. A bunch of “NiNerds,” or local tech-savvy people like Geralyn Joy, have been hired to help people use the app and other technology at the game, so that people will become more comfortable using it.

“It’s all about letting people do what they came to the stadium to do,” Giles said.

You can use the app to find the right parking lot. The app’s aids include a video that shows you the way to drive to different lots. That’s important because it can take an hour to get into or out of the lots to the nearby freeway.

“It creates an individual fan experience,” Guido said. “You can watch whatever replay you want from any angle. We didn’t want to dictate the content.” 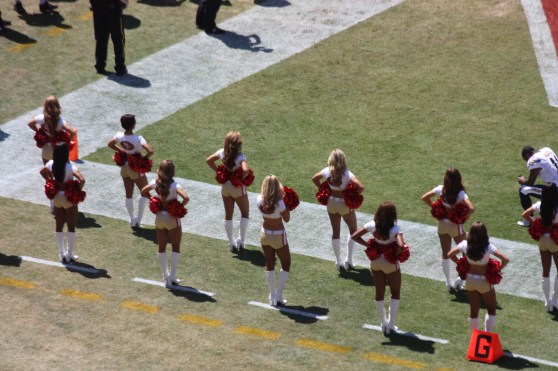 Above: The 49ers cheerleaders. You can steer the app camera to look at them if you want.

For the upcoming Chicago Bears game, you can also use the app’s Game Center to view the plays from multiple camera angles. And you can use it to find the bathroom with the shortest line. The app lets you watch the game live and access stats immediately.

The stadium has 1,700 beacons that use Bluetooth Low Energy to connect to your smartphone. Those beacons can help you find your seat, and they can send you alerts about the promotions from the nearest souvenir or snack stand.

The press room has some of the fastest internet access, and some very clear views of the action down below. They can transfer high-speed data files to newsrooms, social media, or video screens on the fly.

Comcast SportsNet Bay Area, the local TV station, has a 1,000-square-feet TV broadcast studio inside the stadium. It sends its programming over the fiber-optic cables to the internet as well.

“Everything is geared to making the core experience better,” Giles said.