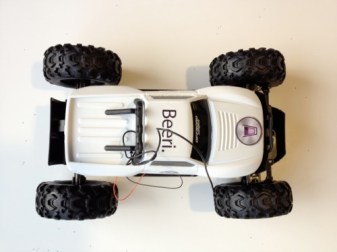 iPhone 4S voice assistant Siri can talk, find restaurants, recite closing stock prices, and might be a good listener if you’re lonely. But now it’s breaking out of her aluminosilicate glass and stainless steel mold (see: asking Siri what it’s wearing) and moving into the physical world — to pour you a beer.

When Siri arrived, Matt Reed, developer at Nashville marketing agency Redpepperland, realized it could be used for more than just virtual-world tasks. Indeed, Reed concluded the voice assistant could solve one of our favorite first-world problems: the elusive beer.

You know, that moment when your beer is in the fridge and your thighs are sadly suctioned to the hot leather couch? We’ve seen the problem tackled with dogs — the St. Bernard is often portrayed with a small keg around its neck — with robots, and other gadgets. Why should Siri be excluded?

So Reed came up with Beeri, a technology concoction of Siri, Twitter and a modified remote controlled truck. First, Reed and team created a Twitter account, @beeribot, and then created a corresponding contact in an iPhone 4S titled “Tweet Beeri.” The contact, attached to the number 40404, works the same as tweeting through text message. Next, the team modified the remote control truck with a micro-controller connected to Wi-Fi. 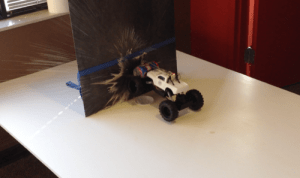 To make the truck run, Reed prompts Siri to text the “Tweet Beeri” contact with the words “Could you pour me a beer?” Siri texts the contact, which then automatically tweets the message to @beeribot. The truck, with it’s new electrical settings, scrapes @beeribot for the word “pour,” which triggers a set of commands, hurtling the truck with an attached beer can toward a spike in a wall. Yes, it’s time to impale some booze.

But Beeri isn’t the most focused with its pours.

“We started with a six-pack to test it out and maybe got one beer out of the whole six-pack,” Reed told VentureBeat in an interview. “A lot of good men lost that day.”

The truck tends to make a mess as well, but Reed chalks it up to beta testing and hopes to see less mess and more practicality in the next iteration. He’s so confident, in fact, he intends to see Beeri go commercial.

“Once people see the practicality of it… who isn’t going to want one in their bar?”

Check out a video of Beeri in action: