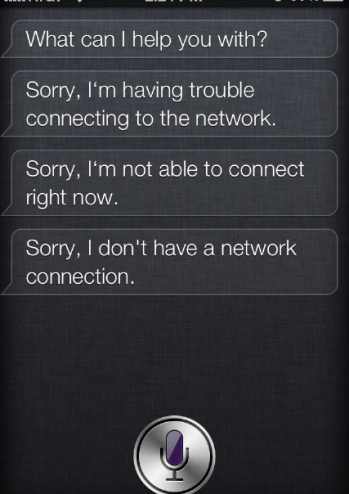 Siri, Apple’s new voice assistant feature for the iPhone 4S, is apparently suffering from an outage, which has rendered it useless for many iPhone owners. The outage began at around 11 am PST today.

Siri isn’t just a simple piece of voice control software. To function properly, Siri must communicate with one of Apple’s servers for additional information. For example, when you ask Siri what the weather is like in Nashville, Tenn., it plays an elaborate game of telephone with a main database that has the information, and then updates you with the answer.

This is precisely the reason jailbreaking the iPhone 4 and the iPad to run Siri is so difficult.

We’re contacting Apple for additional information and will update you with what we find out. In the meantime, feel free to let us know if you’re experiencing the Siri outage by leaving a comment below.

Update: We called Apple’s customer service number to find out more information. Despite toggling off the Wi-Fi and restarting the phone as they suggested, I was unable to get Siri to connect (not that I’m surprised). The Apple Care supervisor I spoke with said it’s entirely possible that it’s a network outage.

Update 2:40pm Pacific: Siri is still offline, according to our tests, and numerous other users are also reporting outages. So far, Apple has not issued an official statement, and it has not responded to our requests for comment.

Update 4:04pm Pacific: Siri functionality has been restored for some iPhone 4S users — including myself. At this point we still don’t know what was causing the outage, or how widespread it was, and Apple still hasn’t responded to our requests for comment.

Siri did respond, however. I asked her, “Siri, where you been all day?” Her response? A number of day spas and hair salons (Screenshot).

Thanks to Armen over at iSmashphone for tipping us off, and to VentureBeat’s Heather Kelly for the suggestion about asking Siri where she’s been.