Back in January, a CES panel of cellular insiders correctly predicted that 2018 would be remembered as the “road to 5G” — a year of laying the foundation for ultra-fast fifth-generation cellular devices to launch in early 2019. Hundreds of 5G announcements have followed since then, some more significant than others, and a few companies have even used 5G as a buzzword to attract attention to late-generation 4G phones.

Just like virtually every other new technology, 5G is already racking up both supporters and critics, as early excitement over 1Gbps wireless devices has since been offset by skepticism from some quarters. Will real-world speeds live up to the 5G standard’s promises? Should anyone actually buy early 5G phones or devices, when better ones will surely be just around the corner?

Though I sift through 5G announcements every day and have a pretty keen filter for nonsense, I haven’t become jaded or skeptical about the promise of this new cellular technology. Once you understand what 5G will offer — here’s a cheat sheet for that — I think you’ll agree with me. Over the next couple of years, we’re going to see some genuinely exciting innovations across phones, computers, and extended reality (VR/AR) headsets, as well as early 5G-connected cars, streets, and businesses. Just like 4G, which has kept improving every year, 5G’s innovations won’t all happen at once, but we’ll start to see some cool advancements very soon.

Here are five early 5G devices I’d suggest watching in 2019 — it’s safe to say that you’ll be hearing more about them in the near future.

1. HTC’s 5G Hub. Due to antenna engineering challenges, there’s no getting around the fact that early 5G devices are going to be larger than equivalent 4G versions. When designing their first 5G hotspots, Netgear seems to have completely thrown up its hands and Inseego is clearly trying to do its best — but regressing somewhat, because Qualcomm’s 5G modem also needs more battery room. 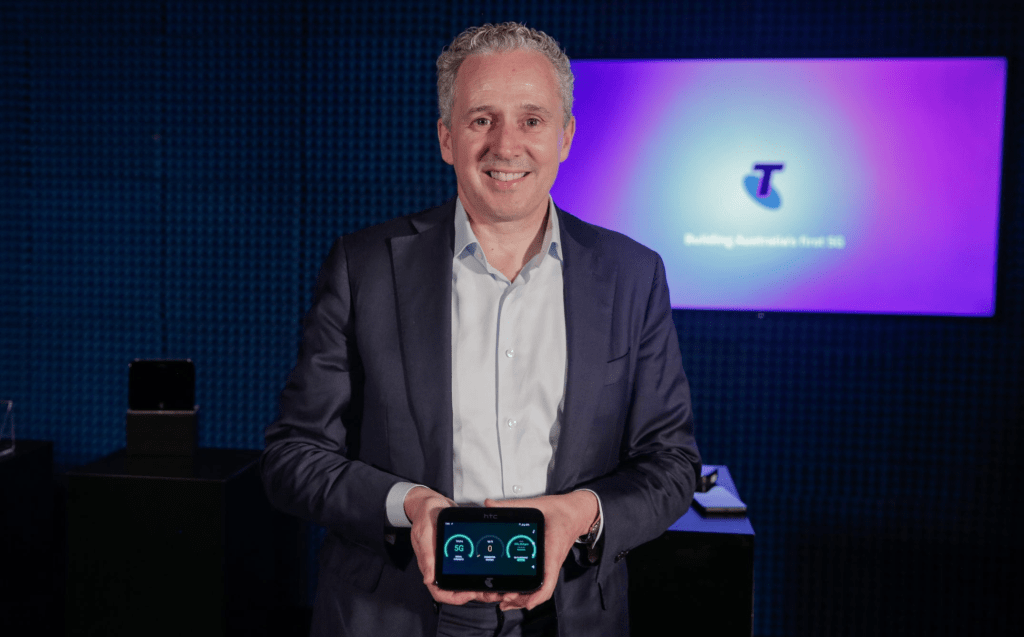 Partnering with Telstra and Sprint, HTC took a different approach, steering into the turn rather than fighting it. If an early 5G hotspot has to be bigger, why not give it a larger, more functional screen as well? Based on what’s been shown so far, the result is something that looks more like a mini tablet than a hotspot puck. If it can be used for playing multimedia, as expected, it could be worth using on its own. And as a parent, I’m excited to see how this performs as a server for my kids’ non-cellular devices in a car — it could make road trips a lot more fun.

2. Samsung’s Galaxy S10+ 5G. Samsung’s really been on a roller coaster ride lately. It hasn’t officially announced the names or specs of any 5G phones, but is known to have at least two, if not three, models in development. AT&T and Verizon have already confirmed that one of these will have millimeter wave support, and a later model will support both millimeter wave and sub-6GHz networks. Some people are rushing to declare the first phone DOA because of its limited 5G network support.

Above: A prototype Samsung 5G phone

The first 5G Samsung phone is not expected be a Galaxy S10 variant, but rather another model — perhaps something similar to the prototype shown off at the Qualcomm Snapdragon Tech Summit. For reasons unknown, Samsung is apparently planning to use Qualcomm’s 5G chips in at least one of the new phones, rather than using the Samsung-developed 5G modem revealed earlier this year.

My feeling is that the Samsung device to look out for in 2019 is the 5G version of the Galaxy S10+. Thanks to the Galaxy flagship name and marketing, the company’s reputation is really on the line whenever it puts out a new S-series phone, and if it’s going to release a 5G version of the S10+, you can be sure the company won’t cut corners on aesthetics, features, or performance. Those looking for a 2019 flagship 5G phone will most likely find it here.

But if Samsung can’t fit 5G hardware comfortably into an S10+ chassis, it could wind up shoehorning the antenna and chips into a larger Note 10. That could still appeal to some people, though I suspect Samsung won’t be able to go much bigger than the current Note chassis — and will struggle to get regular customers to pay $1,500 for foldable hybrid tablet-phones.

3. Motorola’s 5G Moto Mod. Say what you will about the idea of grafting a 5G backpack onto an existing 4G/LTE smartphone, particularly one that’s not quite flagship-caliber, but this could be a great strategy for Motorola as 5G grows through its earliest days. 5G networks are going to be hard to find, OEMs are still struggling with features, and device makers are straining to fit 5G components into awkwardly shaped hotspots. As a temporary solution, an only-as-needed 5G backpack makes sense as a way to offer both a computer/tablet hotspot and extra speed for a conventional phone. 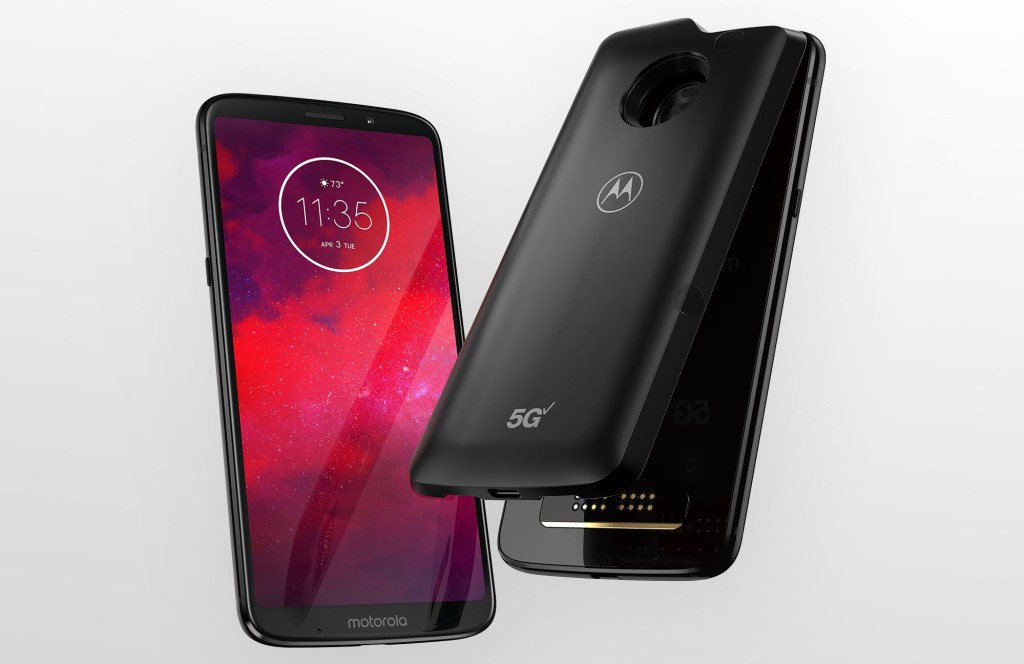 Above: Motorola’s 5G Moto Mod signals the dawn of a new era for telecommunications — 5G.

Neither Motorola nor Verizon has announced the 5G Moto Mod’s price yet, but the Moto Z3 phone it depends on retails for $480, a fair value, given its screen, build quality, and performance. If the Mod’s price is right, this could be a viable way for some users to enjoy 5G when they can find it, falling back to 4G the rest of the time.

4. Unannounced 5G VR/XR headsets. Even though Intel briefly described a WiGig adapter-equipped version of HTC’s Vive as a 5G prototype earlier this year, no company has officially announced a VR headset with integrated 5G yet. But it’s only a matter of time, and both chipmakers and carriers seem particularly excited about what will happen when 5G and VR come together. 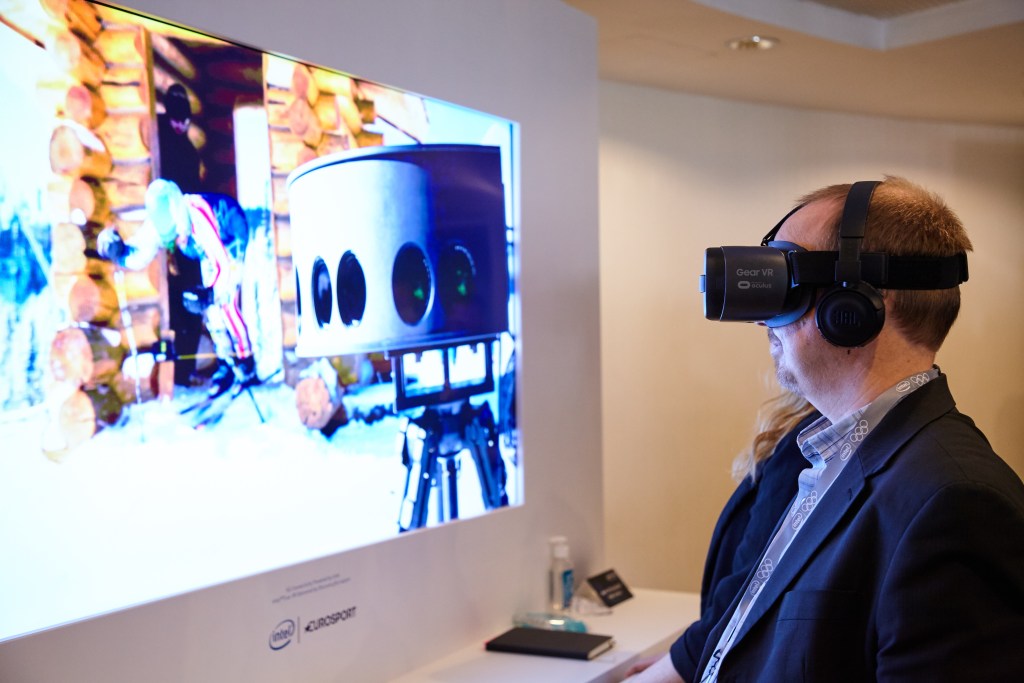 Above: At an Intel Mobile World Congress event, a VR headset wearer experiences a rendering of the downhill skiing venue at the 2018 Olympic Winter Games in PyeongChang.

The reasons are simple: If a VR headset can stream data over a high bandwidth, low latency cellular connection, it can get rid of cables, a computer, and even a power-hungry processor, dramatically cutting weight and increasing convenience. Meanwhile, users will be able to see and interact with high-definition content that’s been freed from the processing limitations of today’s hardware.

Multiple companies are already quietly working on 5G VR headsets, and Magic Leap has publicly said that it’s developing a 5G AR/XR solution that will be U.S.-exclusive to AT&T. Regardless which company is first to bring high-speed cellular technology to a VR headset, it is going to be one of the most exciting uses of 5G and will only get better over time.

5. OnePlus 5G. For 5G device developers, striking the initial balance of premium features and pricing is going to be a challenge, so there will be a lot of different answers (with some overlap) over the next year. With Samsung, we know there will be a 5G variant of the high-end Galaxy S10+, and with Motorola, a low-end 5G backpack for the Moto Z3, but OnePlus has been working on its own option all year. Because it focuses on delivering value for the dollar, it has a really good shot at coming up with something compelling in the middle. 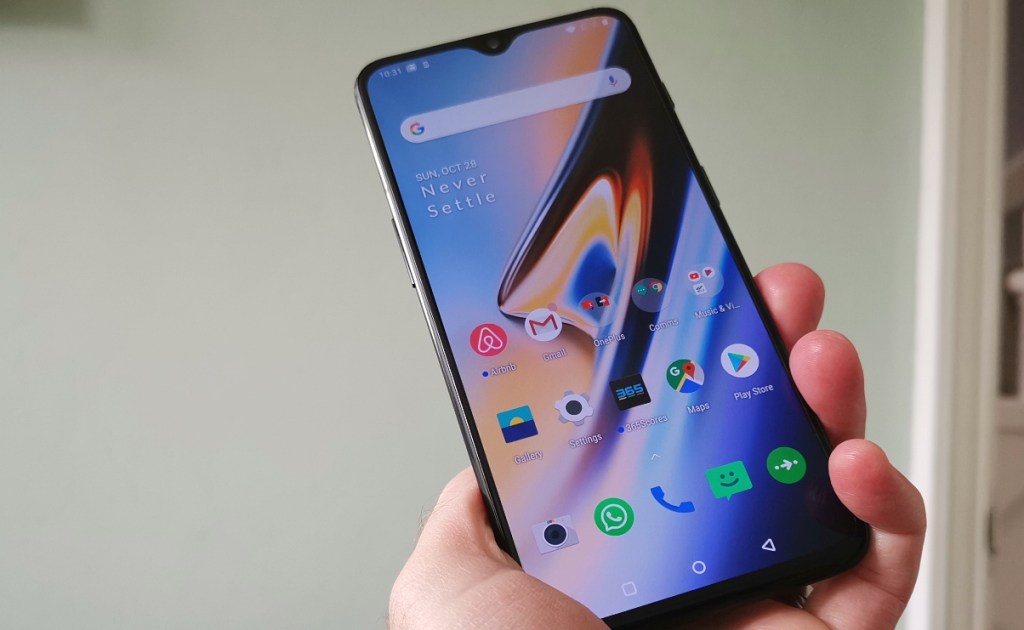 It’s probably not realistic to expect this device to be a major breakthrough compared to top 4G phones in terms of features, but we know it will have a Snapdragon 855 inside, which should deliver impressive iterations on photography, videography, gaming, and AI-assisted tasks. The real question is whether OnePlus will take a big step beyond the existing feature set of the 6T by adding something like a time of flight camera for 5G holographic calling or just be content to offer faster data on an existing phone.

Regardless, OnePlus is promising to be first with an 855-based phone and to do its best to keep the price down. That will make the 5G device very much worth watching, though its limited network compatibility probably won’t actually make it worth buying outside of the U.K.

All of the early 5G devices listed above have one thing in common: Apart from the speed benefits that will naturally come with more bandwidth and lower latency, they’re all question marks in the innovation department. Will they actually deliver transformative new user experiences or merely accelerate current uses of wireless communications technology? We’ll have to wait until next year — or perhaps the year after that — to find out.