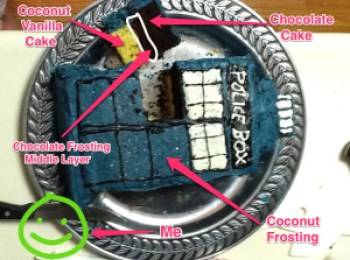 Image sketching service Skitch rolled out a new iPad app today that lets you to draw or visually annotate anything that appears on the tablet’s screen.

Skitch previously launched an Android application that coincided with the company’s sale to note taking service Evernote in August. “We built our iOS version of Skitch first for iPad because it’s the ideal form factor for tactile annotation,” Evernote VP of Marketing Andrew Sinkov wrote in a blog post.

And having spent time playing around with Skitch on my iPad (as shown in the picture of my birthday cake to the right), I have to agree with Sinkov’s statement. I can see this app quickly becoming an invaluable tool for anyone who holds lots of meetings or conducts many hands on demonstrations.

Much like the Mac OS X desktop version, the Skitch iPad app has a basic set of annotation tools, including an arrow tool, a paint brush (for scribbling/drawing), a text box tool, a shapes tool (ovals, rectangles & lines), a crop tool and a cursor tool (to move the annotated parts around the image).

There are, however, a few missing features in the iPad version that probably didn’t make sense for a touch screen interface. For instance, the app doesn’t have a tool for erasing, so you’ll have to select and delete anything you mess up on.  Also missing is the paint bucket tool, the ability to change the font style in text boxes and fewer color options.

The app gives you plenty of options when it comes to importing an image into Skitch. You can pull up photos from your iPad’s albums, snap a new picture with the iPad camera (iPad 2 only), take a screenshot of another app running in the background or just scribble on a blank canvas. You can also take screenshots of a specific web page or a custom map. Any image you’ve altered is then stored on the app’s home screen.

While there are a handful of apps similar to Skitch (like Whiteboard and Bamboo Paper), none of them can offer the full range of Evernote integration. But even if you don’t have an Evernote account, the app still offers plenty of sharing options, including the Apple TV’s mirroring feature.

Check out the demo video embedded below for a hands on look at the app.