Microsoft is officially launching Skype for Business for Mac users to everyone today, having launched in preview back in April.

The enterprise incarnation of the Microsoft-owned communications app offers a number of benefits over the normal Skype client, including full-screen sharing, one-click to join, and edge-to-edge video. Today’s launch comes six months after Skype for Business arrived for some Mac users, and 18 months after the full and final Windows version was introduced.

Also today, Microsoft announced a couple of updates to the Skype for Business apps on Android and iOS, which were debuted in August 2015. Perhaps most notably, the apps now let users present remotely with PowerPoint directly from their mobile device. Before, users would have to manually share files with other participants, which was a far less fluid way of working. 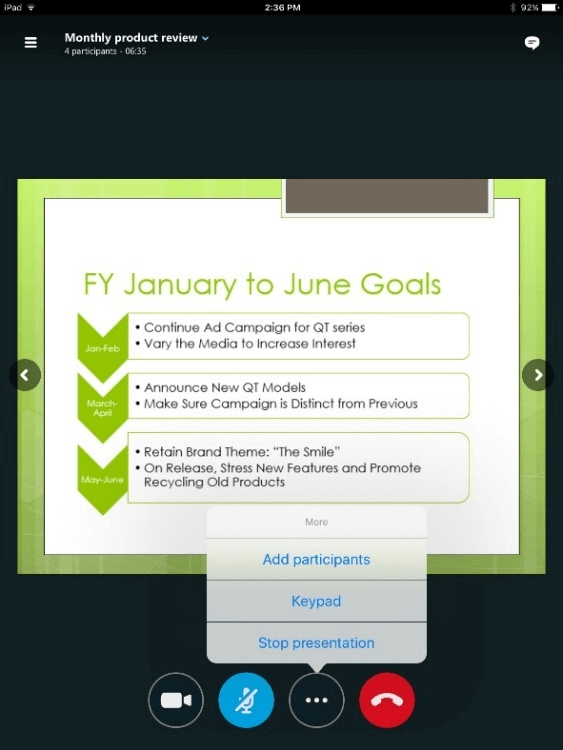 Above: Skype for Business on mobile

On both iOS and Android, users can access PowerPoint files stored in the cloud, but due to device restrictions on iPhones and iPads, only those on Android can access locally stored files.

Additionally, Microsoft has announced that Skype for Business on Android and iOS will now use Video-Based Screen Sharing (VbSS), which uses a different protocol that expedites the setup, uses less bandwidth, and generally provides a more reliable session.

Microsoft notes that it will be adding more features shortly, including CallKit integration — this is an iOS framework that serves as a bridge between VoIP apps such as Skype and the iPhone’s native calling app.