Skype has joined Google Play’s exclusive 1 billion download club, becoming one of only a handful of Android apps to reach the magic milestone.

It’s worth noting here that this figure doesn’t equate to 1 billion users on Android, given that people can download an app and never use it. Indeed, Microsoft CEO Satya Nadella revealed last March that Skype had around 300 million monthly active users (MAUs) across all platforms. And with rival services such as WhatsApp and Facebook Messenger growing in popularity, it’s unlikely Skype’s MAU number will have risen significantly. 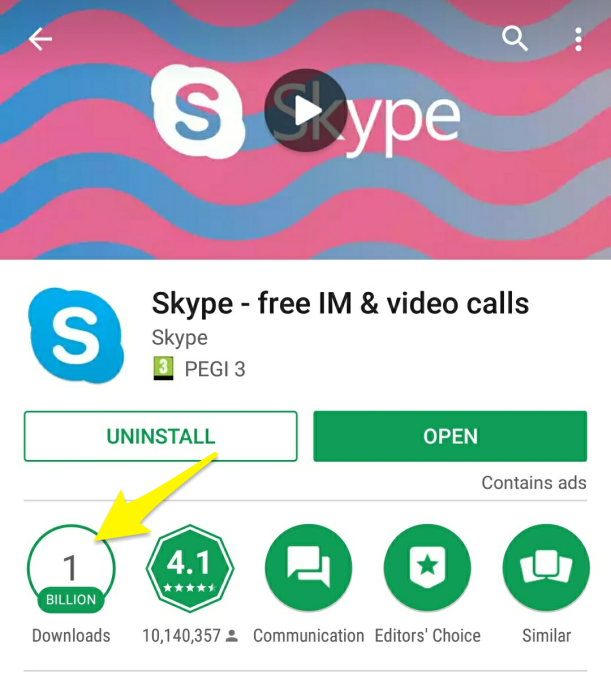 Above: Skype for Android: 1. Billion. Downloads.

Moreover, the 1 billion number relates specifically to Google Play downloads — Skype can be downloaded through other app stores, such as GetJar, so it’s difficult to garner a true picture of Skype’s popularity on Android.

Still, very few apps notch up 1 billion downloads at all, let alone on a single platform, so it’s a notable milestone for a service that helped popularize VoIP communications when it launched to the public on desktop computers way back in 2003.

Popular Google apps, including Gmail, Google Maps, and YouTube, have all long passed 1 billion downloads on Google Play, while Facebook became the first non-Google service to hit the landmark number when it passed the milestone in 2014. A year later, Facebook’s WhatsApp also notched up a billion Android downloads, followed by Facebook Messenger a few months later.

So Microsoft is effectively now the third company to boast an app with more than 1 billion downloads on Google Play.