Ushering in the biggest changes to the Skype user interface in years, the messaging app that made “to Skype” a verb for video chat is today taking a page from Snapchat’s playbook as part of a larger move to distinguish itself from competitors.

Perhaps most noteworthy among the new tools and features is Highlights, a storytelling tool that allows people to share temporary snippets of their lives, much like Instagram or Snapchat Stories. Highlights can be seen by your Skype contacts and expire seven days after publication.

Also like Snapchat, the new Skype camera is available with a simple swipe right and allows you to add expression to a photo by drawing on it or adding stickers or text.

The new version of Skype will roll out to Android users worldwide over the next month and arrive on iOS in July, according to a Skype blog post published today. A desktop version will become available this summer. 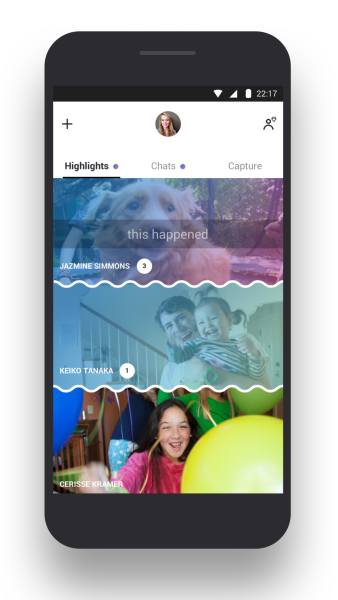 Above: Highlights tab on Skype

The new version of Skype also allows people to look at images together. In the future, Skype wants to give people the ability to play games like Minecraft in groups or watch films, videos, or even live sports together on Skype, VP Amritansh Raghav told VentureBeat in an interview at Microsoft offices in San Francisco.

“Co-browsing of photos is just a start, but it is really the concept of being able to do more in a video call,” Raghav sad.

Unlike Snapchat, the top-to-bottom change also comes with new ways to access bots and bring them into conversations.

Swipe left in any conversation and you’ll see the Find Panel, a new area for Bing web searches, local services by location, and Skype add-ins — bots that can be accessed with a graphic user interface in a webview.

New available bots include the news reader bot Scoop and a Cortana bot that can sit atop your contacts and speak with Cortana skills. The Cortana Skills Kit was made available in public preview just a few weeks ago.

Bots can also be added in 1:1 or group chat simply by typing their name, with no @mentions or slash commands necessary.

Developers can now choose between adding a conversational bot, graphical user interface bot, or Cortana, so bots can be reached with text, visuals, or voice.

“We feel like developers should be allowed [to decide, as] they know best how people want to interact with their services. We don’t want to tell them it can only be conversational or only be graphical,” Raghav said.

This way, developers can give users the option to speak with their bot either in a conversational interface or though a more traditional graphical user interface brought up with a webview.

– The abilitiy to react to messages and videos with emojis

– A new share arrow appears next to rich media, messages, and cards served up by bots so those things can be easily shared. Sharing a message from a bot brings the bot directly into a conversation so it can be called upon in a group with just a mention of its name.

– Squiggly lines inspired by sound wave now animate to visualize activity, like when you have a missed message or when a person is typing or a call is taking place.

– Color gradient themes can now be used, expanding on the previous light or dark options.

The more modern version of Skype makes its first appearance following a flurry of activity among bots and Microsoft’s Cortana.

Video bots, which also made their debut last month, could be in the Skype Bot Store this summer, Raghav said.

Microsoft Bot Framework gained the ability to publish bots to Bing so they show up in Bing search results. The ability to add Skype to a website or businesses was also added. Any chat with a local business that begins with a bot or human on a website or Bing can take place on Skype.

Skype can also be used with The Harman Kardon Invoke, Microsoft’s answer to the Amazon Echo smart speaker, as well as in connected cars with Cortana inside.