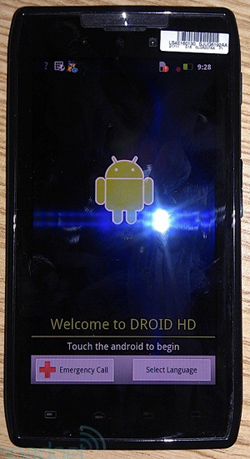 The leak comes the same week Google announced its plans to acquire Motorola Mobility — news that has shaken up the mobile industry and made many pundits wonder what this means for the Android OS. Google says Motorola Mobility will be run as a separate business from Google and that it will continue manufacturing Android phones.

Judging from the photos, the Droid HD smartphone appears to be running the Gingerbread version of Android, and it features a 4.5-inch display (with Moto’s qHD 540-by-960 pixel resolution or perhaps a 1280-by-720 resolution), an 8-megapixel rear-facing camera that takes 1080p video, and a front-facing camera. Because it looks like a very powerful device, we would also assume the phone has a 4G chipset inside.

The 4G-enabled Droid Bionic smartphone was originally supposed to launch on Verizon in the second quarter but Motorola delayed the device. The phone is rumored for a September launch, and a spec page from Motorola says the device features a Texas Instruments 1-GHz dual-core processor, 1GB of RAM, an 8-megapixel camera, and a 4.3-inch display with qHD 540 x 960 resolution.

While both devices look close to finished, Google’s bid to takeover of Motorola this week could alter when the phones are ultimately released and what their software builds look like. Google could potentially give Motorola early access to the next version of Android, Ice Cream Sandwich, or work with Motorola on better integration of Google services.

More leaked photos can viewed below: