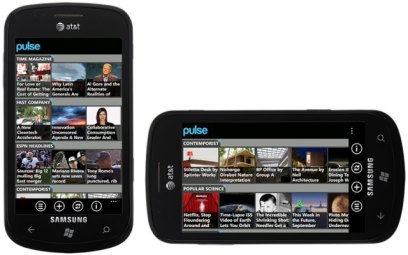 The free app will join Pulse’s family of iPhone, iPad and Android apps, bringing with it the same slick grid-based design for perusing news. The Windows Phone Pulse app will have a few features exclusive to the platform, including the ability to follow your favorite news source as a live tile on your phone’s home screen.

The company tells me that the app is expected to land in the Windows Phone Marketplace early this week.

The news reader has come a long way since its infamous debut in 2010, when the New York Times objected to the app because it felt Pulse was stealing its content. Now, publishers are eager to get on board with the app, co-founder Akshay Kothari told me during a recent trip to New York City.

That makes sense, since tablets are now a much bigger computing segment than a year ago, mostly due to the success of Apple’s iPad over the past year. And for media companies, which sometimes have trouble adjusting to new technology, it’s also much clearer what tablets have to offer consumers now.

Kothari tells me that Alphonso Labs, the company behind Pulse, is thinking hard about how to implement ads into the app. Pulse used to cost $3.99 on the iPad, which was part of the reason the NYT and other media companies took issue with it. Now, the app is freely available on all platforms, but the company is in need of a revenue stream. Kothari says he’s not in a rush to implement ads though — Alphonso Labs is more concerned with making sure that ads integrate well into Pulse’s elegant user experience.

He showed me a few prototype ads, which I can’t say much about here since they’re far from final, but which definitely adhered to Pulse’s slick aesthetic.