Slovenia doesn’t often hit the mainstream startup radar, but one company from the small south-central European nation has built up a user base of 2.5 million people since its inception in 2010.

Available on the Web, Android, and iOS, Toshl helps its users track how much money they spend and what they’re spending it on. You add incomes and expenditures, stipulate which ones are “recurring” to save you from having to manually input it each month, and Toshl serves up graphs, charts, tips, and overviews of how your budgeting is going. That’s it in a nutshell, at least.

The app first saw light in 2009, kicking around in some early Android prototypes, before the official launch on Android and iOS in 2010. It was still more of a hobby project until 2012, when company representatives traveled to San Francisco to participate in 500 Startups. They founded an official company — Toshl Inc. — in April of that year. Following half a year of living in San Francisco, the team moved back to Slovenia.

The company’s funding to date isn’t straightforward. It spun out of another company called ThirdFrameStudios, which provided an initial investment, part of which was in the form of “services.” Elsewhere, 500 Startups and a handful of other angels also plowed some cash in. Toshl estimates that it has raised around $600,000 to date.

“We’ve been making our own revenue for a while with our freemium plans, so we’re not completely dependent on outside investment,” explained Toshl CEO Matic Bitenc in an interview with VentureBeat.

On the basic Toshl service, you have some restrictions, such as you can only set two budgets and have two separate accounts. On Pro, you get unlimited accounts, budgets, and other features, such as including photos of receipts and additional export options. For this, users pay $2 a month, or $20 a year. 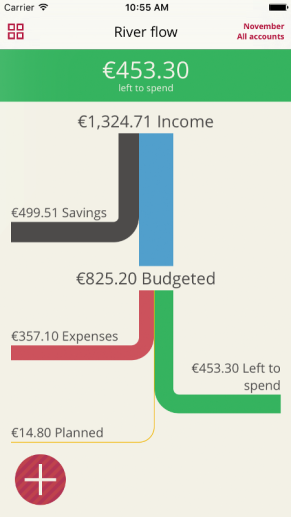 For the past year, Toshl has been working on version 2.0 of its app, which launched this week on the Web and iOS, rebuilt from the ground up, with TouchID support for fingerprint-locking, new category and tagging systems, near real-time currency conversion updates, and more. The Android upgrade will be arriving in the new year.

So what was the thinking behind the upgrade? What was wrong with the previous version?

“A while back we were considering how to improve the user experience and evolve our service,” said Bitenc. “Some ideas from our own vision, coupled with very good user feedback on our support forums. We quickly realized that we couldn’t just bolt on new features without degrading the simplicity and the user experience that our users came to expect from us.

“Multiple financial accounts are a typical example of a feature that affects everything else in the app and can’t really be done in isolation. If we just added it onto the UI back then, it would be a lot more complex, less logical, and we would have piled on technical debt.”

In other words, Toshl wanted to include new features, but “tacking” them on was the wrong way to go about it, as they may not have played nice with an app that has a legacy dating back five years. “The only logical choice for us was to do an overhaul of the entire service to make sure everything fit together well,” added Bitenc.

If there’s one thing the App Store has in abundance, it’s personal finance and budgeting apps. There’s Goodbudget, You Need a Budget, Home Budget, Visual Budget… the list goes on. Bitenc said Toshl is trying to create something beautiful and compelling, something that doesn’t emulate drab spreadsheets.

Toshl’s latest update does bring in nice visuals, but with the rise of mobile apps that integrate directly with your bank accounts, such as Mint.com and Level, as well as a slew of mobile-first banks such as the Peter Thiel-backed Number26 in Europe, the days of manually entering your spending could be numbered.

As more and more banks recognize the need to go all-in on mobile, providing real-time, automated updates on all your spending habits, apps such as Toshl could struggle to remain relevant. Bitenc is acutely aware of this. He told VentureBeat that the company will begin implementing integrations with financial institutions shortly. “One of our internal goals with the new version was also to build a solid foundation that will enable us to quickly and easily hook up different data flows,” he said.

But he also thinks that manual entry still has a part to play. “Some people prefer it because it gives them more sense of control and is a way for them to become more mindful of their spending.”

With many banks still not supporting data importing or aggregation, it could mean that services such as Toshl will only be able to offer some services to customers depending on where they live in the world. But ultimately, Toshl wants to offer both manual and automatic options in the future.

On the surface, Toshl’s latest launch seemed to be little more than a visual spit-shine. But digging down reveals a deeper plan to reinvent itself for the modern banking era.