The mobile web is looking a bit smarter lately. AdMob, a mobile ad platform we’ve covered before, put out its metrics for August, and it’s clear that smartphones are quickly becoming mainstream. Drawing on data from the over 5,000 mobile websites the company serves, the numbers point towards smartphones both in the US and worldwide continuing to become more prevalent, but with very different manufacturers dominating internationally versus domestically. 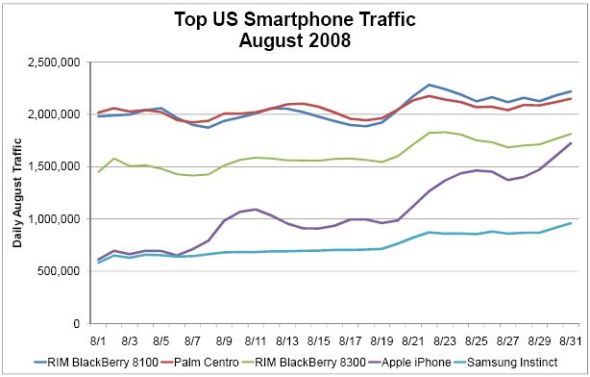 Within the US, smartphones accounted for 23.7 percent of mobile web traffic, up by 3.4 percent from May. While Apple’s iPhone has, unsurprisingly, seen dramatic growth from in the past month, jumping from 5.2 to 7.8 percent of total smartphone traffic, RIM still dominates the market, with 31.2 percent. Still, the iPhone is the fastest growing smartphone within in the US.

Worldwide, smartphones were the source of 25.8 percent of traffic, rising 3.4 percent since May 2008. Outside the US it’s a completely different market, with Nokia absolutely dominating. In every market AdMob studied, Nokia handsets were used for at least 50 percent of total smartphone requests. In total, Nokia has 62 percent of total worldwide traffic — and this is without having a single phone in the top twenty within the US. This is largely because Nokia has had trouble working with US carriers, and chosen instead to focus its efforts on international markets.

With the upcoming debut of Google’s Android, the roll-out of RIM’s Blackberry Bold, and Nokia launching its N96, as well as the continuing consumer fascination with all things iPhone, smartphones will continue to grow in market share.

Still, there’s a significant uphill before smartphones are even close to ubiquitous. The top handset model both worldwide in the US? Motorola’s once chic, now antique RAZR. 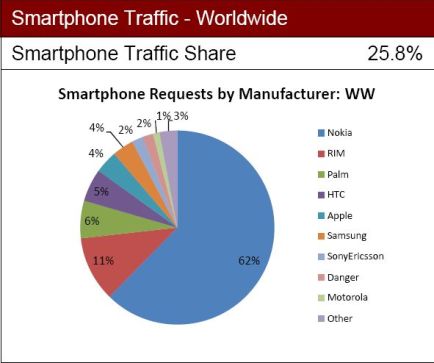