Today only 60 million people use augmented reality apps on a regular basis. By 2018, that should hit 200 million, according to a new report by Juniper Research.

More importantly, perhaps, AR will expand beyond its navigation and gaming ghettos and become a part of everyday life.

“Initial innovations will stem from games, such as Google Ingress, but the technology will expand to include lifestyle and fitness apps,” Juniper says, adding that there is the possibility of a “paradigm shifting utilisation of AR within social media, potentially breaking the digital-physical wall with potential future uses allowing a digital representation of a person to appear in the users surroundings.” 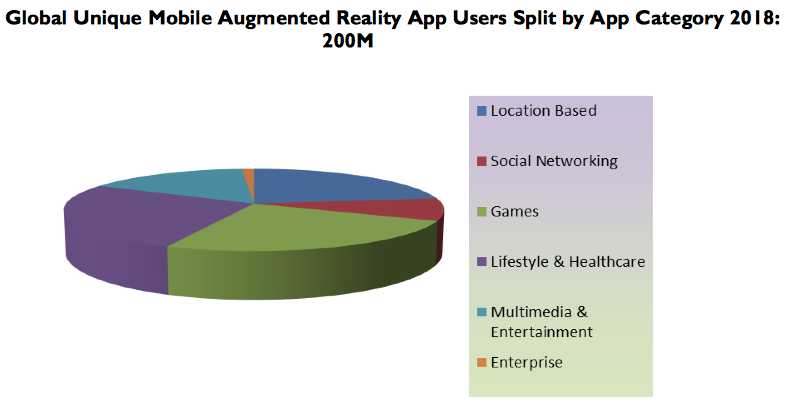 By 2018, location-based augmented reality and games will account for less than half of the AR market, according to Juniper, as lifestyle and healthcare uses such as remote doctors’ visits and remote shopping grow, as do social networking capabilities. Even enterprise enters the picture, as aircraft mechanics see technical specifications and drawings will work on machinery, and engineers use augmented reality to design and build new technology — much as Elon Musk and SpaceX are already doing when designing new rocket components.

Most AR apps, such as Layar, which can overlay content in paper media with video and other data, are ad-funded. Some are freemium, Juniper says, and a few are pay-per-download.

Interestingly, Juniper sees Android’s growing dominance as a good thing for the AR industry, which is currently fragmented and buggy.

“Another issue is the wide array of devices on the market and the difficulty in optimising a solution for all available models and operating system combinations. This means that many apps crash or offer a poor experience, failing to detect images and leading to end user frustration,” the report reads. “However … the increasingly dominant position of Android may give app developers a more standardised platform to work from.”

And, possibly, take AR out of the death zone of QR codes and into the realm of something that is ordinary, easy, and useful.