If you ever wanted to express your musical talent, now’s your chance. Smule, the maker of music apps, is releasing a new feature for its music social network that will enable people to upload open-microphone karaoke songs from the web and share them with friends.

Smule launched its Smule Nation music social network in October for fans of its music apps like Sing! Karaoke. Smule has a community of 125 million people who have downloaded its apps, and now it is trying to capitalize on those folk by creating a persistent music social network for them. That network is based on the Web and goes beyond what people can do in their apps.

Jeannie Yang, the chief product and design officer at Smule, said in an interview with VentureBeat that the Smule Open Mic feature will record your singing (without the karaoke background music track) a capella or with your own soundtrack. You can record these sessions anywhere and upload them to the web-based social network. Then others can take your creation and add their own music or voices, remix the song, and create something new.

“People can upload their original performances through mobile or the Web,” Yang said. “They can discover new songs and discover new artists.”

VIP users of the Sing! Karaoke app can upload any .mp3 or .m4a files to Smule.com. Others can turn it into a duet or group song. You can share via Facebook or Twitter. Since the launch of Sing! Karaoke 18 months ago, people have uploaded more than 23 million performances. And that is just one of the apps that they can use to upload their music to Smule Nation.

“Our goal has been to showcase our community’s content,” Yang said. “We’re growing as people get used to sharing. We wanted to open this up even more.”

And as of last week, people can also embed their creations on any website, not just on the Smule Nation network. They can embed their song videos using the Smule Player.

Yang said that the new feature is one of many that Smule plans to introduce to the network, which has had more than 1.58 million unique page views a month for performers as of February. And people are uploading a terabyte of data every other day.

One of the popular features is “auto rap,” where users can record a segment and battle someone else. Once the rap battle is over, Smule can piece it into a performance that everyone can see.

Here’s a couple of Smule Open Mic performances that Yang loves: a quartet with strings and other instruments, and a duet with guitar and vocals. 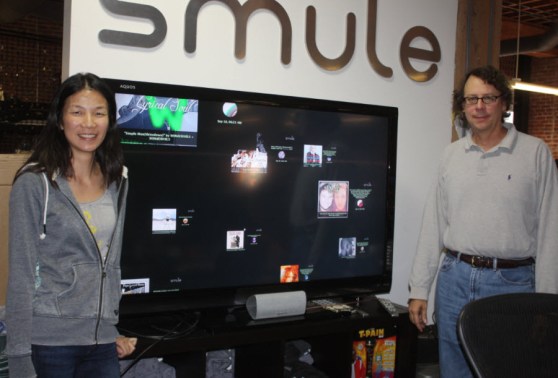