With Snapchat, you can send self-deleting photos and videos to your friends.

Using Younity’s share feature, which Younity app maker Entangled Media introduced today, you share music, videos, photos, and other kinds of files with other Younity users. But they can’t ever download those items — and you can decide to “unshare” the content at any time. Otherwise, files you share will automatically expire after seven days, avoiding some of the legal issues around sharing copyrighted content.

“It’s the equivalent of me playing a CD in your car,” explained Erik Caso, Entangled Media CEO and cofounder, in an interview with VentureBeat. “You can listen to a song, but you can’t download it. You can only go buy it, and I can unshare it at any time.”

Between the popularity of Snapchat and other messaging apps like WhatsApp, private media sharing is a hot sector these days — especially this week. This morning, Instagram debuted Instagram Direct for private photo, video, and text messaging. And on Wednesday, Twitter revamped its “direct messaging” feature, adding photo capabilities and increasing its visibility.

But Younity is no Snapchat clone. Its sharing feature is only a small part of the overall service, which Entangled Media bills as a “personal cloud.” 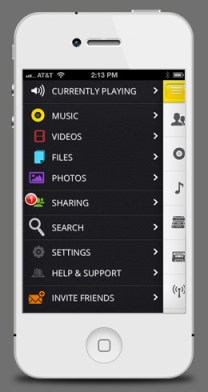 The company doesn’t store any of your data; instead, its software for Windows, Mac, and iOS indexes all of your files so you can access them on any of your devices.

In that way, it resembles BitTorrent Sync, which syncs files between your computers and mobile devices. But it also integrates with cloud storage services like Dropbox, Google Drive, and Microsoft SkyDrive, serving as a sort of meta-cloud without actually storing a byte of data itself.

“Go use Windows, go use Mac, go use Dropbox or Google Drive — we don’t care,” said Caso. “We want to tie it all together.”

Younity is available now as an early beta, but the long-term vision is to link up all of your cloud services and devices — from your Android phone to your Xbox — so you never have to worry about where your files reside.

“This means you can stop thinking about which device to use, and only think about the screen that is most convenient,” he said.

Younity not only recognizes basic files attributes including file name, type, size, and date, but also metadata like ID3 tags in audio and video and EXIF data from photos. It also grabs attributes and metadata from applications like iTunes to include playlists or other application-based organization. That means Younity can not only search across all your content as once, but also search by different types of metadata — for example, photos shot in Hawaii on a Canon S120 camera, or music released in 2013.

And none of this is accessible by Entangled, so if the National Security Agency busts down the company’s door and demands its data, the most it’ll get is some email addresses, said Caso.

For now, Younity is completely free, but the company will adopt a freemium model early next year. As Entangled expands its list of Younity-compatible devices and services, it’ll start to charge for additional implementations. It’ll let you hook up two or three for free, but beyond that, you’ll have to pay.

Not that it’ll cost that much; Caso is thinking $20 or $30 annually, which is far cheaper than cloud storage services like Dropbox. After all, Entangled doesn’t have to store anything itself, so its operational overhead is really low.

“Really, what we’re showing now is a proof of concept,” said Caso. “We want to show what the personal cloud is as an alternative to the public cloud.

“A lot of people describe this as what everyone wanted iCloud to be.” (Younity isn’t compatible with iCloud, by the way.)

Founded in late 2011, Entangled Media is split between Boulder, Colo., and Santa Monica, Calif. It currently has nine full-time employees, most of whom are engineers. The company raised a $2.25 millon funding round this August from Crosslink Capital, Draper Associates, PROfounders Capital, and others, putting its total funding around $3.5 million.