The Sochat messenger app uses Bluetooth to quickly connect with people it recognizes in the the vicinity of the user’s phone.

Sochat founder and CEO Lukens Orthwein said the app acts like a beacon and can connect with other Sochat users within 100 feet in indoor use (up to 250 feet in larger open spaces).

This removes a key barrier to easy connections, and phone numbers are kept private. Connecting via Bluetooth also means that no cellular or Wi-Fi connection is needed. If the user does have Internet access, they have more ways of searching for other users. They can, for instance, use phone number matching, real name search, or username search.

“The way it works is simple: walk into a room, pull out Sochat, and see a list of pictures and first names for everybody else there with you,” Sochat founder and CEO Lukens Orthwein said.

Sochat users typically display a public profile for other users to see. This includes first name and last name initial, a profile picture, and some bio information. 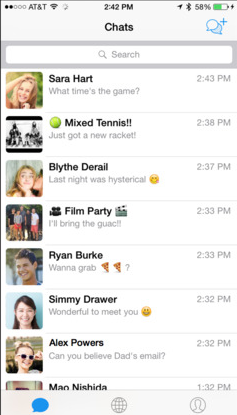 When the app encounters another Sochat user, it remembers the time and location of the encounter. The user can then look back to who they’ve met, and decide to send them a message or a contact request. If the other person wants to chat too, the two will be connected from then on.

Sochat users can chat over Bluetooth (think chatting on an airplane with other passengers) or over a Wi-Fi or cellular data connection. Users can also hide themselves from other users by flipping on the Off the Radar mode, rendering them invisible and undetectable via Bluetooth.

On the strength of the concept, San Francisco-based Sochat has pulled in a $2 million seed round, led by Eniac Ventures. Importantly, low-profile Chinese Internet pioneer and WeChat creator Allen Zhang has been working with Sochat, and has invested in the company. Also participating in the round were New Enterprise Associates, Greylock Partners, Slow Ventures, Foundation Capital, Betaworks, Maiden Lane, and Steven Sinofsky of Andreessen Horowitz.

Orthwein worked for years in China at WeChat, and started a growth group within the company that helped turn on millions of new users to the now-uber-popular messenger. WeChat now has 600 million users, mostly in China. So Orthwein knows a bit about growing a messenger product.

The app’s feature set is clearly targeted at younger users: It lets users send Snapchat-like self-destructing messages, for example, and keeps users’ phone numbers hidden. Users can select GIF images from a large library to use in their messages.

Sochat is aiming its messenger at the U.S. market, Orthwein said. More specifically, it’s focusing its efforts on promoting the app to schools and universities, to enable student networks. A large number of Harvard students are already using the app. Orthwein said the app is perfect for small, tight-knit communities. He added that message volume at Harvard and other Boston colleges and high schools has been growing 40 percent each week for the past seven weeks since school started.

He said that most of the activity on Sochat today is in group chats. Users can quickly create student study groups, or groups for sports teams and clubs, for example. Sochat uses “Bluetooth Low Energy” (BLE) technology so that the messenger app can remain ready to detect other users, yet not drain the phone’s battery.

“Instant, responsive messaging right to your pocket is the clear future of communication, and Bluetooth connections are one of the ways Sochat makes it a lot easier to chat with a lot more people,” Orthwein said.

“Exchanging phone numbers is a ridiculously outdated approach,” he added.

The Sochat app is free and is available for iOS and Android.