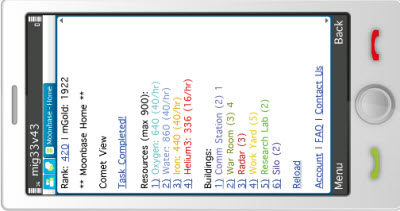 Mobile social networking service Mig33 has raised $8.9 million in a third round of funding.

Indonesian telecom entrepreneur Pak Sugiono Wiyono Sugialam and Japan’s Gree led the round. Sugiono is a well-known regional entrepreneur with ties to telecom retailers with lots of outlets in Indonesia. Gree, meanwhile, is a mobile social game portal and game developer with a market value of $2.5 billion. The choice of investors makes sense because Mig33 moved from Silicon Valley to Singapore as part of a plan to bring its service to developing parts of Asia.

The company will use the money to expand its growth as a social entertainment service on mobile phones. Mig33 is making a big bet that such services will be popular not only on smartphones such as the iPhone, but also on old-fashioned feature phones that are selling by the tens of millions in Asia, Africa, Eastern Europe and other developing regions. In these “mobile first” markets, users are buying cell phones as their primary computing devices. So they use them not only for calls, but also for a variety of services, including social networking, entertainment and games. Mig33 is riding on that trend, Sugiono said.

The company has more than 40 million registered users for its service, which started out as a way to make inexpensive voice-over-the-internet-protocol (VOIP) calls over cell phones. Now it has evolved into a social networking service where users chat with friends and send virtual gifts to each other or play games.

While the cell phone market has been driven by the sale of hardware, Sugiono believes that services will come to the forefront soon. That’s why it makes sense to invest in a services company such as Mig33, he said.

Last week, Mig33 launched a game developer program to attract more cell phone games to its platform. Mei Lin Ng, co-founder and vice president of marketing at Mig33, said in an interview that users in the emerging markets where Mig33 is strong are already enthusiastically playing games. To boost the activity, the company is creating a formal platform so that users can play each other in multiplayer games, pursue challenges in games, and view leaderboards.

Throughout 2010, Mig33 has been making a big push to create social entertainment on its mobile platform, which comes with a payment platform. The company has launched more than 1,000 virtual goods, items for avatars (virtual characters), and games. The members of Mig33’s network currently buy about 4 million virtual gifts per month and exchange nearly 1 billion Mig33 messages every day. Mig33’s competitors include China’s Tencent, which operates the huge QQ social chat network, and Japan’s DeNA, a mobile social gaming company. Mig33 hopes to get a jump on those companies, which have been focused on dominating their own market while Mig33 has focused on mobile-first markets such as Indonesia, India, and South Africa.

“Mig33’s goal is to replicate the East Asian social networking service model to the rest of the world,” said Steven Goh, the company’s chief executive and co-founder. “The partnerships we’ve established today will be strategic in helping us consolidate our lead in emerging Asia as we tap these big, underserved markets.”

Besides Gree and Sugiono, other investors include Accel partners, Redpoint Ventures and DCM. To date, Mig33 has raised more than $34 million since its launch in 2005.