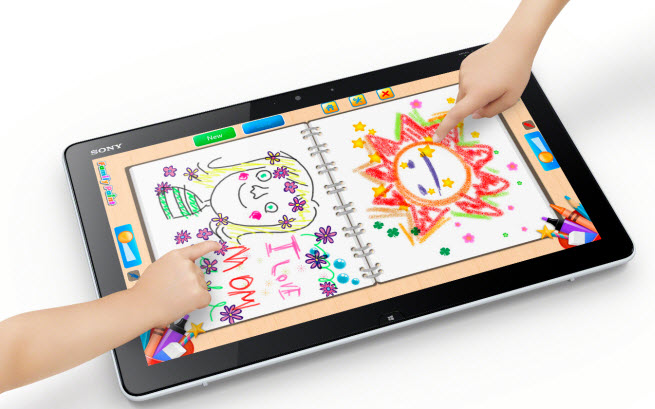 Sony is unveiling a clever take on the all-in-one computer. Its new Vaio Tap 20 PC has a 20-inch touchscreen and runs Microsoft’s upcoming Windows 8 operating system. But it also has a detachable screen that you can unplug from the wall and carry around the house as it operates on battery power. 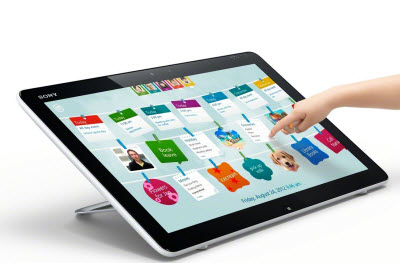 This leads to some very cool uses, such as turning it into an artist’s easel for kids, who can take the device from one part of the house to another without having to turn it off. As you move it, this PC remains connected to Wi-Fi.

The new machine may be unique in the market, and it could help Microsoft live up to its promise of making the PC more personal with Windows 8. With this PC, you’ll be able to do many things, such as playing board games or finger-painting.

The Vaio Tap 20 has a 20-inch touchscreen with a removable battery. It has Sony’s Mobile Bravia Engine 2, which delivers great picture quality on an IPS panel, which you can view from many angles. It has a built-in kickstand, and you can also place it on a larger stand that is part of the all-in-on system. It is a fully functional desktop PC on which you can work on documents, surf the web, read email, and play with cool finger-painting apps. It comes with a wireless keyboard and mouse. 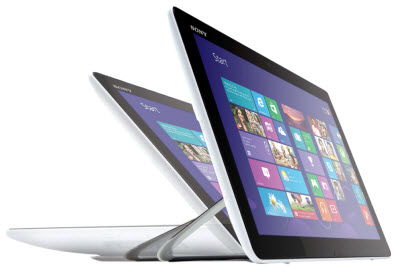 Sony partnered with digital arts software firm ArtRage on the finger-painting app, which comes with the PC for no extra cost. The ArtRage Studio offers natural painting tools such as oil paints, watercolors, and utilities that make drawing with a finger or stylus simple. You can trace a pattern using your finger or stylus.

Sony also included Sony Pictures’ My Daily Clip, a movie-trivia game that lets four players gather around the Tap 20 PC. They can watch a Sony Pictures movie clip and answer trivia questions to gain points they can trade in for prizes. You can also use the family scheduling app to post memos or calendar reminders for family members.

Sony’s one-touch function lets you listen to music and view photos across an array of near field communications (NFC) wireless devices. You touch one device against another to establish a wireless connection. The Tap 20 has advanced audio technologies including Sony’s Clear Phase, XLoud, and other technologies. The Vaio Tap 20 will be available later this month at Sony’s online site and retail stores for $879.99 and come in black or white.

The Tap 20 uses Intel’s Ivy Bridge processor, which combines a microprocessor and graphics in a single chip. The screen is drip resistant, and it has a drain in case you spill on it.