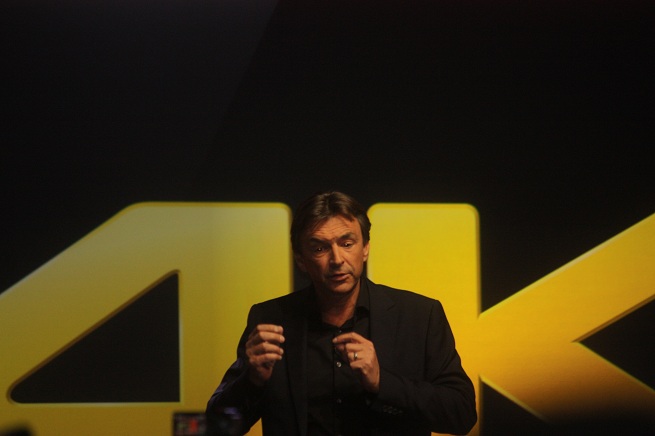 Sony said today it will launch several new 4K Ultra HD televisions. It will also start filling out the ecosystem to support the switch to a new line of brighter and crisper displays.

Phil Molyneux, head of Sony Electronics, announced at Sony’s press event at the Consumer Electronics Show that Sony will launch new 55-inch and 65-inch 4K TVs in addition to the 84-inch TV it has already launched. The move is similar to announcements by a number of other TV makers at the show today.

“It’s really like looking through a window,” Molyneux said.

He said Sony would launch the first 4K video distribution service to provide more content for 4K TVs. Movies such as the Amazing Spider-Man are available in 4K Ultra HD, but a lot more content has to materialize before consumers will join the bandwagon. Sony has 4K digital cinema projectors in 14,000 theaters and has now launched a 4K video camera for consumers. Sony Pictures plans to release a number of Blu-ray 4K movie discs in the spring.

Sony also announced a 4K 56-inch OLED display. But, unfortunately for Hirai, the TV gave a blue screen when it was unveiled.

“Excellent,” Hirai said, when the TV failed. Everybody laughed, except the Sony employees, who wheeled the TV off the stage.