Camera fans have split into two groups. As they trade up from point-and-shoot cameras, some like the new, smaller mirrorless models. But many also like the bulky, professional look and feel of DSLR cameras.

So Sony Electronics is launching a camera for each kind of customer today. The models include the DSLR Sony Alpha 3000 and the DSLR-style NEX-5TL/B. The cameras have some cool new features such as NFC (near field communications) so that you can quickly transfer photos to your smartphone and then upload them to the web. You can share pictures with a single button push. The sub-$700 cameras are aimed at amateur camera enthusiasts, who account for half of the market these days. 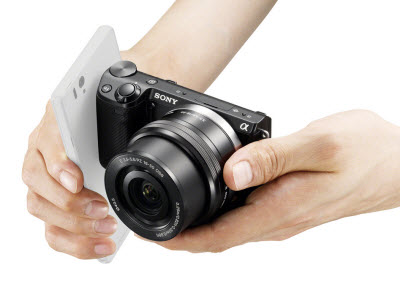 The Alpha 3000 (pictured at top) has a Sony E-mount interchangeable lens with a Exmor APS HD CMOS sensor that can capture pictures in a glorious 20.4 megapxel image. It can also capture videos in high-definition resolution at 60 frames per second. It has a 3X digital zoom, and its focal length is 27 millimeters to 82.5 millimeters. It has a 3-inch display with a “live view” feature, which actually works as fast as a point-and-shoot camera when shooting. It can shoot 3.5 frames per second.

You don’t have to be a lighting expert to use the camera. You can take panorama photos, and it has modes to deal with landscapes such as sunsets, night, twilight, and motion blur. You can edit on the camera, removing red-eye. The camera weighs 7.8 ounces and has a rechargeable Lithium NP-FW50 battery. It is the successor to the popular NEX-5R, but the 5T has a better lens. It sits above the NEX-M entry-level camera.

The NEX-5TL/B is a 16.1-megapixel device with Sony E-mount interchangeable lenses. It has the same Exmor CMOS sensor and can shoot 10 frames per second, all the while tracking a moving subject. It has a 3X optical zoom and a 4X digital zoom. The focal length is 24 millimeter to 77 millimeter. The camera weighs 4.1 ounces. It has a 3-inch touchscreen display that can tilt 180 degrees. It also has NFC and built-in Wi-Fi. This is a more compact camera, with about half the size and weight of the Alpha 3000.

“These target the entry-level user,” said Kenta Hanjo, a product manager at Sony Electronics, in a press briefing. “It’s for someone who owns a smartphone and point and shoot and wants to step up their photography.”

With NFC, you can share images immediately via friends on Facebook. You do that by putting your phone next to the camera and putting the camera in preview mode. The camera will recognize the Wi-Fi-enabled phone and then transfer the image to your smartphone’s gallery. There, you can edit them before sending them on to Facebook.

“Those are very interesting use cases,” Hanjo said.

Infotrends, a market researcher, found in a survey that 60 percent of camera purchasers wanted DSLR-style cameras, while only 40 percent wanted the smaller models.