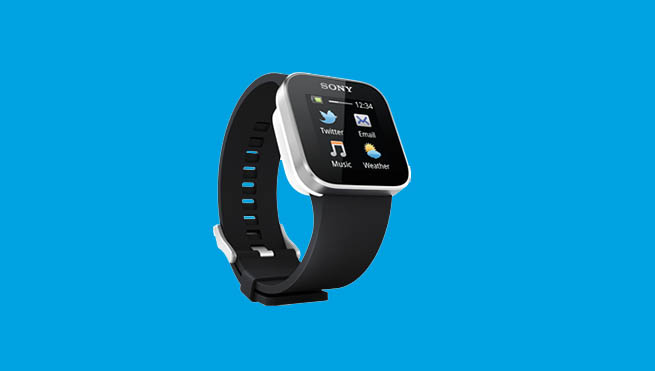 First seen at the Consumer Electronics Show in early 2012, Sony has launched its SmartWatch, an Android-powered watch with its very own apps.

The watch connects with your Android phone and will vibrate when you get a text message, phone call, or email. And don’t bother digging through your purse or pockets for your phone, the watch will even display messages on its tiny 1.42-by-1.42-inch screen.

Sony has priced the device at $150, which is cheaper than the competitors. The watch connects via Bluetooth to your Android phone to get all those must-have updates. You can also download Google Play apps to the watch, though it’d be hard to read Twitter on such a tiny screen. It comes with a default black wrist band, though pink, white, mint, grey and blue bands are available for $20 each.

If this watch-from-the-future looks familiar, it’s because you’ve probably seen something a lot like it before. There is the Pebble for iOS and Android, which just netted $1.17 million in 30 hours on Kickstarter, and the I’m Watch, which also made it big on Kickstarter in late 2011. Watch maker Fossil used the technology from Metawatch to create its own smart watch. Even Apple is in on the game with the sixth generation iPod Nano. The little square MP3 player Apple debuted in 2010, can be placed in a watch band, and of course supports Apple based apps.

As ugly as Sony’s Smartwatch and others like it are, I’d probably wear one. My phone blows up all day long with notifications and while I could just shut them all off, most of them are important. Instead of looking at my phone every time it vibrates, I could glance at my wrist and determine if what happened is worth my attention. Random emails from someone I don’t know would be read later, and calls from my mom would be answered immediately, provided I had a Bluetooth headset handy.