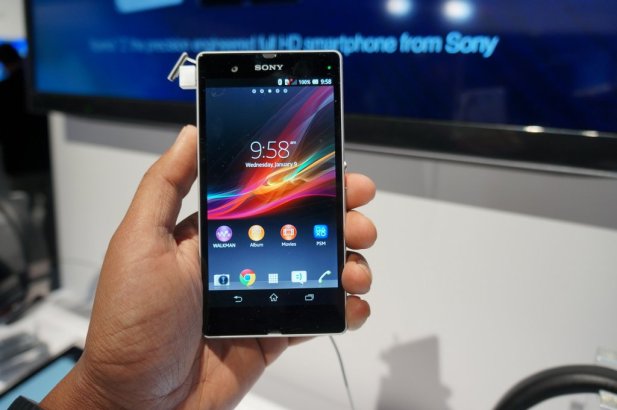 Judging from my short time with it, it’s also one of the most elegant Android phones I’ve seen. Sony has emphasized premium materials all over the device, from its 1080p 5-inch screen and  iPhone 4-like glass rear, down to the design of its power button (see photos below).

The phone is waterproof and dust proof — so, not surprisingly, it feels solid and high-quality in your hand. There’s no cheap plastic here, so common on other Android handsets.

The Xperia Z felt fast while bouncing around Android’s interface and switching between apps. You can thank its 1.5 gigahertz Snapdragon S4 Pro processor and 2 GB of RAM for that. It’s not the only speedy Android phone around, but it’s certainly one of the most refined. LG’s Nexus 4, for example, also sports a glass rear, but it feels incredibly cheap and garish compared to the Xperia Z. At this point, I hope that Google ends up tapping Sony for its future Nexus phone. (No, I’ll never get over the cheesy semi-holographic design on the rear of the Nexus 4.)

My only gripe with the Xperia Z is that it relies on Sony’s custom Android skin, which I’ve found to be slow and problematic in the past. Sony has also been slow to release Android updates in the past, so that’s another potential worry for Xperia Z buyers.

Pricing and availability for the Xperia Z hasn’t been announced yet. Sony also introduced the Xperia ZL this week, a slightly thicker (but also smaller) phone without the dust and water resistant case.