Sony Electronics is launching four new video cameras that emphasize how the video market is splitting into different segments, such as music video cameras or wearable action video cameras.

The new cameras include a 4K handheld movie camera, an action video camera, a music video recorder, and Cyber-shot video cameras that interact with your smartphone. Sony’s line-up at the IFA Berlin trade show targets specific kinds of video cameras at each unique market segment. All of these products show that Sony is quite serious about hanging on to its solid position in video cameras. Here’s a closer look at the new line-up: 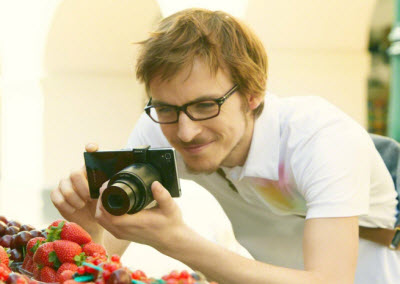 With the Cyber-shot QX10 and QX100 cameras, Sony hopes to redefine mobile photography. The “lens style” QX cameras (pictured at top) link to a smartphone using Wi-Fi connectivity. They also offer high-quality images and high-definition videos that can be shared instantly. The cameras use the Sony PlayMemories Mobile app (for iOS and Android devices) to connect wirelessly to a smartphone. You can also lock the lens-style camera directly to the phone, so that you can hold them as if they were a single device. Or you can hold the lens camera in one hand and the viewfinder on the smartphone in another. While the cameras look like a lens, they have their own shutter releases, memory card slots, and rechargeable batteries.

Once connected, the large screen of the phone becomes a real-time viewfinder with the ability to release the shutter. That means you can take pictures by touching your smartphone screen. You can also start and stop movie recordings and adjust photographic settings like shooting mode, zoom, auto focus areas, and more. The app can be activated using near-field communications “one-touch” with compatible devices, including Sony’s new Xperia Z smartphone. When you take pictures, they are saved directly to the camera and to the phone as well, and they can be shared instantly via social media.

“With the new QX100 and QX10 cameras, we are making it easier for the ever-growing population of ‘mobile photographers’ to capture far superior, higher-quality content without sacrificing the convenience and accessibility of their existing mobile network or the familiar ‘phone-style’ shooting experience that they’ve grown accustomed to,” said Patrick Huang, director of the Cyber-shot business at Sony. “We feel that these new products represent not only an evolution for the digital camera business, but a revolution in terms of redefining how cameras and smartphones can cooperatively flourish in today’s market.”

The QX100 camera has a 20.2 megapixel Exmor RCMOS sensor, with the ability to capture ultra-low noise images in all types of lighting conditions, including dimly lit indoor and night scenes. The sensor is paired with a fast, wide-aperture Carl Zeiss Vario-Sonnar T* lens with 3.6 times optical zoom and a Bionz image processor. 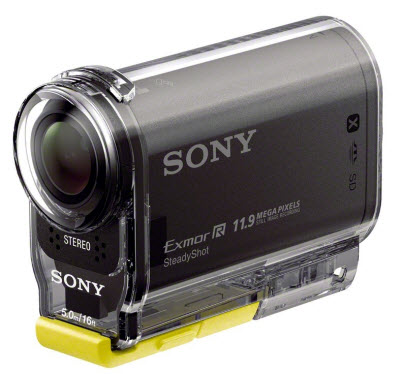 The Sony HDR-AS30V Action Cam is a point-of-view camcorder for the fast-growing category of action cameras, which you can wear on your helmet to record a valiant run down a ski slope or mountain bike trail. It can shoot videos in 1080p high-definition and take detailed 11.9-megapixel still shots too.

The Action Cam weighs 3 ounces with a battery and ships with a ruggedized, waterproof housing that is 35 percent lighter and 25 percent smaller than its predecessor. In contrast to the prior generation, the new one comes with global positioning system (GPS) navigation and time-lapse photography options. It also has SteadyShot image stabilization and a 170-degree field of view. You can add various types of memory cards and attach an HDMI cable for output.

“The highlight of this product is GPS,” said Mark Weir, senior manager of technology and marketing at Sony, in a press briefing. “We can do this because we are in so many businesses.”

You can wear the point-of-view camcorder on your head or helmet, on your wrist, or on your handlebars. Then you can check the camera angle using your smartphone. The wearable device has a new Live-View remote, which is an optional $149 accessory to the camera. The wristwatch-style, waterproof controller can sync the camera to a smartphone via Wi-Fi. You can wear this remote when you are in a hostile environment, like when you’re surfing and can’t use a smartphone.

You can then share the images or video with your friends, using the NFC one-touch image transfer. The video can be tagged with GPS coordinates so you can see in a replay where you were on a map while you were surfing in the ocean. During the playback, you can trace your course on the map.

You can position two video cameras that capture video simultaneously, showing you where you are going and where you have been. You can then merge those two videos into a single video with both videos running side by side. When you share those videos, your friends can see both views. The HDR-AS30V will be available in late September for $300, while the current HDR-AS15 model will be offered at a reduced price of $200. 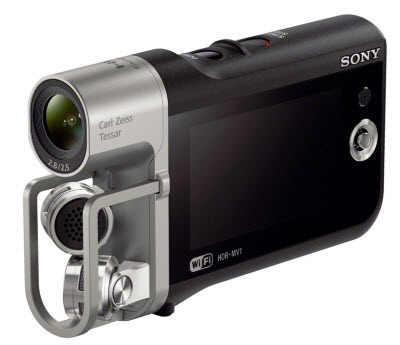 Sony is bringing back memories of the Walkman audio player with something novel: the HDR-MV1 Music Video Recorder. This video camera is engineered for musicians so that they can record their videos on stage and transfer them easily to the web. It takes videos in full high-definition and with dynamic studio-quality sound.

“Marrying Sony’s industry-leading audio and digital imaging technology, HDR-MV1 is the perfect video capture solution when audio is key,” said Hidenori Toyoda, director of the camcorder business at Sony Electronics. “With the web being a major hub for established and budding music talent, the camcorder’s ability to easily upload high quality content sets it apart from other devices.”

The camera is targeted for use at band rehearsals, practice sessions, and live gigs. It records CD-quality audio in uncompressed Linear PCM or Internet-ready AAC format. It has a 120-degree X-Y stereo microphone that can be tuned for clear recordings. Microphones or instruments can be directly connected to the device. It has a speaker on-board so users can check recordings easily. It has a 2.7-inch LCD and built-in Wi-Fi. It works with Sony’s PlayMemories Mobile app to share to a smartphone or tablet. It also has NFC support for one-touch transfer to Xperia phones, tablets, and other Android devices. The recorder will be available in December for $300.

The slim, portable MV1 music video recorder captures every detail of musical performances — from soloists and groups, to orchestras and bands — in rich audio with its 120-degree X-Y stereo microphone that can be tuned for clear, undistorted recordings. Adding versatility, external microphones or instruments can be directly connected to the device and there’s also a convenient speaker on-board so users can check their recordings instantly.