It’s that time again: the time of year when Sony Mobile, the division of Sony responsible for fitness bands, mobile apps, and the long-running Xperia smartphone lineup, refreshes its core portfolio. It selected MWC Barcelona (formerly Mobile World Congress) as the venue, as it has historically, where it’s vying for attention in a crowd of heavyweights including LG, Oppo, HMD Global, and Huawei. Though cutthroat the competition might be in 2019, it’s hoping its trio of new handsets — the Xperia 1, the Xperia 10, and the Xperia 10 Plus — are just differentiating enough to steal the spotlight. And it might be right.

The Xperia 1 is the cream of the crop in Sony’s revamped lineup. In a prebriefing with reporters, company reps pitched it as something of a relaunch of the XZ series with a focus on optics — and immersive experiences.

It’s necessarily taller (167 millimeters) and wider (72 millimeters) than your average smartphone, but not noticeably chunkier — the Xperia 1 measures in at 8.2 millimeters, only slightly thicker than the Galaxy S10 (7.8 millimeters) and thinner than the iPhone XR (8.3 millimeters). Corning’s Gorilla Glass 6 protects the screen from up to 15 consecutive drops from 1 meter, and a glass-and-aluminum outer shell prevents dust and water from seeping in where they shouldn’t. 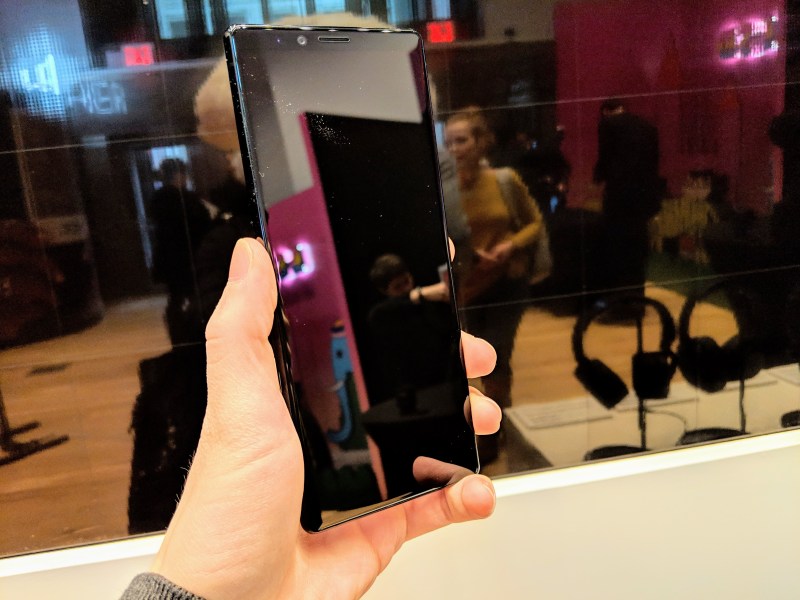 The 6.57-inch screen, speaking of, is the world’s first 4K HDR OLED on a phone — one with an ultra-wide 21:9 aspect ratio, the same aspect ratio designed to show films shot in CinemaScope and the modern anamorphic format 2.29:1. As with Xperia displays before it, it draws on Sony’s Bravia TV technologies for “improved” contrast, color, and clarity and support for the DCI-P3 and IT-R BT.2020 color spaces.

So what’s the big deal screen with 21:9? Well, Sony Mobile says it’s collaborating with Sony Pictures Entertainment — the studio arm responsible for such hits as The Karate Kid, Spider-Man, and Men in Black — to bring films and TV shows shot in native 2.29:1 to the Xperia 1 without letterboxing (the thick black bars that typically fill out the top and bottom of ultrawide content that’s been squeezed into a 16:9 screen). Moreover, it says it’s in talks with game developers such as Epic Games, Gameloft, and Tencent to optimize titles like Fortnite, Asphalt 9, and Arena Valor for the added display real estate.

Those aren’t the only advantages the 21:9 screen affords, according to Sony. Though it won’t be available at launch, the company says it’s experimenting with a multitasking feature that fits more apps (and more of those apps) onscreen than Android’s native split-screen mode, and it also says it’s testing icons and Google Assistant voice commands that will make it easy to activate that feature from any screen. And it features what Sony’s calling “Creator” mode, which delivers better-than-average color accuracy.

The Xperia 1’s other headliners are the cameras. There’s an everyday, average 8-megapixel shooter on the front — nothing out of the ordinary. But with respect to the rear, Sony’s jumping on the three-sensor bandwagon, following in the footsteps of Huawei, LG, and Samsung. 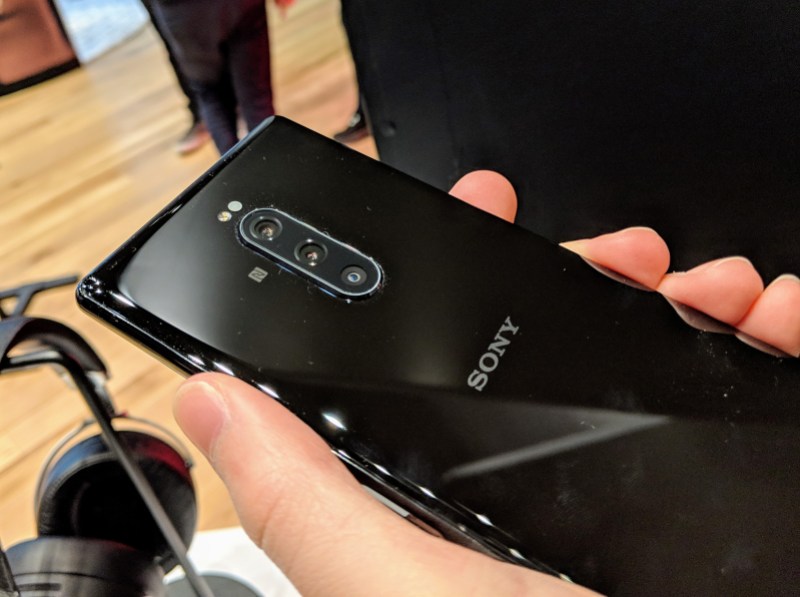 The cameras are a versatile bunch besides, capable of recording 4K HDR videos enhanced with Sony’s BIONZ X image processing engine, the same chip inside Sony DSLRs like the Alpha a99 II and RX100 III. Slow mode is present and accounted for — the Xperia 1 can shoot up to 960 fps at 1080p resolution (or 60 fps/30 fps at 1080p/4K) — as is portrait-style photo mode that creates bokeh, the stylized effect produced by slightly blurring the background while maintaining lock focus on the foreground.

There’s more to it than meets the eye, too. Sony says its Professional Solutions and Venice digital camera team — the team that’s collaborating with James Cameron on the Avatar film franchise — worked to bring features from the company’s α (Alpha) line of interchangeable-lens cameras and CineAlta film brand to the Xperia 1, among them a redesigned camera app interface with eight presets and built-in noise reduction algorithms. Additionally on tap is Cinema Pro, which records 4K HDR video in 21:9 format; a 24-frames-per-second shooting mode; continuous burst shooting up to 10 frames per second with autofocus and auto exposure tracking; and eye-level tracking (Eye AF).

As with previous handsets in the Sony’s Xperia family, audio is front and center on the Xperia 1. It boasts stereo speakers driven by a “smart” amplifier, and support for Dolby’s Atmos 3D simulated surround sound technology and Hi-Res audio (i.e., recordings with over a 44.1 kHz sample rate and a 16-linear bit depth). That’s in addition to Sony’s Digital Sound Enhancement Engine (DSEE HX) technology, which the company claims improves the quality of standard-bitrate tracks to “near Hi-Res Audio” with wired headphones, along with LDAC, a Bluetooth audio specification that transmits up to three times as much data (990Kbps at 24-bit/96kHz) to compatible wireless headphones, earbuds, and speakers.

Also in tow is Sony’s Dynamic Vibration System, which analyzes sound spectrograms and translates them into haptic motor whirs.

At the heart of the Xperia sits Qualcomm’s Snapdragon 855, a 7-nanometer eight-core chip that’s up to 45 percent faster overall thanks to a 64-bit ARM Cortex design based on Qualcomm’s in-house Kryo 485 processor. Four cores handle the heavy lifting — one prime core clocked at 2.84GHz and three performance cores at 2.42GHz — while four efficiency cores running at 1.8GHz handle less performance-intensive tasks. Meanwhile, the Snapdragon 855’s graphics chip — the Adreno 640 — is 20 percent faster than the Snapdragon 845’s Adreno 630. 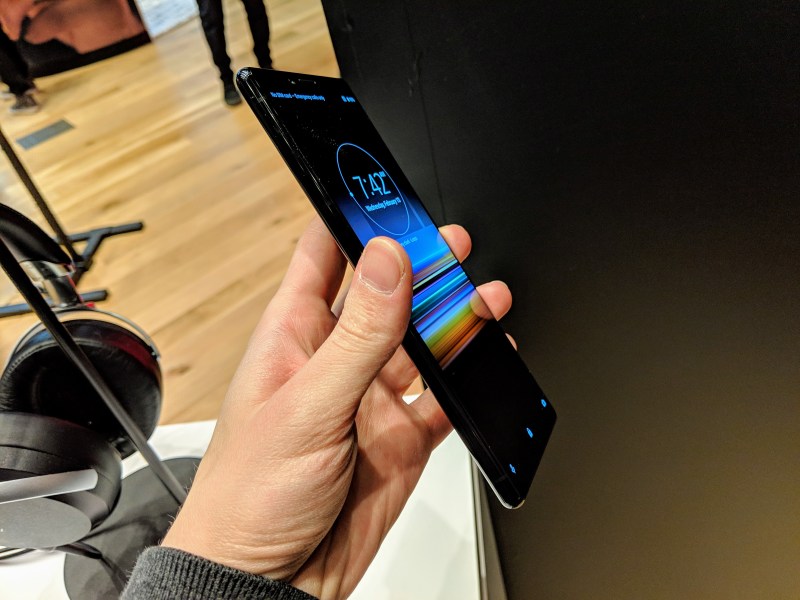 In the Xperia 1, the Snapdragon 855 is paired with 6GB of RAM and 128GB of storage (expandable via microSD card up to 512GB), and a modem that works with 802.11a/ac/b/g/n hotspots and which can achieve up to 1.6Gbps downlink speeds over LTE (Cat. 19) with 4×4 MIMO. There’s a wealth of accouterments besides, including NFC, Bluetooth 5.0, a fingerprint scanner (embedded within the sleep/wake key), and a USB Type-C connector (USB 3.1). Absent from the list is a headphone jack (sadly), and supplying power to it all is a 3,330mAh battery that Sony says lasts about “a day.”

The Xperia 1 ships in two colors — black and purple — with gray and white options to follow, running Android 9.0 Pie. It’ll hit the market in late spring.

The Xperia 10 and Xperia 10 Plus fill out the midrange in Sony’s early 2019 portfolio. The company is positioning them as the direct successors to the Xperia XA2 and Xperia XA2 Ultra, and they look the part. 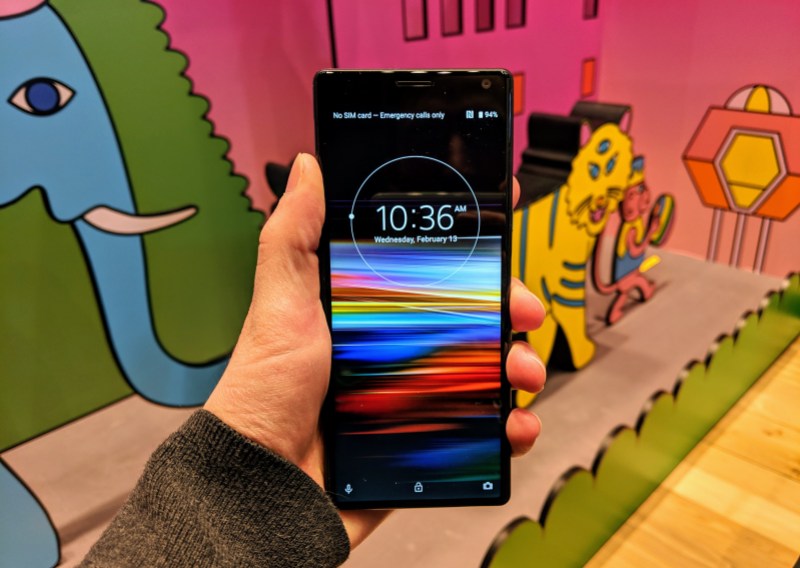 The displays — a 6.5-inch panel and 6-inch panel on the 10 Plus and 10, respectively — are once again the highlight here, albeit a few steps down from the Xperia 1 in several respects. They’re LCD instead of OLED and FHD+ rather than 4K, and both are shielded by Corning Gorilla Glass 5, not Gorilla Glass 6 — the former of which can withstand shoulder-height drops onto surfaces about 80 percent of the time. 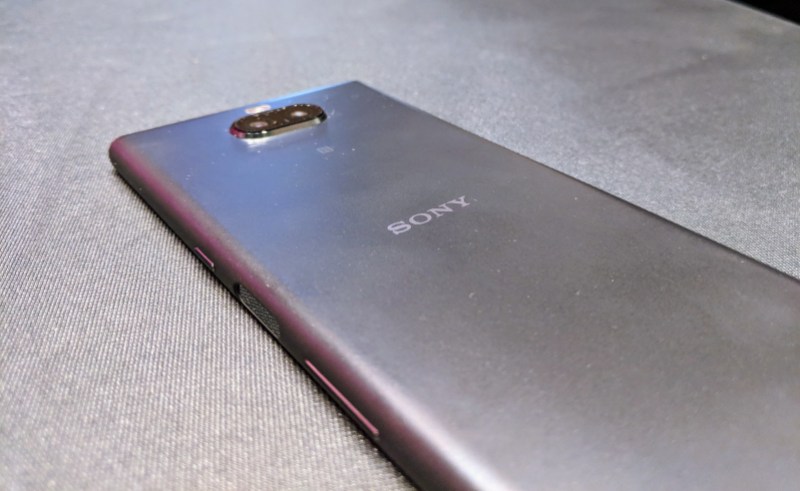 The Xperia 10 and 10 Plus have many — if not most — of the same audio features as the Xperia 1, including a “smart” amplifier, support for Dolby Atmos and Hi-Res audio, DSEE HX, and LDAC. But there are two key differences: mono speakers instead of stereo, and headphone jacks.

Under the hood of the Xperia 10 Plus, there’s a Qualcomm Snapdragon 636 humming along — a 14-nanometer, 64-bit octa-core system-on-chip with eight Kryo 260 cores clocked up to 1.8 GHz and paired with an Adreno 509 graphics processing unit (GPU) and 4GB of RAM. The Xperia 10 swaps that silicon for the Snapdragon 630, which is similarly built on a 14-nanometer process and packs eight ARM Cortex-A53 cores (these ones clocked up to 2.2 GHz), alongside an Adreno 508 GPU and 3GB of RAM. 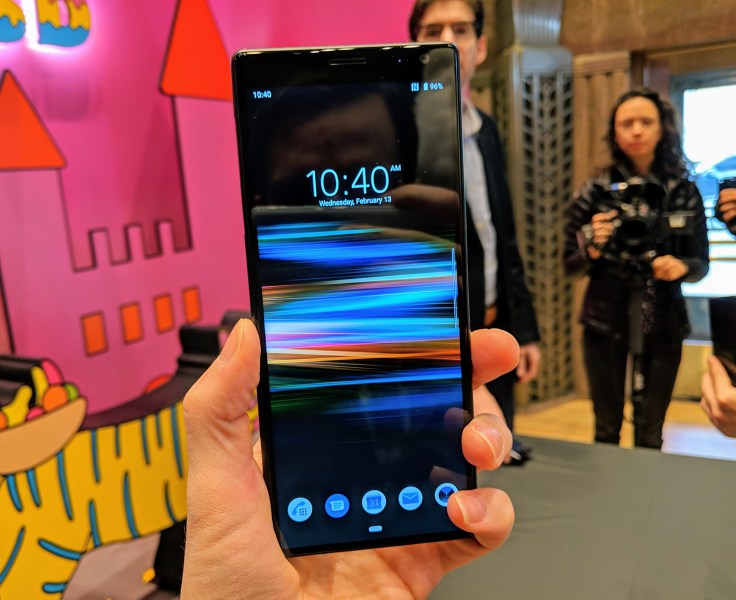 Above: The Sony Xperia 10 Plus.

On the storage, battery, and connectivity side of the equation, the Xperia 10 Plus has a 3,000mAh battery, 64GB of onboard UFS storage (expandable via microSD card up to 512GB), and a Qualcomm X12 modem — the latter of which can hit downlink and uplink speeds of 300Mbps and 150Mbps, respectively. The Xperia 10 makes do with a slightly smaller 2,870mAh battery, but retains the modem and storage capacity (64GB).

They’ll come in black and silver in the U.S., where they’ll be available starting March 18 — the Xperia 10 for $349 and the Xperia 10 Plus for $429 — from Best Buy, Amazon, and other resellers. Navy and gold colorways will come to other markets later in the year.