Founders of music streaming platform SoundCloud are looking to bring subscriptions to the burgeoning ebike market with a European startup called Dance. The company today announced it has raised a €15 million ($17.8 million) round of funding to expand the service beyond its current pilot program in Germany.

The funding follows a surge in demand for electric bikes during the pandemic as people seek alternatives to crowded public transit. While ebikes had been gaining momentum over the past few years, the COVID-19 crisis has dramatically accelerated sales. In the U.S., ebike sales jumped 190% in June compared to the previous year. And reports now suggest the global ebike market could grow from less than $8 billion in 2018 to $46 billion by 2026.

Dance is the brainchild of Eric Quidenus-Wahlforss and Alexander Ljung. The SoundCloud founders stepped down from their roles at the music streaming company in 2019 and 2017, respectively, though Ljung still chairs SoundCloud’s board. Completing the roster of founders is Christian Springub, cofounder of website builder Jimdo. The trio unveiled their invite-only ebike subscription service in their domestic Berlin market earlier this year, with plans to include more European cities next year. The company confirmed it would look at expanding to the U.S. “eventually.”

Dance isn’t revealing many details about its ebike beyond a few teaser images because it’s still iterating designs through the pilot phase.

“We are currently in development with our first in-house built bike, and we will launch with that model next year,” Quidenus-Wahlforss told VentureBeat. “We’re showing a hint of what is to come, versus what is going on at a small scale in Berlin today.” 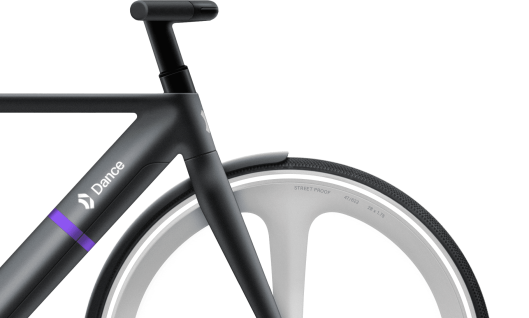 Ebikes are much like standard bikes, except they have an integrated electric motor for easier pedaling — making them especially popular with commuters, as the reduced physical exertion means less sweat. The bikes often come packed with other connected smarts, as well.

People interested in ebikes have several options. Companies such as Lime offer pay-as-you-go “dockless” services that allow users to locate the nearest ebike and pay only for the time they use. Then there is the option to purchase an ebike outright. Dutch startup VanMoof recently raised $40 million to bring its ebikes to more markets, though the two models it offers cost around €2,000 ($2,300) — a price point that is prohibitive for many.

There are cheaper ebikes out there, of course, but Dance is betting consumers won’t want to shell out hundreds or thousands of dollars only to be saddled with the extra cost and burden of maintenance and insurance. 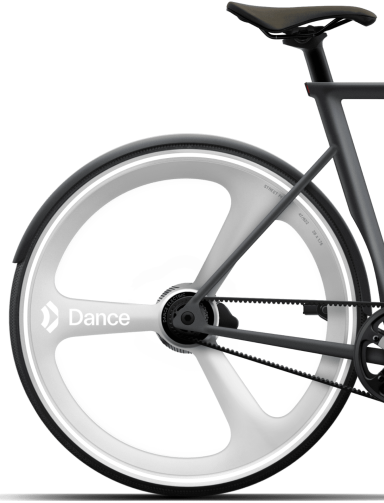 Above: Dance bike (rear)… roughly what it will look like (maybe)

For €69 ($82) per month, riders can order a Dance ebike online and have it shipped to their door within 24 hours. The monthly fee covers all maintenance and theft insurance, while a mobile app gives users the ability to tap GPS location tracking for their bike, lock and unlock it, and access concierge services such as maintenance and theft replacement.

For many, €69 ($82) is still a hefty monthly commitment, though it may compare favorably to other transport options. In Berlin, a monthly public transit pass can cost up to €85 ($100), a figure that rises significantly in other cities around the world — a citywide monthly travel pass in London, for example, can cost more than $300. Although Dance isn’t ready to discuss localized pricing for a global expansion, it’s likely to factor in local transport costs when setting its monthly subscription fee.

“Making ebikes accessible and affordable for everyone is at the core of Dance, and our prices and terms reflect this,” Quidenus-Wahlforss said. “We wanted to make the price in line with or cheaper than alternative transportation costs, and at the same time offer the best ebikes to our customers.”

Dance users aren’t locked into subscriptions, which is another selling point, especially for riders who may be new to ebikes.

“It was important that customers didn’t feel locked into contracts, so we have made it so that users have the ability to cancel their subscription at any time,” Quidenus-Wahlforss added. “We also offer a three-day free trial period so that people can decide if ebikes and our service is the right fit for them.”

Similar to VanMoof, Dance is taking a “holistic” approach to its service and developing everything itself, including the hardware, software, and operations, though it has partnered with a Taiwanese manufacturer to build the actual bikes.

The company’s series A round was led by Holtzbrinck Ventures, a European VC fund that has backed a number of notable startups through to exit, including HelloFresh and Delivery Hero. With $17.8 million in the bank, Dance is well-financed as it prepares to launch in the coming months.

“Aside from opening up more in Berlin itself, we are currently in the planning stages of where we will expand to after, with eyes set on more European cities and eventually also the U.S.,” Quidenus-Wahlforss said. “Customers have been telling us what they expect from their vehicles, and we’ve been tweaking the software and operations based on feedback as well.”