Over the past few days, we’ve gotten multiple confirmations from reliable sources that the first phone built on Google’s Android platform will launch in the next several weeks. It will be an HTC phone, likely the HTC Dream, and will be launched internationally on the T-Mobile network. A window of between Oct 15 and Nov 30 is most likely, according to these sources.
Around mid-July we received some information that T-Mobile had started its preparations for the Android launch. A few weeks later, there were signs from the Android team that development was wrapping up and that the final software development kit (SDK) for the device was nearing completion. A few days later we began hearing that not only was the first Android phone already in existence, it was in the midst of its “first series” phase. This means it is being distributed now among selected employees/managers at HTC, T-Mobile and informed third parties. Various organizational activities, including marketing and training of employees have already started as well.

In the past weeks, amidst reports indicating Android phones may be delayed and frustrations amongst Open Handset Alliance Members, we continually heard from both Google and HTC that the first Android phones would launch before the end of the year. Now we have solid first-hand information that the launch is just weeks away. Let’s look at some of the problems which Google Android/the Open Handset Alliance (OHA) is supposed to have had in the last months: * Developers supposedly have been staying away from Android and focusing on the systems already out there: BlackBerry, Symbian, Windows Mobile and the iPhone; * Open Handset Alliance Member Sprint was arguing that Google Android is not addressing “industry fundamentals more pragmatically”;
* Google was rumored to build its own “Gphone”; * Most recently HTC is supposed to be “having structural problems to incorporate Google’s demanded feature set” and not being able to make it this year.

So what do we know ?
We quickly learned to distrust most of the speculation. We repeatedly asked Google to confirm launch dates. Answers included “phones based on the Android platform will be available in Q4 of this year” and “we remain on schedule to deliver the first Android-based handset this year.” We also learned that Google was keeping the latest version of the Android SDK from the majority of Android-focused developers as Zdnet reported.

Around mid-July, we had some information that T-Mobile started its preparations for the Android launch. At the beginning of August, there where signs from inside the Android team that they reached an important point in development. They released the final SDK for the Android Developer Challenge participants — suggesting the release to handset manufactures was near. Some days later we heard a confirmation from another, reliable source that T-Mobile is preparing the launch and this person was willing to share some actual information. After we learned this, we took it to others, and they were willing to talk. This is what we consider as confirmed information: The first “Android phone” exists. It’s a HTC phone and it appears to already be in the “first series” phase as it is being distributed now among selected employees/managers at HTC, T-Mobile and 3rd parties. Various organizational activities, including marketing and training of employees, have started. 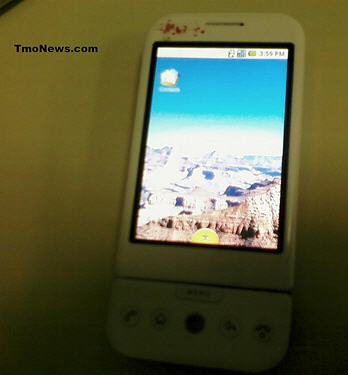 How will the phone look like and what are the phone’s characteristics? I can not confirm any of this, but I assume leaks wil start to happen now and in my experience Tmonews is quite well-informed, reliable and seems to have some insiders at various positions. This image from Tmonews (left), however, seems not to show the final version of the phone.

Also, I am certain that the circulating videos are false, as the devices are still kept in the closet. Also, I can comment on the release date. Tmonews, which I’ve linked to above, is speculating about Sept. 17th. From comments from our sources, and calculations about things like approval times, however, we assume a launch window of Oct. 15 to Nov. 30. The launch will be international, and held in stages. Let’s break down some of our calculations:
We expect the final public Android SDK to be released in the next 4-6 weeks. We hear this time period from various sources and this view seems already to be pre-eminent on newsgroups. The developer release earier this month suggested that at the time the manufacturing of the “first series” was probably near. Information/troubleshooting from the “first series” will be included into the release. This final public release of the Android SDK will make more exact predictions possible. From submitting the phone to the FCC until launch can take as little as four to five weeks. Take the iPhone, for example. It was submitted on June 1st, it was approved on June 9th and the relevant information was confidential until the July 11. In the six weeks before the release, we will see a lot of leaks, news and occasional marketing. It seems that for the US, in terms of marketing, October 1st will be a significant day as that’s when T-Mobile USA wants to launch its 3G network.

We’ve already reported on the coming T-Mobile app store. There’s been much speculation on the nature of how the applications should be distributed. From the Google Android team, there are only general statements. Android’s Andy Rubin said at the Google I/O on May 28th that “I have nothing to announce today, but we thought of it. We wouldn’t have done our job if we didn’t provide something that helps developers to get distribution.” From what we hear, Google is apparently putting the applications stores into mobile operator hands. Can we expect other mobile operators from the Open Handset Alliance to switch to app store models? 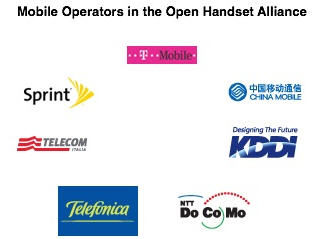