Hot streaming music service Spotify will soon add two slick new features it hopes will boost music discovery for its users. One of said features lets you find playlists for all occasions and the other lets you chat about music with your friends.

Spotify competes with streaming music services across the spectrum including Rdio, Rhapsody, and Pandora, so adding advanced discovery features help the service differentiate itself and keep its users coming back. The service also recently took a big step toward making its comedy library more accessible with its Official Comedy app.

First up in the new feature docket is Browse, which lets you look through all kinds of playlists. Spotify purchased playlist curation startup Tunigo back in May, and Tunigo’s employees were especially good at making playlists for every type of event. Browse is the first big item Tunigo has turned out for Spotify.

“Browse is the next piece of the music discovery puzzle,” Charlie Hellman, VP of Product at Spotify, told VentureBeat. “Browse lets you explore the universe of Spotify playlists.”

Spotify dubs Browse a way to find “playlists for every mood and moment.” If that language sounds familiar, it’s because New York City startup Songza focuses on that exact purpose as well. Ideally, Browse brings Spotify up to speed in the area of playlist curation that Songza has done so well, but we will see it matches it after using it a bit.

Hellman said he’s familiar with Songza, but said Browse was really about adding more discovery features to Spotify. “We’re trying to put all use cases into one service,” Hellman said.

Some of the types of playlists Browse can provide include songs for working out, going to sleep, or hosting a dinner party. Browse also includes access to new releases, which is something power users like myself have been wanting to see ever since the Discover feature replaced the What’s New box. One other cool aspect in Browse is playlists by genre, which can help you get introduced to a genre you don’t know well.

Browse is rolling out to iOS and Android devices first starting today, but it will come to the desktop and Web versions in the next few weeks. 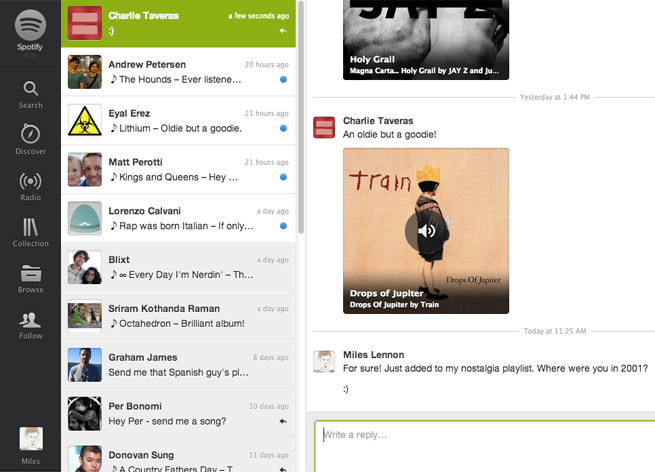 The other big feature is Messages. Before, Spotify offered a feature called Inbox, where you could see songs your friends and family sent you. Messages replaces the Inbox and makes it better by letting you actually talk about an item that was shared with you. So any time someone sends you a song, album, or playlist, you can now actually talk about it. Messages does not let you start a conversation with a friend without first sharing a music object, but once you share something conversations can go on for as long as you want.

“Sending songs back and forth has been there for a while, but we wanted to take that further,” Hellman said. “Our goal is not to compete with social networks like Facebook … but we want to let people talk about music.”

Messages will roll out of the web client first in the next few weeks. Then it will bring Messages to the desktop app and then to the mobile apps. You can see what Messages looks like in the screenshot above.

Take a look at some screens from the new Browse feature on Android below.