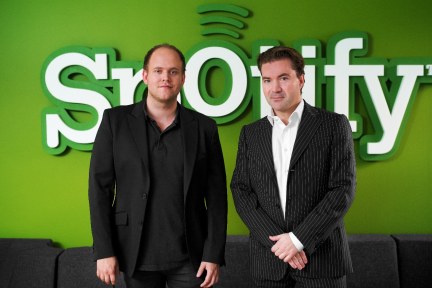 Spotify has also introduced a music store for mp3 downloads in which users can buy a batch of 10 tracks for $13.20. This makes a single track comparable in price to iTunes’ $1.29. Users can buy a bundle of 100 tracks for a cheaper $82.56.

Spotify’s 10 million subscribers have created 200 million playlists, but getting Spotify playlists onto iPods in mp3 format has, thus far, been a serious hassle. The new synchronization feature bypasses iTunes and puts a second copy of the music (in addition to the iTunes version) onto the iPod or other device. Most Premium users apparently already remove the iTunes copy from the device and synchronize their playlists directly via Spotify.

Spotify recently reduced the number of hours that free users can listen to music from 20 to 10 hours per month. The new sync feature may be an attempt to mollify those 9 million users who continue to use Spotify Free. In addition, most people listen to considerably more music on mobile devices than on their desktops.

Spotify is based in Sweden and has 10 million users around the world (1 million of whom are paying customers) in Finland, France, Norway, the Netherlands, Spain, Sweden and the U.K. The company has received funding in $120 million and is valued at around $1 billion.