Music streaming leader Spotify has threatened to cut off service to some customers and is demanding that they confirm their home addresses with GPS data or risk losing access — a move that has upset users and raised personal privacy concerns, according to a Quartz report.

The controversy concerns the unauthorized use of Spotify’s $15 monthly “Premium for Family” plan by friends or even family members who don’t live at the service purchaser’s home. Family plan purchasers agree that up to five people may share the Spotify account, provided that they live at the same address — a requirement likely imposed to curtail unauthorized music sharing.

But service provider audits of shared family accounts are uncommon, and from customers’ perspectives, generally unwelcome. Streaming companies such as Amazon, Apple, Hulu, and Netflix generally permit or specifically sell services offering multiple simultaneous streams and typically don’t shut down accounts based on use from different locations. Occasionally, however, companies have cut off customers who are clearly abusing shared service.

In Spotify’s case, the company is presenting Family users in the United States and Germany with dialog boxes that say continued use of the group discount service requires that the user confirm a home address using GPS data. “By confirming your location, you get to enjoy Spotify Premium for Family, and help to pay artists fairly for their music.” The company claims that it will solely use the GPS data to verify the user’s location, “and nothing else.” 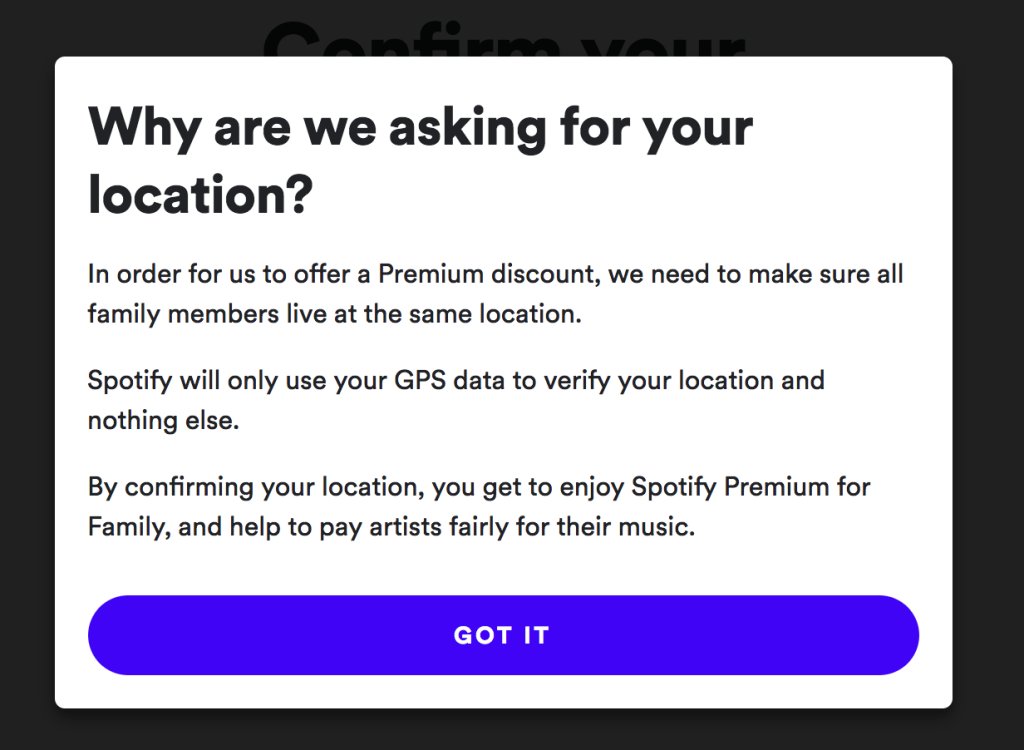 Spotify confirmed the messages to Quartz, calling them tests of “improvements to the user experience” for Family users in select markets. But they actually appear to be geared solely toward improving Spotify’s average revenue per user, which has recently declined due to heavy use of family plans — particularly an issue for a recently publicly traded company seeking constant growth.

It remains to be seen whether this plays out as Spotify expects, with compliant users cutting off friends and far-flung family members, or whether it causes the service to lose clusters of customers to thirsty rivals such as Amazon and Apple. While Spotify’s desire to make more money from its sole service is understandable, initial reactions are generally in the “hostile user experience” camp, suggesting that at least some people will soon be getting their music from other sources.