Sprint may have been the first US carrier to deploy a 4G network, but it may be paying the price for being an early adopter of WiMax 4G technology.

According to a series of 1,000 speed tests conducted by BTIG Research in New York City over the past few weeks, Sprint’s 4G network gets download speeds of around 1 megabit per second on average — far slower than even 3G networks on rival carriers. By comparison, Verizon’s 4G network — which runs on competing LTE technology — achieved download speeds nearly 10 times as fast on average.

The test reveals Sprint’s deep dark secret about its 4G network: it’s simply not that fast. That’s mainly due to the company putting its weight behind WiMax technology years before it could see the potential of LTE. Now with faster LTE networks being deployed by Verizon and AT&T, Sprint’s going to have a hard time convincing consumers that they should pay extra for its slower 4G speeds.

BTIG tested the networks by using the wireless hotspot functionality on Sprint’s flagship Evo 4G phone and Verizon’s recently launched HTC Thunderbolt. The research firm tracked the speeds of both an iPad 2 and a Toshiba laptop connected to the hotspots.

Indoors, Verizon’s network averaged download speeds of 8.3 Mbps and upload speeds of 4.47 Mbps. Sprint’s, on the other hand, clocked in at 1.19 Mbps down and .39 Mbps up. You can see the full speed results in the chart below. BTIG also pointed out that Verizon’s network was more reliable, and the Thunderbolt achieved better battery life than the Evo.

It should be noted that BTIG’s Sprint 4G speeds seem slower than other speed tests, where Sprint normally achieves download speeds of around 2 Mbps to 3 Mbps. But even that seems difficult to call 4G — both AT&T and T-Mobile’s 3G networks can hit those speeds without issue. And when you compare Sprint’s 4G speeds to Verizon’s ridiculously fast LTE, it definitely seems like Sprint 4G customers are getting shortchanged.

We work closely with an independent third party research company which reports regularly to us on real-world, scientifically tested speeds and the results we see do not match what Piecyk found. We’ve recently seen speeds in NYC (inclusive of New Jersey) averaging 4-5Mbps download. We’re confident in the speed, latency and dependability of our current 4G network and in our 4G average download speed claim of 3-6Mbps with peak speeds of more than 10 Mbps download. And the Sprint 4G network will only continue to get better from here.

The Verizon 4G LTE network is very new so no one has any fully time-tested data on it yet. As their network gets loaded and more than just one smartphone comes forward on their network, we can better assess its capabilities. In the early days of 4G for Sprint, we saw some very high speed numbers when the Network was launched (much higher than our current speed claims) but what ultimately matters to customers is a consistent, long-standing experience based on a network loaded with customers. 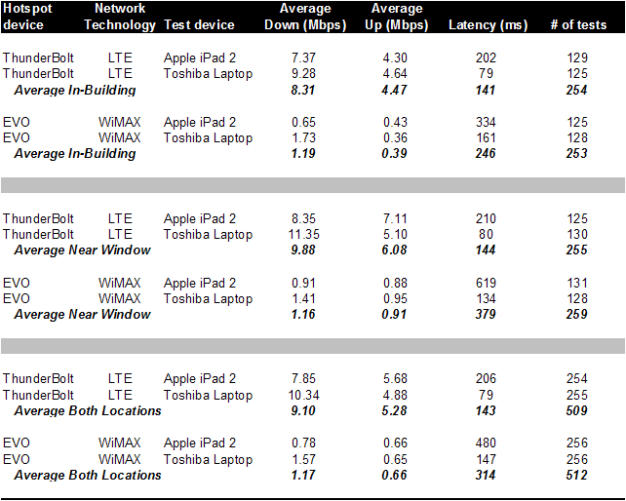