Sprint has added two new 3G and 4G mobile broadband data plans to its lineup that will replace more-expensive plans it previously offered, as well as undercut AT&T and Verizon, the company announced today.

As the distant third-place carrier in the U.S., Sprint is using every trick in the book to help distinguish itself as the best value versus its competitors, namely Verizon and AT&T. Recently, Sprint helped set itself apart from the two largest carriers when the Apple iPhone 4S was released by being the only carrier to offer an unlimited 3G data with the hyped device.

Comparably, Verizon and AT&T’s standard mobile broadband plans aren’t as good of a deal. On contract, Verizon offers 2GB for $30 a month, 5GB for $50 a month and 10GB for $80 a month. AT&T offers a similar 5GB data plan at $50 a month, but does not offer a plan with higher data usage like Verizon and Sprint.

“Sprint is committed to delivering exceptional value to its customers, and our new 3G/4G Mobile Broadband plans are the latest example of that,” said Will Souder, vice president of pricing for Sprint, in a statement. “Sprint gives customers more data at lower prices than competitors, so they can do more with their mobile broadband devices on Sprint’s 3G and 4G networks.”

A full chart with more details about the revamped mobile broadband and hotspot plans can be viewed below. You can click here for even more details. 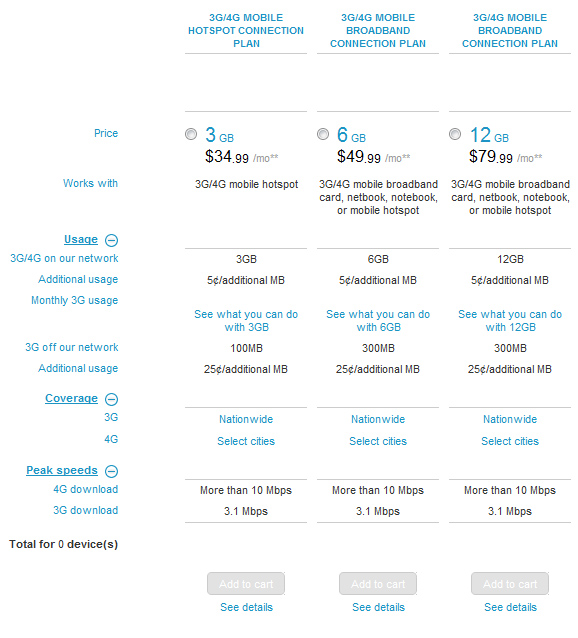