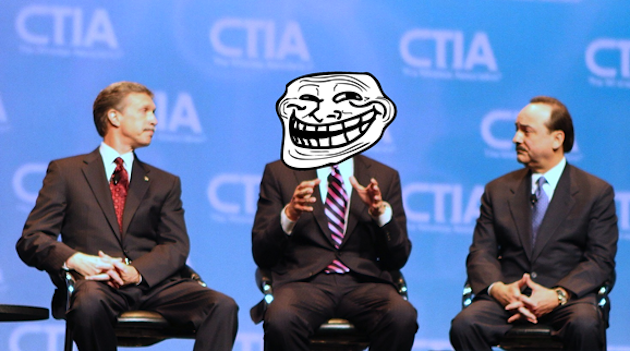 Whether intentional or not, Sprint CEO Dan Hesse may have started luring bitter T-Mobile subscribers to the Sprint network who share common ground with him when it comes to AT&T.

Neither camp thinks AT&T’s purchase of the T-Mobile network is a good idea, but only one of them (Hesse) can say they voiced that opinion directly to the face of AT&T President Ralph De La Vega.

When Hesse was asked what his thoughts were on the recent carrier acquisition while on stage — sitting between Vega and Verizon CEO Dan Mead, to top it off — for a CTIA Wireless 2011 CEO panel, he paused a bit and then fired off a response.

“My opinion doesn’t matter. I think the FCC (Federal Communication Commission) and DOJ (Dept. of Justice) with have the say on that,” adding that he doesn’t believe it’s healthy letting two companies control 80 percent of all consumer wireless communication. It’s arguable that as a former executive of AT&T in the `90’s and the current head of Sprint, Hesse’s opinion does matter.

Regardless, it got a reaction from those in attendance who weren’t expecting much commentary about AT&T’s big purchase since the news was barely two days old and all T-Mobile executives were canceled from all appearances at the CTIA show to presumably prevent just that.

“I do have concerns that it would stifle innovation and too much power would be in the hands of just two,” Hesse said, which is both an expected and justified reaction for the leader of a company playing the role of underdog in a fight with two giants.

Verizon’s Mead weighed in shortly thereafter claiming that there’s plenty of competition among carriers, which would be true if your idea of remaining competitive was based on adult CEOs playing checkers with five-year-olds who still get excited about punch. Otherwise, I think it’s safe to point out that it wouldn’t be in his company’s best interest to say anything less about competition in the marketplace.

The discussion about carrier competition ended shortly thereafter but the snark from Sprint did not. Hesse took another jab, this time at Verizon after moderator Jim Cramer posed the question of why the wireless networks go down.

“Aren’t you on Verizon?” Hesse said to Cramer as he nodded his head yes. Ironically, Verizon’s LTE network looks to be the most impressive at this point.

But perhaps it’s the entire company and not just the CEO that’s adjusting its attitude to fit new roll as the underdog carrier. In another CTIA panel, Sprint Senior Vice President of Network Bob Azzi made fun of AT&T’s marketing department for being in charge of upgrading their network.

“If three can become four, then four can become five,” he said. Without competition to point out things like this to the consumers, people will believe whatever they’re told or just have to deal with it due to no alternatives.

Even if Hesse’s words don’t resonate with all the unhappy T-Mobile subscribers who want to switch carriers, Sprint is the choice most similar to the motivations that attracted them to T-Mobile in the first place.

This post is is sponsored by Sprint, the Now Network. Learn more here. As always, VentureBeat is adamant about maintaining editorial objectivity. Sprint had no involvement in the content of this post.