Sprint’s commercial 5G network will officially launch across four U.S. cities in May, with five additional cities commencing service by the end of June, the carrier announced today. Technically, the 5G service is already live for testing in Chicago, Illinois, but average users won’t be able to access the network until the formal launches.

In addition to Chicago, Sprint’s May 5G launch will include parts of Atlanta, Dallas, and Kansas City, while the next month should see commercial service go live in parts of Houston, Los Angeles, New York City, Phoenix, and Washington, D.C. Unsurprisingly, the service will not be comprehensive or citywide: Sprint expects to start with “nearly 30 square miles covering Midtown and lower Manhattan,” with around 230 square miles in Dallas Fort Worth, for total coverage of over 1,000 square miles across the nine cities.

“Wireless customers are soon going to have their first mobile 5G experience with Sprint, and it won’t be limited to their home or a millimeter wave hotspot,” said Sprint CTO Dr. John Saw. “Real 5G is now on-air in Chicago, marking a major milestone for the commercialization of Sprint 5G using 2.5 GHz and Massive MIMO to provide fast speeds and true mobility.”

For Sprint, the difference between operating test 5G networks and delivering commercial service will come down to two factors: offering actual 5G hardware and having paying 5G customers. The carrier says that its first 5G smartphone will be LG’s V50 ThinQ 5G, while its first hotspot will be the HTC 5G Hub, both to be followed by the Samsung Galaxy S10 5G. While Verizon is scheduled to be first to offer the S10 5G to customers, Sprint promises to sell the phone by summer.

Convincing customers to sign up for Sprint 5G service is another matter entirely. The carrier is in the midst of seeking regulatory approvals for its merger with T-Mobile, which would enable the fourth- and third-place carriers to compete more aggressively against larger rivals Verizon and AT&T. In the interim, Sprint is building a 2.5GHz 5G network that will integrate with T-Mobile’s 600MHz 5G network, “sub-6GHz” offerings that require different hardware from the millimeter wave 5G networks that have already launched in the U.S. 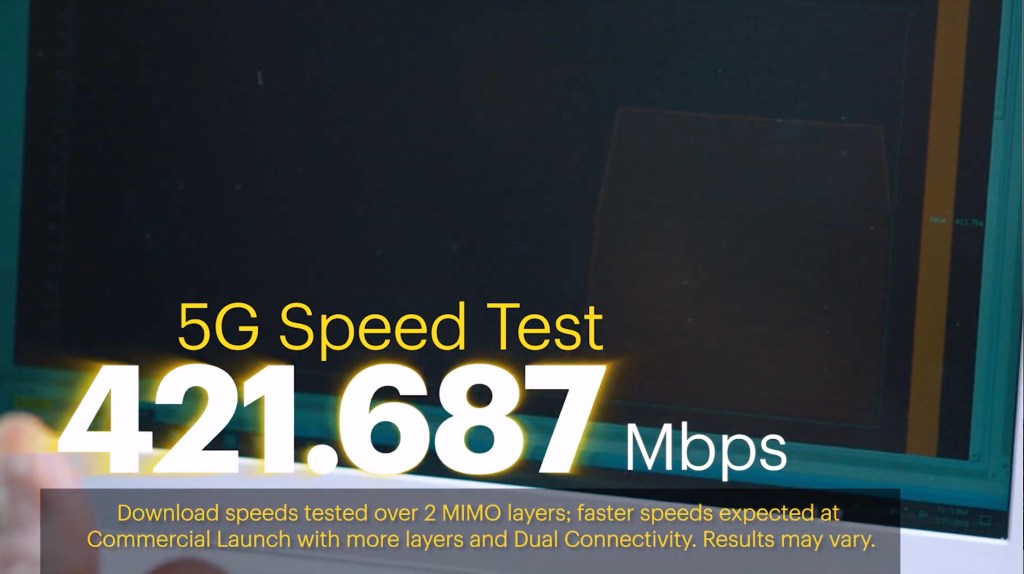 A Sprint “drive test” video released along with today’s announcement suggests that it’s seeing mobile speeds in the 420Mbps range in live Chicago testing, but it expects “faster speeds” once the service launches. That’s in the ballpark of Verizon’s advertised “typical” 5G Home speeds, but on a mobile device.

In a separate announcement, Finnish cloud gaming provider Hatch said today that it will commence U.S. service using Sprint’s 5G network, offering over 100 mobile games, voice chat, and tournaments over the network. The subscription service promises to allow users to play games over 5G without needing to download or update and will continue to work when users are on Sprint’s 4G LTE-Advanced network.

Sprint also announced today that it will offer 5G services to Google Fi customers, though few details are available on how the service upgrade will work or whether pricing will change. Sprint and Google say only that once Sprint’s 5G is available in an area, Sprint 5G-compatible Designed for Fi phones will be able to connect to the network, leaving open the question of how many phones will actually be capable of connecting to Sprint’s 2.5GHz towers.