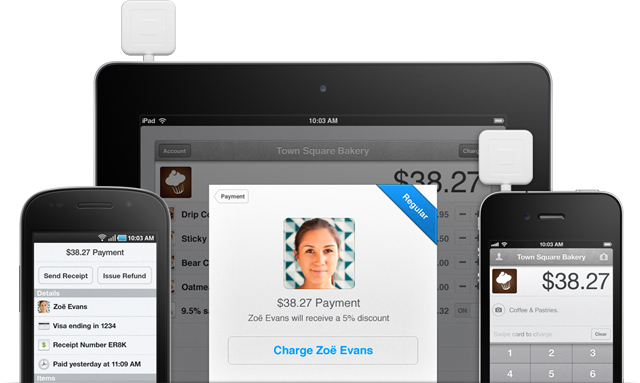 Mobile payments startup Square has updated its popular iOS and Android apps to include loyalty tracking and discounts for regular customers and further hardware support for brick-and-mortar stores, the company revealed today.

“We’re enabling merchants to recognize regulars that use the Card Case application,” Megan Quinn, Square’s director of products, told VentureBeat. “With this update, there’s no need for coupons, punch cards or third-party apps.”

Square’s mobile payments service has seen incredible growth since its debut in late 2009. Quinn said the company has signed up more than 800,000 customers in the past year, and we heard recently that it is aiming to go more mainstream by selling its credit card readers at Walmart. Additionally, Square raised $100 million back in June on a $1 billion valuation.

With the update to version 2.2 for iOS and Android, Square’s biggest new feature concerns loyalty functions. We’ve already seen the updated Card Case application, which came out two weeks ago and makes it possible to pay Square retailers without touching your mobile device. Now, when Square retailers actively serve loyal Card-Case-using customers, they can automate the process of giving those customers a discount based on number of visits or the total amount spent.

“We want to help businesses of all sizes to grow using Square,” Quinn said. “By providing a seamless discount to loyal customers, both retailers and customers win.”

The update looks almost identical to the previous version, but it adds a “regular ribbon” (as seen in the above photo) that identifies loyal customers, and there are a few extra buttons too. There are also advanced features retailers can take advantage of such as better sales tracking, new tipping support, resending of receipts and providing refunds from the point-of-sale system.

Square also told us it has added support for some commonly used brick-and-mortar hardware devices like printers and cash drawers. When a Square merchant taps the “tender” icon, the cash drawer pops open and they can print out receipts that have personalized info. For printers, the app works with Star Micronics receipt printers and Square recommends the Star TSP143LAN or Star TSP650. For cash drawers, it works with the APG cash drawer Vasario Series equipped with a MultiPRO interface, and Square recommends the Vasario 1416 or Vasario 1616.