The release comes just a few months after the app debuted on iOS.

Caviar differentiates itself from other food-ordering apps like Seamless by allowing users to have food delivered from restaurants that don’t have a delivery service. So, Caviar is both the ordering software and a delivery infrastructure provider.

Like its name implies, the service focuses on high-end restaurants, like Momofuku Má Pêche and Motorino in New York. 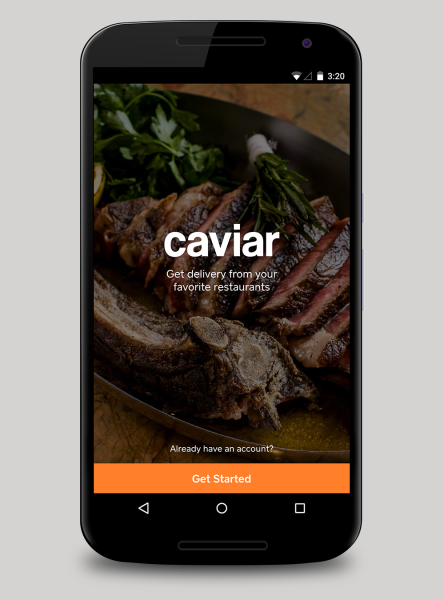 Caviar was founded in 2012 and was acquired by Square in August of 2014. The acquisition was very much indicative of Square’s desire for a presence in the food business, which it so far has been less than successful at maintaining. Square, a purveyor of mobile point-of-sale systems and back-office software, first made a go at consumer-focused mobile payments with Square Wallet. But the company eventually killed the product in favor of an order-ahead app called Square Order. Shortly thereafter, the company picked up Caviar.

So far, Caviar has launched in a total of nine cities: New York, San Francisco, Boston, Chicago, Los Angeles, Philadelphia, Seattle, Portland, and Washington, D.C. But that says nothing of the app’s success or its staying power.

Square, and by proxy Caviar, has a lot of competition in this space. In addition to GrubHub, new startups like Postmates, WunWun, and others are building robust delivery systems so that consumers can order anything they want with the click of a button. The idea is that customers will be able to not only order lunch, but toiletries and other accoutrements.

While Caviar is up against a lot of competitors, the Android app will certainly give the company an opportunity to gain wider adoption.