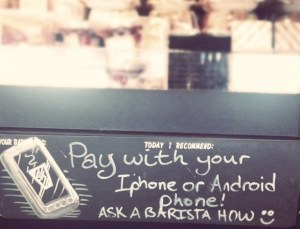 The Starbucks brand may be synonymous with pricey lattes, but the coffee conglomerate has pushed a number of mobile initiatives in 2011 to make its name also stand for digital innovation.

New numbers released Monday suggest that the strategy is working.

Add to that the fact that more than 6 million of those mobile transactions occurred during the past nine weeks — which is more than double the 3 million transactions the company saw in the first nine weeks post release — and the data shows a growing number of consumers are going wallet-free and opting instead to pay for their daily coffee runs with the Starbucks mobile app.

“We’re already out there as the largest retailer doing mobile payments,” Brotman said. “To take that step and roll out [mobile pay], see it adopted, and then see it double … that trend is very exciting to us.”

Starbucks mobile pay, a prominent feature of the company’s iPhone and Android applications, was released in the U.S. in January. Consumers can use the mobile app to load money on to a digital Starbucks Card and present a 2D barcode to pay-by-scan at the register at more than 9,000 locations. The program launched in Canada in November and will land in the U.K. in January 2012.

Brotman was reluctant to reveal the exact number of customers who have paid via mobile, but did say that millions of customers have done so. The mobile pay feature, he said, is especially popular in New York, Seattle, San Francisco, Chicago, and San Jose, all cities that are replete with brand fans and technology early adopters.

Of the $2.4 billion loaded on to Starbucks Cards in fiscal year 2011, $110 million was loaded onto cards via Starbucks mobile apps. The mobile figure equates to just under 5 percent of all reloads, but does highlight a shift in how customers engage with Starbucks cards. “Customers love the ease of [Starbucks card] reload and autoload on their apps,” Brotman said.

Mobile app users are also tapping the company’s e-gifting feature to send the electronic gift of Starbucks from their phones. E-gifting was added to the apps in June — it was previously available as a web-only feature — and now accounts for 10 percent of total e-gifting volume.

The company’s early successes on mobile have allowed it to experiment with apps like Starbucks Cup Magic, a one-off holiday application released in mid November that adds a layer of augmented reality to the in-store experience. An app user can point his device’s camera lens at a holiday character on Starbucks cups, coffee bags or in-store signage, and watch the character come to life. The app has been used in this capacity more than 450,000 times to date, Brotman said.

Starbucks also now has 3.6 million customers in its My Starbucks Rewards loyalty program, and 2 million members have reached the highest Gold level.